Language is a hallmark of higher ordered creatures. Humans have developed a highly complex process involving the organization of thousands... 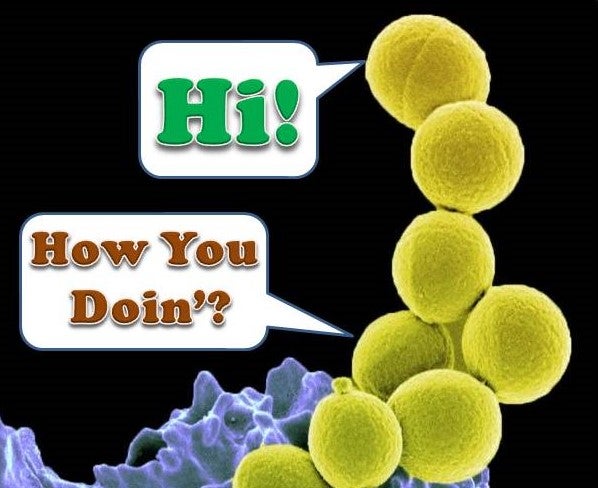 Language is a hallmark of higher ordered creatures. Humans have developed a highly complex process involving the organization of thousands of words, each of which comprises a meaning. Yet, we are not alone in the ability to talk to one another. Over the last few decades, researchers have shown animals also have the ability to communicate, albeit rudimentarily.

The majority of speculative studies happened in the 1950s and spawned a series of findings each suggesting language is used universally. The methods differ from us, manifesting in facial expressions, body gestures, vocalizations and even odors to convey a message. Yet, there was little doubt communication and even language was conserved throughout evolution. It was only a matter of time before the same hypothesis would be made for single-celled organisms, including microbes.

Although microbial language theory began sixty years ago, detection of this ability wasn’t fully explained until 1994, when the bacterium, Pseudomonas aeruginosa, was found to communicate with other cells. The method was chemical in nature, in the form of N-acyl-L-homoserine lactones (AHLs). Each AHL provided a signal that caused other nearby bacteria to react in a certain way. The language was called quorum sensing (QS) and was considered to be the base for social interaction. With increased searching, QS was found in several other microbes including Staphylococcus, E. coli, Salmonella and even fungi.

But while the hunt to characterize QS in bacteria was in full swing, the attempt to decipher the linguistics behind this phenomenon was having limited success. Although evidence revealed these signals were involved in antibiotic resistance, increased virulence during infection and even the performance of mathematics, researchers still had a problem in translating signals into language. The problem lay in the inability to identify specific mechanisms between the AHLs and the response of the community.

To overcome this, in 2004, an international team of researchers moved away from the AHLs in the hopes of finding a microbiological Rosetta Stone. They developed an artificial network based on another signal molecule, acetate. The results revealed acetate was indeed akin to a word or phrase, such as grow, drawing a reaction from the community. When acetate was ‘uttered’, other bacteria grew in earnest. When the acetate levels dropped, so did the bacterial numbers.

The results suggested that the theory of signals as words was valid. By 2009, several other messages had been found including prompts to increase virulence (attack), form molecular shell (cover up), swarm (move), produce bioluminescent molecules (glow) and clump together (huddle). Yet while the vocabulary was growing, one message continued to come up leaving researchers frustrated and public health officials worried: resist antibiotics.

Antibiotic resistance is a complex process utilizing a number of different signals. Studies to understand this communication, however, has led to more questions than answers. The main issue deals with the discovery of combinatorial messages. Unlike the simplistic design of the artificial network, in the real world, multiple signals could work with one another leading to a number of possible reactions. Bacteria were not only limited to one-word conversations but could string a few words together as a phrase. Even more intriguing, they might even have the ability to communicate much like higher order organisms.

To prove this, a suitable model had to be developed. Last week, a team of researchers out of the United Kingdom provided one such example of microbial linguistics. They chose two distinct signals, 3-oxo-C12-HSL (huddle) and C4-HSL (cover up) and sought to find whether these signals would produce different reactions in Pseudomonas aeruginosa when used either additively or in combination. The group found, much to their surprise, the addition of these two signals at the same time differed significantly from adding them in sequence. Instead of a general consensus to move in one directional response, seen with individual stimulus, the bacteria displayed a number of different reactions to the combined messaging.

The authors suggested their observations may have been caused by one of two linguistic mechanisms. The first would be a ‘horn and bell’ approach in which the meaning of the two phrases, as divergent as they were (huddle and cover up), would lead to a mixed reaction. The other, which they believed to be true, was the fact the mixing of the two phrases created a composite message that had an entirely unique – and perhaps unknown – meaning. This suggested bacteria, or at least P. aeruginosa, have a cognitive ability to discern mixed messages.

Though the data is preliminary, the door is open to more cognitive studies in bacteria and the decoding of combinatorial communication. With continued studies in microbial linguistics, we may one day be able to understand the language of the germs and learn how to talk to them. For public health officials, this serves as a prime opportunity to find new ways to prevent infection and manage menaces through directives rather than weapons. For the rest of us, the knowledge may finally give us the chance to reach out to the germs and through communication, find that ever distant goal of peaceful co-existence.