Transforming clinical studies, one app at a time 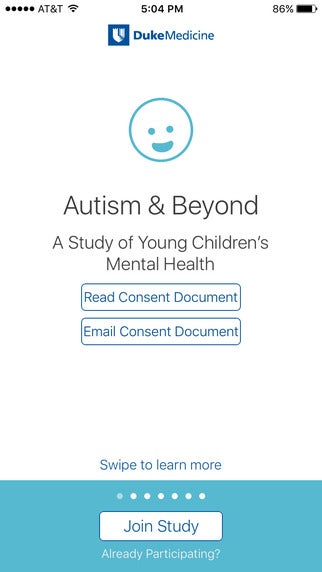 Duke University and Duke Medicine are launching “Autism &Beyond”, which will use the iPhone’s front-facing camera and a new, emotion-detecting algorithm software to analyze a child’s reaction to videos watched through the iPhone. Duke University
SHARE

Apple announced yesterday that it is planning to use its ResearchKit platform to study three huge health problems: epilepsy, autism, and melanoma.

ResearchKit is Apple’s open-source health software platform that lets researchers design apps for medical research. It was launched seven months ago, and has already been used by researchers across the country to study diseases including Parkinson’s and asthma.

Now research institutions are launching three new apps. Combined with the tools already available on ResearchKit, the company hopes the apps will allow more people to participate in clinical trials, which will provide researchers with more data from a diverse background–a crucial component for studying how and why certain diseases occur.

With ResearchKit, researchers can study participants from around the world, not just near where the study is based. And with the help of the open source platform, researchers can incorporate the iPhone’s camera, accelerometer, microphone, gyroscope, and GPS sensors into their studies. Here are the three latest apps and how they will work: