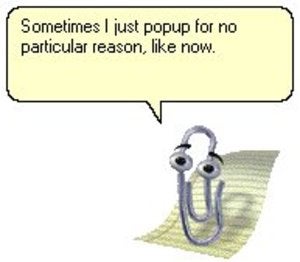 Remember Clippy, the annoying pop-up virtual assistant that would always dispense “helpful” advice, until you wanted to virtually bend it out of shape? Well, despite it getting axed several years ago due to across-the-board hatred, and getting called “one of the worst software design blunders in the annals of computing”, Clippy has inspired the Department of Defense to fund the creation of a bevy of new virtual assistants. WTF, DARPA?

The new project is called CALO, or Cognitive Assistant that Learns and Organizes. It has been in the works since 2003, and consists of the combined work of 60 different universities. Scheduled for completion this Friday, it will constitute the largest non-classified AI project ever. What sets CALO apart from Clippy (hopefully), is the ability to “learn in the wild,” by quickly adapting to the preferences of the user. This could make CALO a truly helpful organizer of emails and schedules, and less of a smug nuisance.

One of the first CALO assistants that will hit the market is an iPhone app called Siri. A voice-activated program, Siri can be asked to find the best restaurant in the area, give you reviews for movies you want to see, even call you a cab. This could save you the need to navigate several websites on your iPhone.

Also on the docket is a program called Social Kinetics, which helps organize contacts by weighing your relationship to them. The military already uses the system to analyze the flow of information through the ranks. Social Kinetics will be tailored for civilians to organize healthcare by helping patients match up with the specialists they need.

Microsoft tried to create a virtual assistant but ended up creating a universally hated monster. Pitchforks and torches worthy monster. DARPA thinks they’ll be more successful. Who knows if this was the best allotment of funds, but I’ve got one suggestion for DARPA to help make sure CALO stands a better chance than Clippy did: don’t make the avatar look like a paperclip, a butler, a genie, a robot, a parrot, or a dolphin.