Finally: a flash camera without all the usual problems. By using a flashbulb that emits ultraviolet and infrared light (neither... 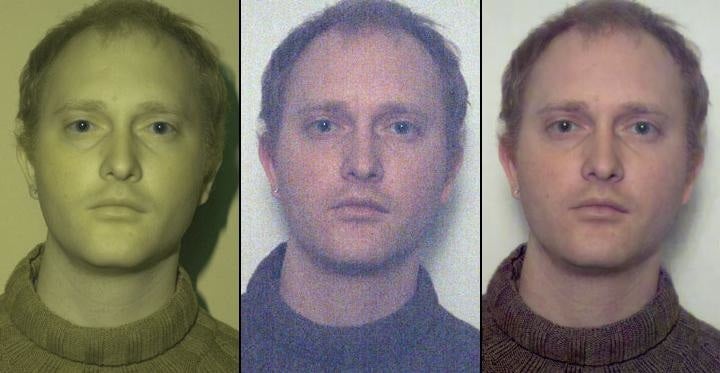 Finally: a flash camera without all the usual problems. By using a flashbulb that emits ultraviolet and infrared light (neither of which the human eye can detect) instead of visible light, New York University’s Dilip Krishnan and Rob Fergus have come up with dark photography that will neither blind your subject nor produce the unwanted glare of a harsh flash in the developed photo.

On their own, IR and UV exposures produce photos that have strange, unrealistic coloring. But Krishnan and Fergus have taken care of that as well. Their system processes IR and UV exposures into true color by combining two photos taken in quick succession into a superior final image.

Their camera first takes a photo with an IR/UV flash, which produces an image that has clearly illuminated detail but the wrong color palette. Following this first shot, the camera immediately takes a second shot with no flash; this one gives the camera the right coloring, but, without enough illumination, has a grainy, blurry look. Finally, Krishnan and Fergus’s software merges the two photos into an image that has both fine detail and correct hues.