Darpa’s Self-Feeding Sentry Robot is Not a Man-Eater, Company Protests

"We completely understand the public's concern about futuristic robots feeding on the human population, but that is not our mission," says CEO 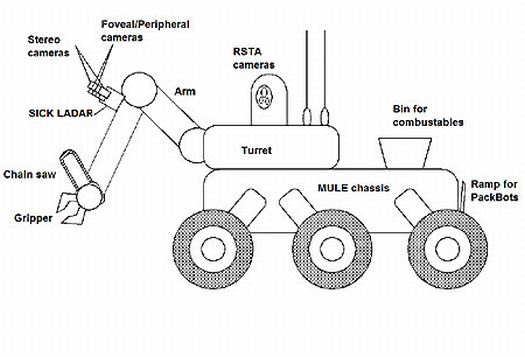 There hasn’t been such a scare over the future of green since Soylent Green. But a DARPA-funded robot that forages for biomass will only consume plant matter, as opposed to dead bodies or wayward pets, its creators assure us.

The makers of the Energetically Autonomous Tactical Robot (EATR) have issued a statement saying that “this robot is strictly vegetarian,” after news outlets ranging from Fox News to CNET pounced on the flesh-eating potential of the bot.

“We completely understand the public’s concern about futuristic robots feeding on the human population, but that is not our mission,” said Harry Schoell, CEO of Cyclone Power Technologies. “We are focused on demonstrating that our engines can create usable, green power from plentiful, renewable plant matter.”

EATR, handily equipped with a gripper-and-chainsaw arm up front for capturing and dismantling its food, currently targets only twigs, grass clippings, and wood chips. Cyclone and RTI also added that desecration of the dead constitutes a war crime under the Geneva Conventions, and “is certainly not something sanctioned by DARPA, Cyclone, or RTI.”

That doesn’t mean an engine fueled by a biomass furnace couldn’t consume animal matter or dead bodies, as we previously suggested. But it’s good to know that researchers are not plunging blindly down that grisly path.