Hubble Captures Earliest Views Yet Of The Universe

The deepest images taken to date show the universe when it was only 3 percent of the age it is now. 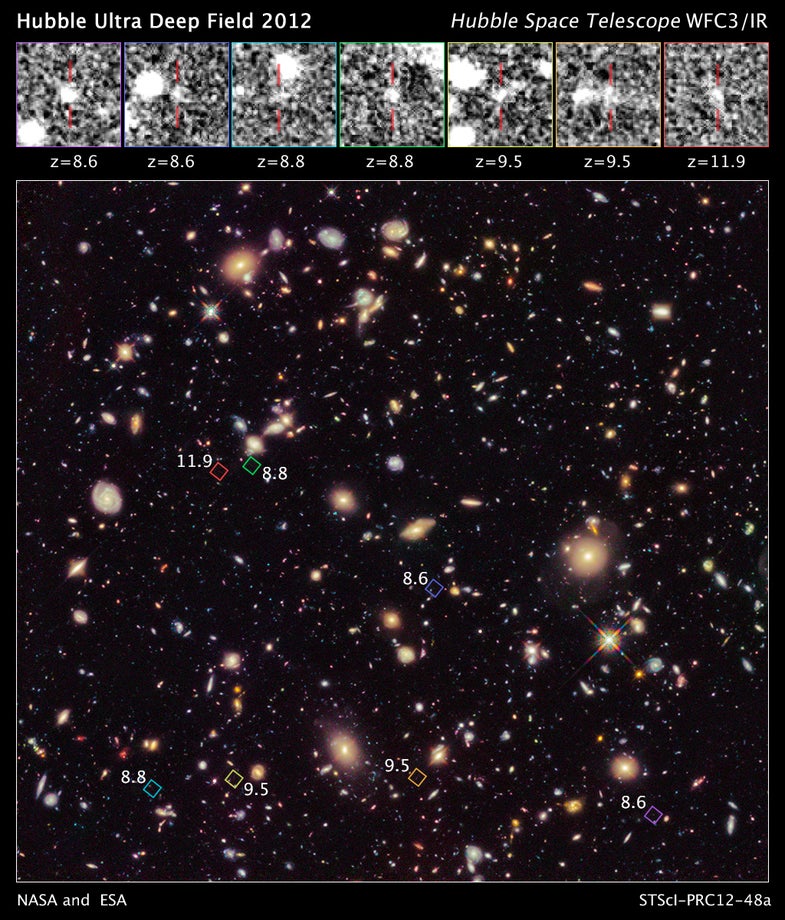 Ever since the Hubble Space Telescope’s final upgrade, astronomers have been able to push it farther and farther in look-back time–that’s a technical term–to the infancy of the universe. Now they have seen the deepest views yet, and found a previously unseen group of primitive galaxies that formed when the universe was just 3 percent of its present age.

This is important because it provides clues about the abundance of the first galaxies, which can help answer questions about their formation rate and how this affected the growth and evolution of everything else.

The new observations came from the Hubble Ultra Deep Field, a specific patch of sky that Hubble has stared at for very long periods to gather lots of distant light. In this case, a team led by Richard Ellis of Caltech made observations over six weeks in August and September, using the Wide Field Camera 3. That particular piece of hardware was installed during the Hubble’s final servicing mission in 2009. The galaxies it views are seen as they appeared just 350 million to 600 million years after the Big Bang, and their light is just getting here now. These longer exposures will help astronomers probe the earliest ages in cosmic history.

The result is the first reliable census of this epoch, as put by the Space Telescope Science Institute in Baltimore, which operates Hubble and its forthcoming descendant, the James Webb Space Telescope. It helps constrain some theories about what’s called the epoch of reionization, a sort of universal re-heating of hydrogen that happened a few hundred million years after the Big Bang. The new galaxy images show that galaxies formed gradually, slowly gathering up elements and stars; this suggests that reionization was also a slow, gradual process. The JWST and its near-infrared abilities will help astronomers study this in greater detail.

“Although we may have reached back as far as Hubble will see, Hubble has, in a sense, set the stage for Webb,” STSCI team member Anton Koekemoer said in a statement. “Our work indicates that there may be a rich field of even earlier galaxies that Webb will be able to study.”