Mercedes-Benz’s Future Is The “Transformer” 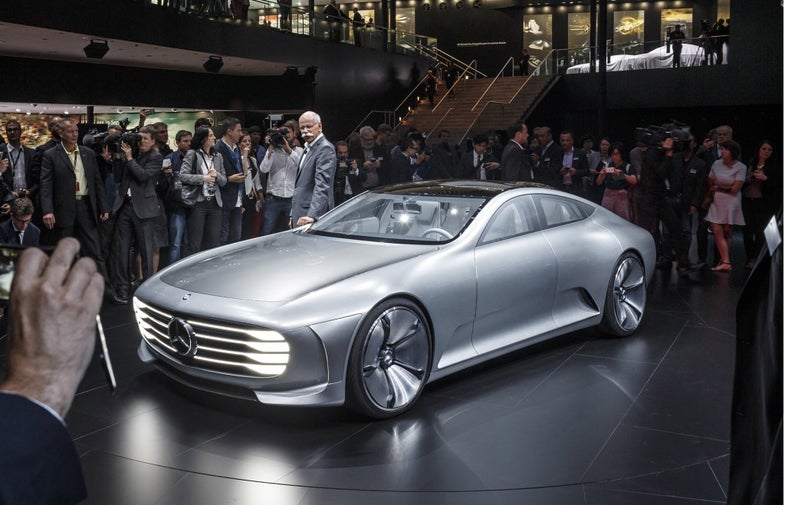 Like most automakers, Mercedes-Benz is studying the future of the automobile and building concept cars to predict that future. The night before the 2015 Frankfurt Auto Show, Mercedes-Benz unveiled its latest concept, the Intelligent Aerodynamic Automobile (IAA), to a gathering of journalists.

A four-door coupe, the IAA may preview the design direction for the next generation of the CLS. More importantly, however, it hints at a future that could include greater use of active aerodynamics.

We’ve seen active grille shutters before, but this vehicle takes that idea much further. Mercedes calls it a “transformer,” and says that above 80 kph (about 50 mph) several exterior changes take place. In addition to active grille shutters, the flaps in the front bumper move outward and rearward to improve the airflow to the wheels and over the wheel arches. The louver in the front bumper also moves rearward about 2.4 inches to improve airflow to the underbody. The five-spoke wheels fill their gaps to become flat discs with far better aerodynamics. Finally, a rear extension juts out more than 15 inches to create a boattail effect that makes the air hug the vehicle more closely and create a smaller area of turbulence behind the car.

The total effect of these measures lowers the car’s coefficient of drag from 0.25 to a very slippery 0.19. In the ever-evolving search for greater fuel efficiency, these types of measures could make their way to production vehicles in the future.

The IAA’s interior will likely be more important in the near term, as Mercedes says elements of it will soon appear in one of its “business” sedans. We’re guessing that’s the next E-Class, which should be shown later this year at the Los Angeles Auto Show or early next year at the Detroit Auto Show. The IAA features a fully digital head unit with two side-by-side 12.3-inch screens capable of showing real-time graphics that Mercedes says otherwise exists only in Hollywood movies. It also has a new touch-based operating surface that Mercedes claims will let drivers better concentrate on the road. We’re guessing both of those features are in store for the new E-Class.

The car is 198.4 inches long and has a wheelbase of 117.1 inches. It is 78.5 inches wide, and 51.4 inches tall. Power is derived from a plug-in hybrid powertrain with a gasoline engine for a total output of 279 horsepower and 41 miles of electric range (the latter in aerodynamic mode). The top speed is electronically limited to 155 mph.

Mercedes used a completely digital process which allowed the company to develop the IAA in just 10 months instead of the usual 18 for a concept car. Digital prototyping accelerates the development of new generations of cars—but more than that, it also raises their quality and offers opportunities for increased diversity. This is because it allows the development team to simulate and optimize the design from the earliest stages.

“Before we let a new car anywhere near our wind tunnel, it has already successfully passed a barrage of digital tests as a complete data model,” Mercedes R&D boss Thomas Weber explains.