These machines were supposed to help win the war in Afghanistan. What happened?

In 2002, PopSci explored the tech the US was deploying in the conflict's early days. Here's what to know about these airborne tools of war, past and present. 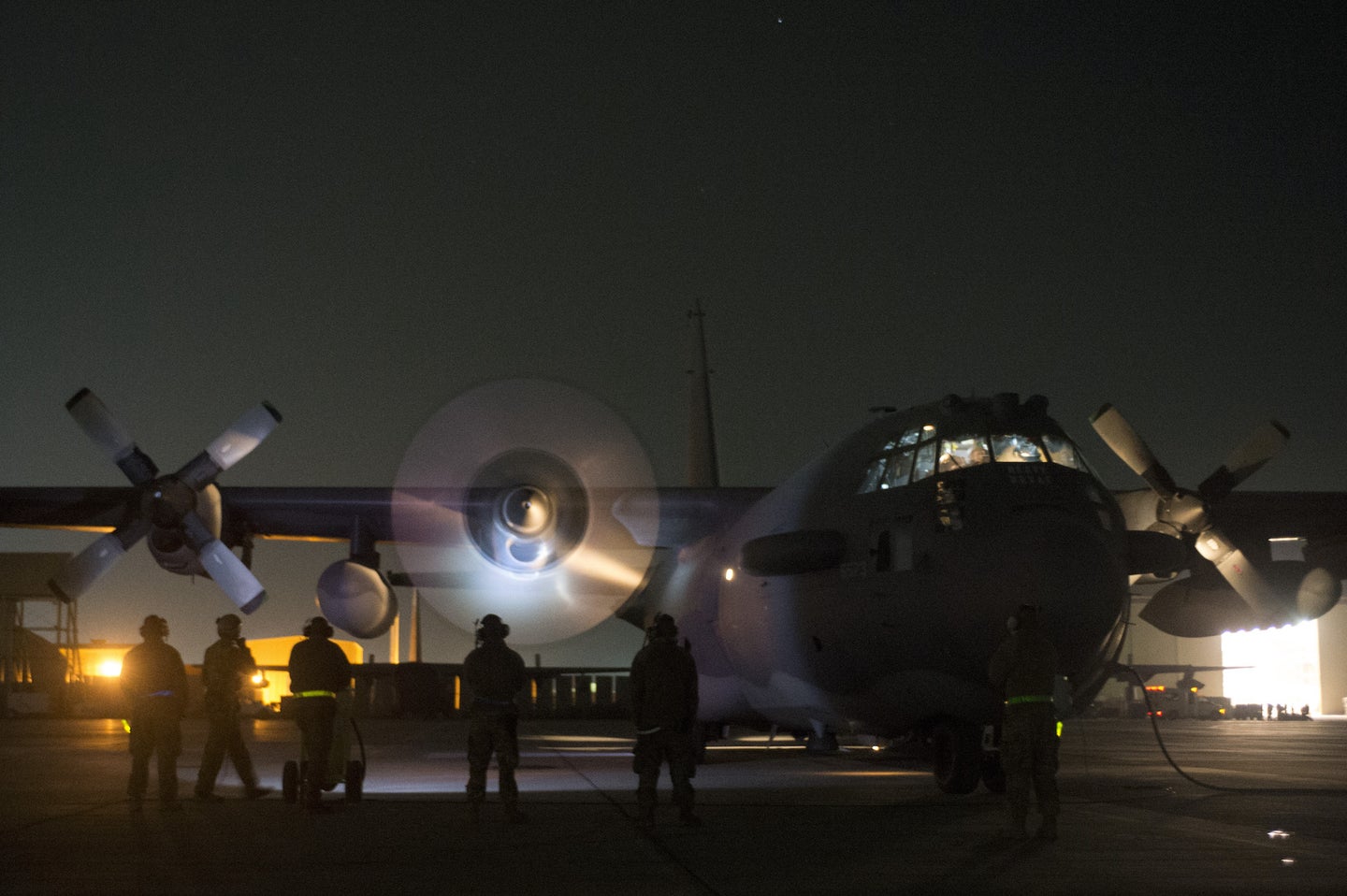 This week the world has witnessed the stunning, historic takeover of Afghanistan by Taliban forces, marking a dramatic end chapter to roughly two decades of American-led war.

As recently as May, the United States maintained a network of bases across the country, supporting the government it had backed for nearly 20 years in an ongoing war. This week, the number of troops deployed by the United States has quadrupled from the 2,500 it was in May. Meanwhile, the area of US control has shrunk to just Hamid Karzai International Airport, where the United States is overseeing evacuations of foreigners and vulnerable populations out of Afghanistan.

The flights out have seen heroic feats, like the C-17 transport that carried out hundreds of people. There have also been fresh tragedies, with Afghan witnesses reporting between three and four people falling from the outside of a plane, before crashing onto houses near the airport. Human remains were also found inside the wheel well of a C-17 after it landed at Al Udeid Air Base in Qatar, according to an Air Force spokesperson.

The airport, located in the country’s largest city and capital, is named for the long-serving former president of the Islamic Republic of Afghanistan, a government that existed in July and may not anymore. The Taliban, a group that once ruled most of the country and waged a decades-long insurgency to reclaim it, proclaimed the Islamic Emirate of Afghanistan today.

The shocking events are the latest chapter in a war that saw the direct arrival of American troops in October, 2001, when the United States arrived leading a multinational invasion against the Taliban. This invasion followed the 9/11 terror attack by al Qaeda on the United States, which was planned and coordinated from training camps inside Afghanistan.

[Related: The Taliban have seized crucial US military equipment, including data on Afghans]

But for Afghans, their long years of war began far before that, with a palace coup in 1979, which then led to a decade-long occupation by the Soviet Union, who fought that entire time against a coalition of armed insurgents in Afghanistan. After the USSR left in 1989, regional warlords fought and factions coalesced, with the Taliban consolidating their control over most but not all of the country by 1996.

With an advance timed to the planned and negotiated US withdrawal from the country by September 11, 2021, the Taliban swept from a position controlling roughly a third of the country at the start of 2021 to virtually all of it by August 16, 2021. The week of August 9 to August 16 alone saw cities capitulate so quickly one after another that media reports and maps of the conflict became outdated within hours of publication.

Over the nearly two decades of direct US involvement in this war, between the eras of Taliban rule, over 170,000 people were killed in the violence. These numbers include an estimated 66,000 Afghan national military and police, and estimated 51,000 Taliban and other insurgent fighters, and a minimum of 47,000 Afghan civilians. (A higher estimate, by the Costs of War project at Brown University, places the total dead in fighting that spanned Afghanistan and neighboring Pakistan at 241,000 people, with at least 71,000 of those civilians.)

Observers are still figuring out what led to the rapid collapse of the Afghan National Defense Forces, which came just over a month after the United States had vacated the massive Bagram Air Base it used to headquarters much of the war effort. It is a rout with both immediate and likely much deeper seeded origins. The consequences of that abrupt end, from feared reprisals to the diminished futures under a deeply different vision of government, have led to a rapid exodus from the country, especially among Afghans who worked with the United States.

The rapid advance of the Taliban, from partially contested territory to seemingly total sovereignty over the whole of the country, is the second such rapid advance by soldiers in the country since October 2001. That first advance, by the US and allies and in support of other militias opposed to the Taliban, took place from October through December 2001.

In February 2002, PopSci took a look at the machinery of the US war in Afghanistan. Titled “War Report,” it was written as “troops were on the ground and phase 1 of the war was ending.”

As the likely last phase of the US role in the war in Afghanistan draws to a close, it is time to revisit those weapons. The story of the war is much more than the machines used in fighting it—wars are prosecuted by people, of course—but the machines matter because they are a broader part of that process. Looking at how the weapons were used and heralded on their first use in the war in 2001 offers some insight into what changed, and what didn’t, in the intervening decades of combat.

Five aircraft were featured prominently in “War Report” for their role in the dawn of the war. Many of them are still flying today, at the sunset of the war.

The Air Force’s longest-serving bombers were already old by the start of the October 2001 invasion, and are now practically ancient. As War Report acknowledged, “the newest of the B-52s used in Afghanistan was built in 1962, long before many U.S. airmen were even born.”

In the 2002 story, the B-52 is stated as capable of unloading up to 37,000 lbs of bombs in one run, while a 2019 Air Force fact sheet says the capacity is now up to 70,000 lbs of weapons, counting bombs and missiles. The “Internal Weapons Bay Upgrade” program is largely responsible for that increased capacity, and is just one of a host of life-extension upgrades for the plane. The B-52 fleet still regularly sees service, including an attempt to halt the Taliban advance across Afghanistan as recently as August 6.

Also flying above the skies of Afghanistan this August were AC-130 gunships, which first flew into action against the Taliban in 2001. Operating almost like an 18th-century ocean-going ship, the AC-130U “Spooky” gunships that flew in 2001 had three big guns sticking out of the left side of the craft, which it would fire while circling people, buildings, or vehicles below. These weapons include a gatling gun for use against light vehicles (like trucks), an anti-aircraft cannon that can be fired at longer range than the gatling and with somewhat more accuracy, and a howitzer artillery piece, used to destroy buildings.

The Air Force formally retired the AC-130U gunships in 2019, replaced by the similar AC-130J “Ghostrider.” The Ghostrider features a similar array of guns, and adds to that package several bombs and missiles, including the Hellfire missile common on armed drones.

Alongside the B-52s and AC-130 gunships that attacked Taliban forces this summer were MQ-9 Reaper drones, the direct descendant of the more-famous Predator drone. (The lineage is so direct that Reapers flown by Customs and Border Patrol are known as Predator-Bs.) In 2001, Predators flew above Afghanistan.

Predators had seen war before, flying above Bosnia and Kosovo and other countries in the Balkans in the 1990s. In fact, Predator drones based in Uzbekistan even flew over Afghanistan in the summer and fall of 2000. These Predators were operated by both the Air Force and the CIA, and were unarmed surveillance planes, useful for directing other aircraft to a target but incapable of launching attacks with weapons of their own.

Arming Predators with anti-tank hellfire missiles, which were lightweight and fast and could kill clusters of people as well as destroy vehicles, fundamentally changed the role of drones in the war. By February 2002, remote pilots using Predator drones had successfully launched fatal attacks against people linked to al Qaeda in Afghanistan, a role Predators would pursue there and above countries like Yemen and Somalia for years, until all Air Force Predators were retired in March 2018, with their job replaced by Reapers. (The Gnat, an even earlier drone that led to the Predator, was also flown over Afghanistan in 2001).

The Global Hawk is as massive as drones go, and capable of flying for over 30 hours continuously. (As a remotely piloted vehicle, that means switching remote pilots multiple times while the Global Hawk is airborne.) The cameras on the Global Hawk allow it to scan vast sections of terrain, letting one vehicle keep watch over entire battlefields.

Global Hawks are still in use today; one older model was famously shot down over the Strait of Hormuz near Iran in 2019. The Air Force is actively trying to retire more of its older models in less dramatic ways, though Congress has prevented that effort out of a concern that the absence of surveillance by these drones would impede US missions. Beyond cameras, the Global Hawk drones use high-resolution radar to track movements below.

Looking like a business jet with a long bulge underneath the fuselage, the E-8C Joint Surveillance Target Attack Radar System (JointSTARS) is a modified Boeing 707 jet. The E-8C saw action in the 1991 invasion of Iraq. Its flight crew of four keep the plane airborne, while a “mission crew” of people across the Air Force and Army operate the sensors inside. The long radar built into the belly of the craft is the chief tool of the plane, and it can look for vehicles moving on the ground up to 150 miles away.

“The radar system acts much like a VCR in the hands of one of the 18 operators onboard the plane,” said Popular Science in a phrase that perfectly dates the story to 2002, “who can fast-forward through images recorded during the previous 6 hours or run them backward to show, for example, where a column of vehicles originated.”

Radar is built to track movement, so if a vehicle stops moving, the human crewing the radar can record the stop for when movement starts again. Once the E-8Cs arrived over Afghanistan in 2001, they stayed in the broader Middle East for 18 years, moving on to other theaters and other missions in 2019. The Air Force plans maintenance and upgrades to keep the fleet flying into the 2030s.