This high-tech gunsight could allow soldiers to shoot around corners, Matrix-style

The system includes an AR display, and it's designed to attach to a traditional rifle, like an M4 carbine. 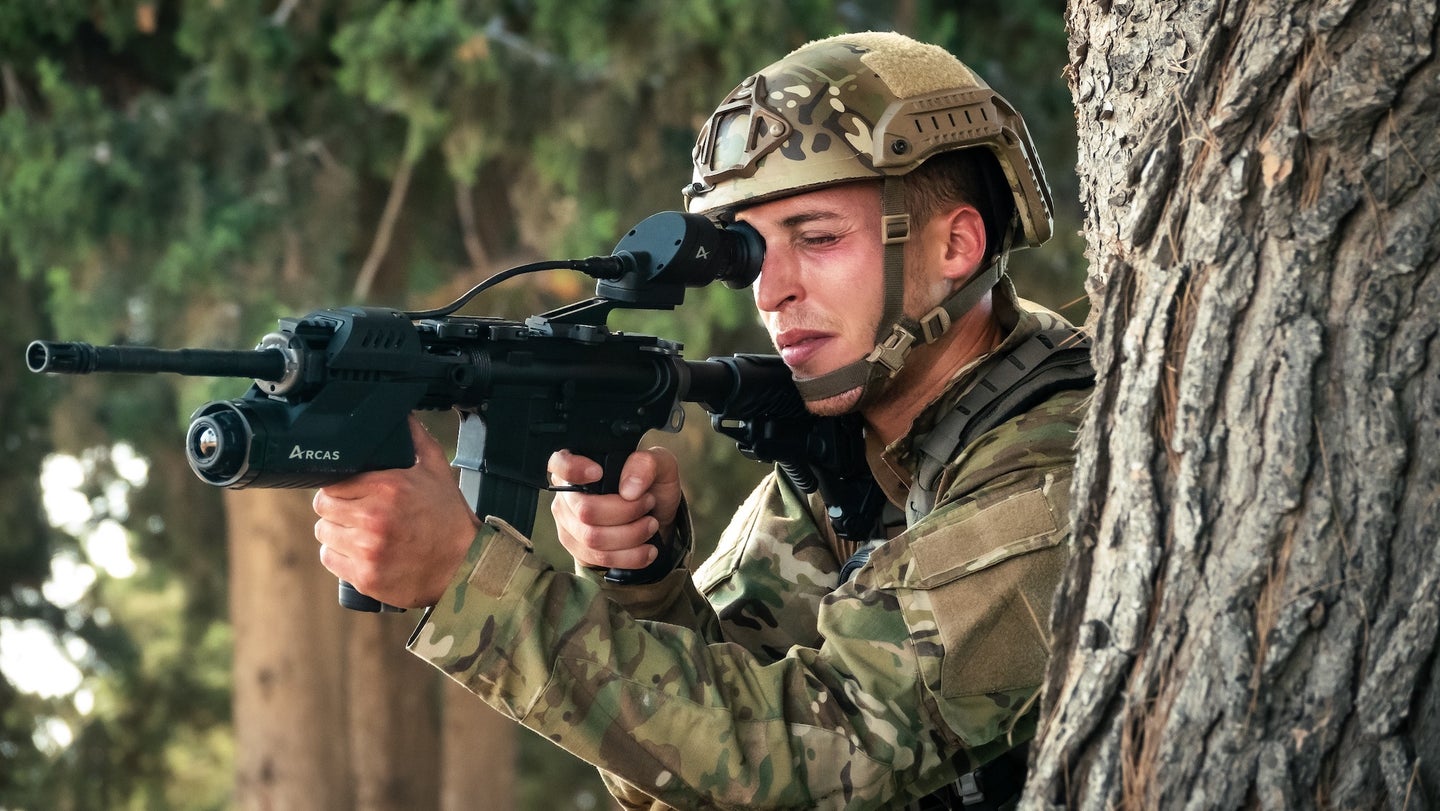 On September 9, Israel defense company Elbit announced the ARCAS, or Assault Rifle Combat Application System. The device is a combination of a gunsight, operating system, and an augmented reality display. If it proves useful in combat, it heralds a future in which soldiers not only aim rifles, but where the rifles tell soldiers information about who they are aiming at.

ARCAS is an after-market add-on to existing rifles, converting the familiar weapon of infantry into the central node in an array of sensor-rich technologies. Elbit is marketing it for both Special Operations forces, who are accustomed to training with specialized gear, and regular infantry, who need weapons to be dead simple.

The laundry list of features that ARCAS adds to a rifle include features that help a soldier shoot more accurately, like passive range measurement and automatic ballistic correction. With the right sensors, ARCAS can detect where hostile gunfire is coming from, and let the wearer know of any movement seen on its video cameras. By allowing the soldier to aim through a camera connected to a heads-up display, the rifle can be fired from the hip and around corners, two kinds of shooting difficult to pull off with a traditional down-the-barrel sight.

Other features of ARCAS seem more like replacements for the radios and tablets carried into battle. These include a way to “interface with tactical Command and Control,” which is a fancy way of saying “talk to the officer in charge,” and “navigation assistance,” or a map with routes shown on a heads-up display.

An additional set of features resemble what players can expect in a video game, and indeed, that’s by design. One such tool is “friend and foe identification,” the former of which is easy to identify if the friendly soldiers’ uniforms’ are set up for detection, the latter of which is tricky without some known characteristic of the foe broadcast in a way sensors can receive. The ARCAS can also track ammunition remaining, inform the soldier if there’s a blockage in the gun, and can help someone using the gun precisely calibrate their sight without needing to test with live fire.

[Related: The Army is giving its gun sights a seriously high-tech upgrade]

That is a tremendous amount of promise to fit into a physical form that is, mostly, a forward grip with a computer and a camera inside, attached to a rail-mounted sight, powered by a battery and all designed to fit on existing firearms.

The camera can pick up heat as well as visual light. Some versions of ARCAS can be connected to other rifles equipped with ARCAS, allowing information to be shared over Wifi and Bluetooth. The system can also connect to other weapons and sensors over a mesh network, allowing soldiers to communicate with each other through their rifles without needing additional communications support. It is also, as designed, capable of running other software applications built for the system, making it a platform in the Silicon Valley sense of the term.

The M4 carbine is a rifle used by many militaries, including Israel’s, and Elbit’s display of ARCAS systems appears to be mounted on M4s. The M4 has an effective range of 1,640 feet. Lots of combat, especially in the urban areas of the occupied territories where Israel’s soldiers often fight, can take place at much closer ranges, ranges where the difference between detection, recognition, and identification are meaningful. In open plains or at range, the ARCAS promises to let soldiers know of threats before they can shoot them. In closer quarters, the system offers the potential for an AI-assisted assessment of the human’s identity.

A video produced by Elbit for the release of the weapon envisions a training scenario for the ARCAS. In a laboratory, a soldier clad all in black goes forth into a digital landscape, a sort of retro-futuristic setting. With a press of a button in the forward gun grip, the soldier sees an illuminated path through the terrain to his objective. This map and route are visible to others. Upon reaching rifle range of the objective, enemies are illuminated in bright red against the soft turquoise glow of the heads-up display. The rifle adjusts automatically, finding the center mass.

The camera zooms back, showing the video’s protagonist joined by seven other soldiers all connected by invisible lines of communication. In moments, with a live display of remaining bullets in the rifle, the soldier shoots four enemies, and arrives in the center of the simulation unscathed.

Promotional material, like the Elbit video, do not make room for all the ways in which these new advances could disappoint. Any system that allows remote identification of friendly forces could be turned, instead, to reveal them as targets to a sufficiently prepared and capable foe. Sensors are always susceptible to spoofing, or being fed false information. This is to say nothing of the capacity for simple underperformance—of a rifle that misreads the number of bullets left, or of one that misidentifies a civilian as an enemy.

Watch the video, below: