Robots, monkeys, and humans form an alliance against disease. 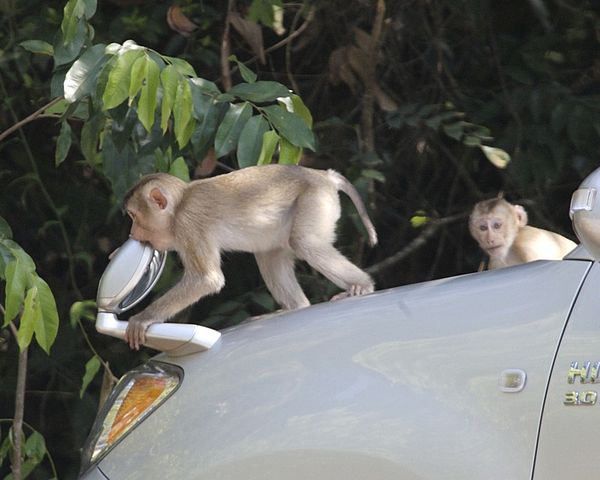 In the jungles on the island of Borneo, flying robots are following monkeys. These drones aren’t part of a sinister pre-emptive strike against the Planet of the Apes. Instead, they’re trying to find the source of new malaria outbreaks among the monkeys. It’s the best the future has to offer: humans using robots to save monkeys from disease.

“Mapping infectious disease landscapes: unmanned aerial vehicles and epidemiology,” a study published Wednesday in Trends in Parasitology, details the project. Researchers flew 158 drones flights between December 2013 and May 2014 to map the habitats of two species of macaques. Just like humans, monkeys can also get malaria, and tracking these outbreaks within certain populations can be beneficial for both macaque health and human health. Normally, humans and monkeys don’t get the same kinds of malaria, but sometimes a variant can cross from monkey to human or vice versa.

The drones used were lightweight Sensefly eBees, which can fly for up to 50 minutes at a time and take 16 megapixel images of the landscape below. The drone flights provided accurate information about the area, and did so even as it changed. From the study:

Changes in the landscape, like cutting forests to make way for a plantation, can create new conditions that better foster malaria-carrying mosquitos, posing a risk to both the macaques and humans living in the area. In the past decade, a variant of malaria native to certain macaque species in southeast Asia has infected humans, which is a new development and might have to do with both changes in the environment and human-macaque interaction. On top of these drone-provided maps, researchers added movement data from humans carrying GPS trackers and macaques collared with trackers. This movement data, combined with the new drone-made maps, is a boon to public health.

Tracking malaria among macaques is just a case study. In the future, drones could respond to epidemics as they happen, providing information that people can’t or won’t provide. In the war on disease, humans (and monkeys) might just have found some robot allies.