Inflatable Incubator Could Save Premature Babies

But we're not sure why it's shaped like a toaster oven

Over a million children die each year due to complications of preterm birth, according to the World Health Organization. Developing nations are plagued with high infant mortality rates, where much of the population does not have access to trained doctors or expensive preterm birth care equipment. A new invention named MOM could give premature infants in impoverished areas a fighting chance at life.

MOM is an affordable, inflatable incubator, and the winner of this year’s James Dyson Award. James Robert, a recent graduate of Loughborough University in England, inventetd MOM after he was inspired by a documentary on premature babies in refugee camps.

“James’ invention shows the impact design engineering can have on people’s lives,” said James Dyson. “The western world takes incubators for granted – we don’t think about how their inefficient design makes them unusable in developing countries and disaster zones. By bravely challenging convention, James has created something that could save thousands of lives.”

At $45,000 a pop, conventional incubation systems are pricey, and they’re much too bulky to easily transport to refugee camps. MOM solves both of those problems with its unique collapsible design. The thin plastic sheets which make up the main chamber of the incubator are relatively cheap to manufacture and easy to fold into a compact briefcase. The incubator is blown up manually on-site and heated electronically. Sensors monitor the humidity and temperature inside the device to create a comfortable atmosphere for the infant. A collapsible phototherapy unit is also included to treat babies with jaundice. And in case of a power outage, MOM is built to last an additional 24 hours off a car battery. 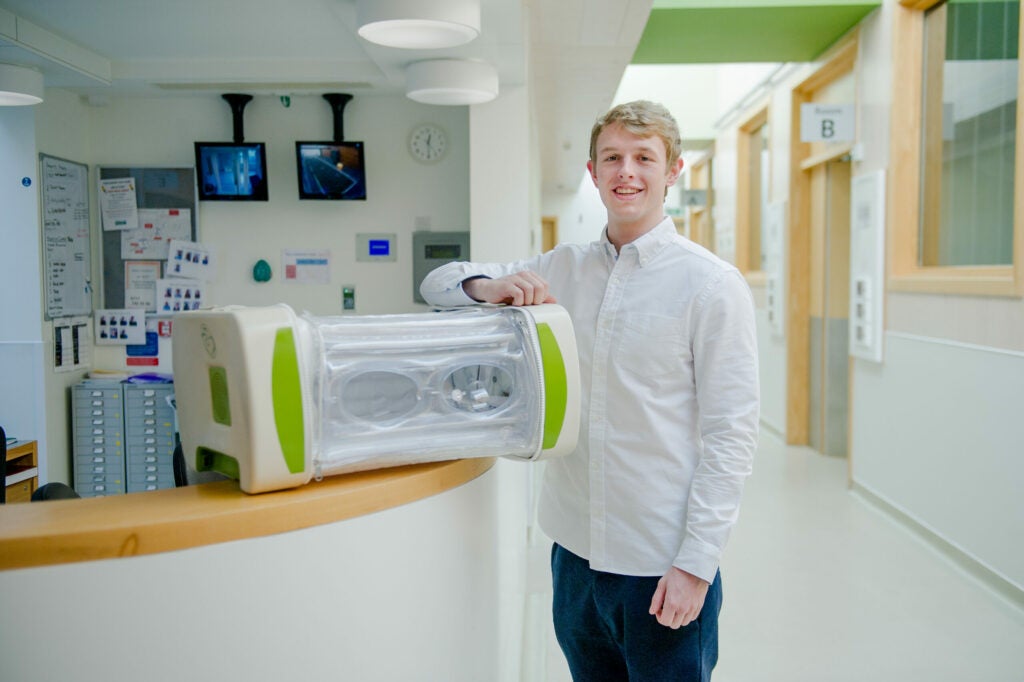 Robert, who said he sold his car to fund his first prototype, received $45,000 from the James Dyson Award. The money will go toward building more prototypes with the dream to see MOM go commercial.

“Its use needn’t be limited to developing world scenarios,” said Steve Jones, pediatrician at the Royal United Hospital in Bath, “I could see it being used in the U.K. to support community midwifery units, or following home births.”

MOM was selected out of 600 designs that aimed to solve a problem. Runners-up include QOLO, a wheelchair that both sits and stands, and Bruise, a smart injury-detection suit for disabled athletes with loss of sensation.