This river ecosystem hinges on thousands of drowned, rotting wildebeest

It's the circle of life. 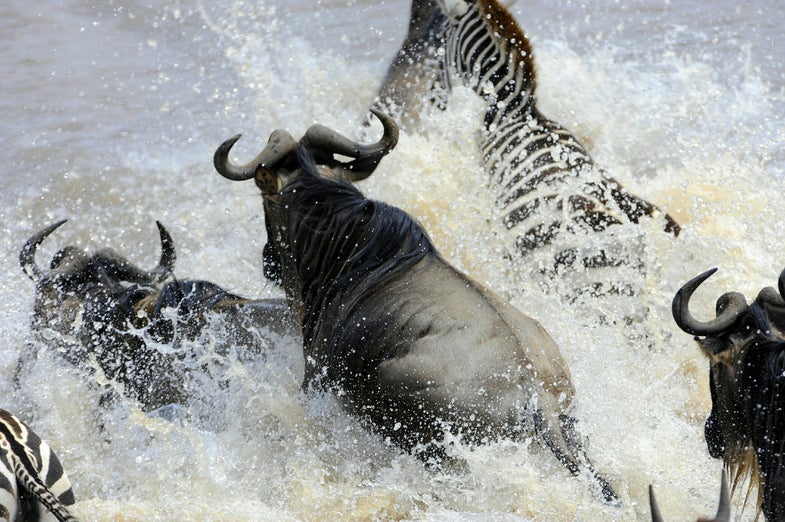 1.2 million wildebeest make dozens of river crossings each year. Not all of them make it. Flickr user RayMorris1
SHARE

When we die, our bodies become the grass, and the antelope eat the grass. And so we are all connected in the great Circle of Life. Everyone knows that classic line from Disney’s “The Lion King”. Kids and parents might have been slightly less charmed by this variation: The wildebeest must cross the river to eat, and a whole bunch of them die in the process. And then everything in the river gets to feast on their rotting remains. Oh, and their bones continue to leech nutrients into the water even after fish and insects have devoured their flesh. Other organisms also eats the algae that grows on the bones. Basically, some wildebeest need to die, Simba.

But that’s reality in Africa’s Mara River. According to a study published this week in The Proceedings of the National Academy of Sciences, frequent mass wildebeest drownings are crucial to the health of the Serengeti plains.

Around 1.2 million wildebeest travel through East Africa each year during their migration. The move—the largest overland migration on the planet—is necessary for their survival, helping them keep up with moving rainfall and find plentiful patches of tall grass. But their route takes them back and forth over the Mara river dozens of times, and not everyone makes it.

“They don’t move as a single 1.2 million wildebeest herd, they’re moving in packs of hundreds or thousands,” explains lead author Amanda Subalusky. “So at multiple river sites, on any given day, you have these huge packs crossing.” When conditions are particularly hazardous, an entire group can get swept up and drown en masse.

“A relatively small percentage of those crossings end in mass drownings, maybe one percent of the whole herd,” Subalusky says. “But that’s over 6,000 wildebeest every single year.”

That’s the equivalent of 10 blue whale carcasses getting dumped into a river that averages around 150 feet wide and is often only three or four feet deep. Pile-ups are quite common: Bodies bottleneck in the water and are left rotting in the sun. Obviously, that huge annual influx of fresh meat must have some effect on the local ecosystem. But Subalusky and her colleagues wanted to quantify it. After coming up with a formal estimate for the annual drownings—a trying task that required “counting as many carcasses as possible”—the team worked on puzzling together what all that meat meant.

“What does every carcass that goes in equal? What does it give to the river? We went after fresh bodies—ones that weren’t already attended by a crocodile or what have you—and dissected all the parts to figure out what nutrients they’d provide to the river, essentially rebuilding a wildebeest carcass piece by piece,” Subalusky says. Then, they tried to account for all of those nutrients in the river’s ecosystem. Where did all that wildebeest go?

Unsurprisingly, they saw plenty of scavenger activity. Animals traveled more than 60 miles to feast upon the remains, and generally came so quickly that it was difficult to catch an untouched carcass on the game cameras they set up. They also saw boosts in nutrient levels downstream, but not as much as they expected.

“They weren’t just rotting and releasing all their nutrients, letting them flow downriver,” Subalusky says. “Something was missing.”

They checked to make sure the nutrients weren’t getting caught up in microbial conglomerates known as biofilms and algae growths upstream, but the river’s generally high nutrient content didn’t leave a lot of room for hungry microbes to snatch up wildebeest remains.

The final piece of the puzzle came when the team looked at fish: Right after the mass drownings, fish were filling a full half of their diet with delicious wildebeest meat.

“It’s not super surprising,” Subalusky says. “You basically just threw a bunch of steaks in the river.”

Even months after the carcasses were gone, the researchers found signatures of wildebeest inside fish in the river. The swimmers were snacking on biofilms that only grow on bones. “The bones were like organic rocks, providing a medium for all these biofilms,” Subalusky says. Meanwhile, the bones continue to slowly leak nutrients like phosphorous into the water, giving just a little bit more back to the Earth long after the herd had succumbed. “It looks like a short lived pulse of nutrients in the system from the outside, but they’re actually lingering.”

To Subalusky, the big takeaway is that this kind of macabre was probably once incredibly common. “It’s kind of a window in time to when there were millions of bison and un-dammed rivers across the United States,” she says. “And a lot of our largest dinosaur beds have been linked to mass drownings. Understanding the role they play in shaping ecosystems is important in understanding how rivers that have lost their mass migrations might have been affected.”

And unfortunately, the Mara isn’t necessarily safe from that same fate.

“Over the years, so many people have worked to protect the entire migration corridor, crossing all sorts of borders and boundaries, which is a huge conservation success story,” Subalusky says. But there will always be threats to that: Discussions of a highway connecting western Tanzania to the coast have started to pick up again, along with talk of building hydropower dams to create more water storage for agriculture as climate change makes rain less predictable.

“It’s the age old balance of development and natural resources,” she says, adding that these infrastructure changes could obviously benefit the people who live in the region. It’s not as if all development can be halted forever.

“But you’re talking about huge changes in the sediment and natural flow regime of that river,” she says. “The migration really shapes every component of that ecosystem, so you’d likely see a domino of expected and unexpected effects. I guess we’ll just have to see.”