Has the lost continent been found? 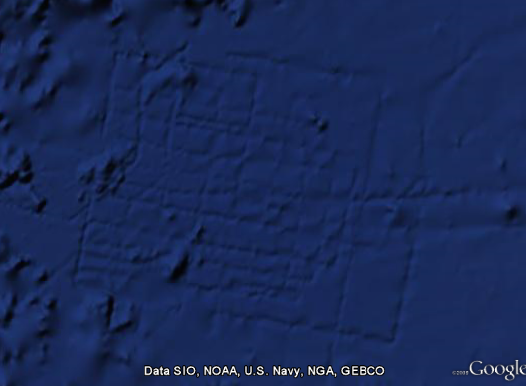 There’s no denying that Google Earth has changed the way we view our planet’s landscape. With a click of your mouse, you can “fly” around your own neighborhood, zooming in from space to street level. Curious about volcanoes? Dart over to the east coast of the Big Island of Hawaii and at times you can actually see the steam where lava enters the ocean. You can even explore the whitewater rapids on the Colorado River in the Grand Canyon.

But it was Google Earth’s “Ocean” layer that recently caused quite a stir among 3D geeks.

The ocean-mapping capability enables users to explore undersea features like the Mid-Atlantic Ridge, an underwater mountain range in the Atlantic Ocean, and the Lo’ihi Seamount, an up-and-coming volcanic island in Hawaii.

Last week, a strange-looking pattern off the west coast of Africa triggered speculations that the undersea marks might be the ruins of the lost city of Atlantis — a legendary island that, according to the Greek philosopher Plato, sank into the Atlantic Ocean.

But two scientists — Walter Smith of the National Oceanic and Atmospheric Administration and David Sandwell of Scripps Institution of Oceanography — say the explanation for the patterns is a bit less exotic: the marks are actually “ship tracks” created during the process of echosounding. Sunlight, lasers, and other electromagnetic radiation can only travel less than 100 feet below the ocean’s surface, but the ocean, on average, is more than two and a half miles deep. Through the process of echosounding, scientists measure the time it takes for sound to travel from a ship to the sea floor and back, which gives them an idea of how far away the seafloor is. But because the process involves mapping only a strip of the seafloor directly under the ship, the maps it generates often show the path the ship took — hence, the “ship tracks.”

If the markings were indeed the city of Atlantis, some of the city blocks would have to be over eight miles long, which is about 50 times the size of a New York City block. In reality, patterns like this can be seen over much of the ocean floor in Google Earth.

But what if we really wanted to find Atlantis? Smith and Sandwell say we probably couldn’t do it with satellites, because human-made structures aren’t big enough to be measured that way. But for about $2 billion, we could map the whole ocean using ships. A study by the U.S. Navy found that it would take about 200 ship-years (i.e., using one ship for 200 years) at an operational cost of about $25,000 per day. So for the price of, say, a new sports stadium, we might be able to locate Atlantis at last.