Earth has more than 10,000 kinds of minerals. This massive new catalog describes them all.

If you consider how and where a diamond was formed, you end up with nine different kinds instead of one. 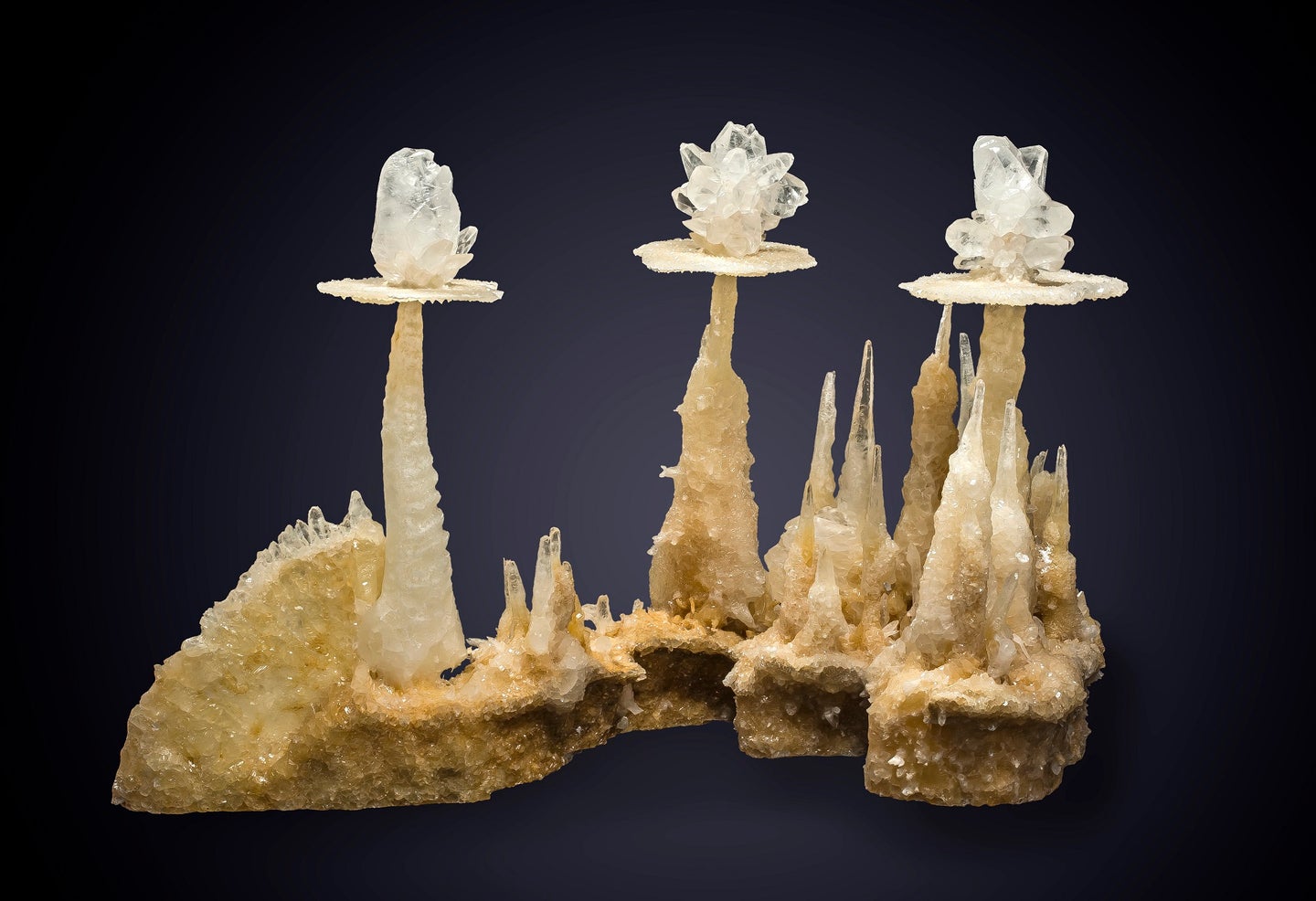 Calcite is known to form in at least 17 different ways, making it one of the most diverse mineral species (along with pyrite). This other-worldly example appears to be a cave deposit capturing different episodes of crystallization that correlate to changing water levels in southern China, during the ice ages. ARKENSTONE/Rob Lavinsky
SHARE

Robert Hazen was attending a Christmas party, one December night in 2006, when a biologist friend and colleague asked a simple question: “Were there any clay minerals in the Hadean?”

The question came from an important place. The Hadean eon is what scientists call the first chapter of Earth’s history—the fiery and mythopoetic time from our planet’s formation until about 4 billion years ago. And clay minerals, often found today in soils around the world, play a key role in some of the many theories of how life began.

But according to Hazen, a mineralogist at the Carnegie Institution for Science in Washington, D.C., it wasn’t a question his field was equipped to study a decade or two ago.

[Related: How minerals and rocks reflect rainbows, glow in the dark, and otherwise blow your mind]

He now hopes that will change, thanks to a new mineral cataloging system that takes into account how—and when—a mineral formed. It’s described in two papers, published today in the journal American Mineralogist. (This research could well be the vanguard for more than 70 other studies.)

“I think this gives us the opportunity to answer almost unlimited questions,” says Shaunna Morrison, a geoscientist at the Carnegie Institution and one of the papers’ authors.

Traditionally, mineralogists classify crystalline compounds by way of their chemical makeup (what atoms are in a mineral?) and their structure (if you zoomed in, how would you see those atoms arranged?).

“The way mineralogists think about their field is: Each mineral is an idealized chemical composition and crystal structure,” says Hazen, also one of the paper authors. “That’s how we define ‘mineral species.’”

The International Mineralogical Association (IMA), the world congress for the field of study, defines around 5,800 listed species: from pyrite and diamond to hydroxyapophyllite-(K) and ferro-ferri-fluoro-leakeite. It’s a collection that scientists have assembled over centuries.

That schema is great for identifying minerals on their face, but it doesn’t say much about how a geological artifact might have formed. Pyrite, for instance, can be traced back to anything from hot water and volcanoes to meteorites and human-created mine fires. Without that extra bit of knowledge, if you find pyrite, you won’t know the story it’s trying to tell you. Other minerals are borne in the extreme conditions of a lightning strike, or from Earth’s life directly, like in bones or bird poop. There are minerals that arise due to the oxygen that early bacteria pumped into Earth’s ancient atmosphere.

Hazen and Morrison wanted to create a next-level catalog that tied materials to their histories. “What we were really looking to do was bring in context,” says Morrison.

Currently, there are quite a few ways researchers can tell where, when, and how a mineral formed. They might look at trace elements, which are extra bits of chemical and biological matter that are incorporated into a mineral from its surroundings. They might look at the ratio of different radioactive isotopes in a mineral which, similar to carbon-dating, could tell scientists how far back a mineral goes. They might even think about a mineral’s texture or color; samples that have oxidized or rusted, for instance, might change appearance.

Equipped with data science methods—often used today by biologists to analyze genomes and by sociologists to find groups of people in a social network—Morrison was able to correlate multiple of those factors and find the formation histories for various minerals. It took her team 15 years to scour housands of minerals from around the planet and tag them with one of 57 different formation environments, ranging from spaceborne minerals that predated the Earth to minerals formed in human mines.

Now, they’ve transformed the IMA’s 5,800 species into more than 10,500 of what Morrison and Hazen call “mineral kinds.” One mineral can have numerous kinds if it formed in several different ways.

Take diamond, for instance. Chemically, it’s one of the simplest minerals, made entirely of carbon atoms arranged in a cube-based structure. But the new catalog lists nine different kinds of it: diamond that was baked and pressed in Earth’s mantle, diamond that precipitated from a meteor strike, diamond from carbon-rich stars before life even existed, and more.

In Morrison and Hazen’s revamped guide, around five-sixths of the IMA’s minerals came in only one or two kinds. But nine minerals actually branched off into 15 kinds. And no mineral in the catalogue has quite as many kinds as pyrite: 21.

In creating this schema, Hazen and Morrison (both of who are also on the Curiosity Mars rover team) are looking far beyond Earth. If you find a mineral on another world and you know where it formed, you can quickly figure out what sort of environment that planet held in ancient times. For instance, if your mineral is amongst the 80 percent of kinds that originated in contact with water, then you might have evidence of a long-dead ocean.

And if your mineral is amongst the one-third of mineral kinds that emerged from biological processes, it could be a hint of long-disappeared extraterrestrial life.

“A new way of seeing minerals appears,” said Patrick Cordier, a mineralogist at the University of Lille in France, in a statement. “Minerals become witnesses, markers of the long history of matter.”

“You can hold a mineral that’s hundreds of millions or billions of years [old]. You can hold a meteorite that’s 4.567 billion years old,” says Hazen. “There’s no other tangible evidence of the earliest history of our solar system.”