The jetpack dream is moving forward–or perhaps upward–once again. Martin Aircraft, makers of the Martin Jetpack (a PopSci Best of... 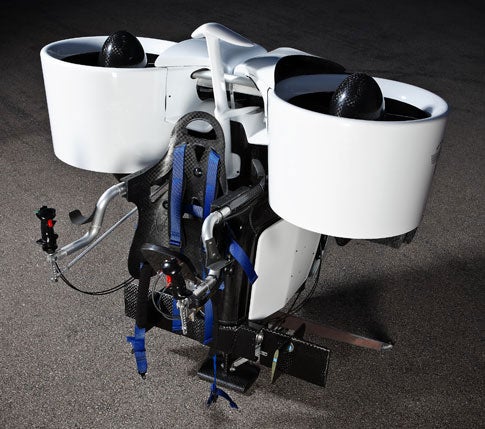 The jetpack dream is moving forward–or perhaps upward–once again. Martin Aircraft, makers of the Martin Jetpack (a PopSci Best of What’s New winner in 2008), have set a new flight duration record with their personal flight device, putting it in the air for seven solid minutes during a recent outdoor test.

This particular test was unmanned (that’s Jetson, a dummy/counterweight, that you see up there), though we’ve already seen the jetpack take a real pilot upwards at Oshkosh back in 2008. But that was a short and highly controlled hover. To be honest, that flight was pretty conservative, though the idea at the time was only to prove the concept publicly. The flight in the video below, controlled by a pilot on the ground, is the real deal, showing that the jetpack can sustain flight over a period of minutes. With this success, surely longer-duration flights are in the offing.

The term jetpack, of course, is a bit of a misnomer. The vehicle relies on two huge ducted fans (you can see them bending the grass over in the video) to provide lift. The company claims the current model can hoist a 250 pound person aloft for half an hour, long enough to make a short journey moving at a max speed of 60 miles per hour. Eventually, anyhow.

But one step at a time. For now, Martin is putting its jetpack through hover and endurance tests like the one you see here. If all goes well, you might be able to buy one relatively soon, assuming you have $100,000 to invest and the stones to be an early adopter.