What We Saw at the World Science Festival: Quantum Levitation

An unearthly demonstration of the eternal feud between superconductivity and magnetism 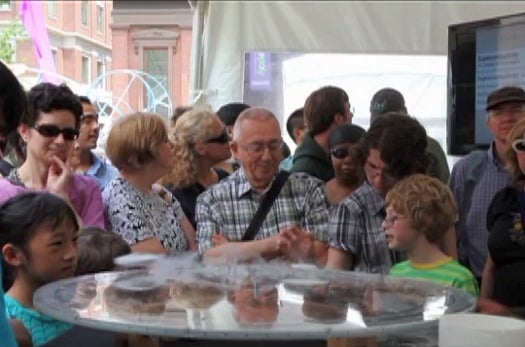 Enthusiastic crowds jostled to get a better view of the quantum levitation display at Innovation Square on Saturday, a day-long celebration of science held at MetroTech Plaza in Brooklyn as part of the World Science Festival. Run by Boaz Almog, an inventor and physicist at Tel Aviv University, it was the first public demonstration of its kind in the U.S. and by far one of the most popular events at the Square. Almog carefully dunked puck-sized discs into jars of liquid nitrogen and allowed onlookers to nudge them into hovering orbits. To the touch, the disc felt like a rough piece of ice.

The principle behind quantum levitation is called the Meissner effect: a material will expel magnetic fields from its interior if it becomes a superconductor. Almog takes advantage of this effect by coating ultra-thin sapphire wafers with yttrium barium copper oxide, a material that becomes superconductive when cooled to -301°F (thus the liquid nitrogen dunk tanks). He then places the cooled discs over a magnet, allowing everyone to see just how deep the animosity between superconductors and magnetic fields runs. The discs do a valiant job of expelling most of the field, though tiny gaps in the coating allow some magnetism to seep in. These leaks act like pins, trapping the disc about an inch above the surface, hovering until it warms up enough to lose its superconductivity. The disc hovers at a standstill or, if lightly pushed, will assume a circular orbit, liquid nitrogen trailing it like tail of a comet.

As shown in the video, the disc will be trapped whether it’s above or below the magnet. Beyond the science fiction aesthetic of the display, Almog expects quantum levitation to have many practical consequences, such as levitating trains and more efficient communication systems. And, we hope, hoverboards.