How Does The FBI Catch People Who Shine Lasers At Airplanes? 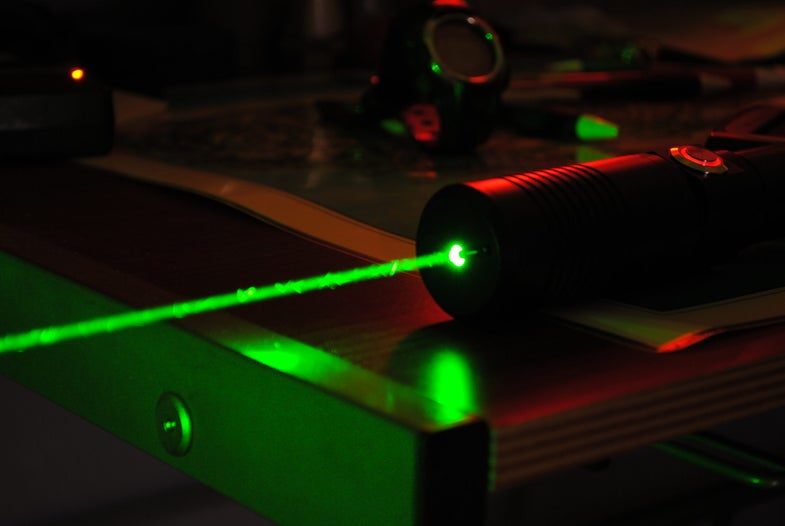 Aircraft lasing — directing a laser or another bright light at a moving aircraft — is becoming a huge problem, and authorities on the subject are worried that a growing number of reports will eventually lead to a serious incident.

At least 43 incidents were reported in the last two days; a huge spike and potentially the largest volume since the authorities began keeping records over a decade ago.

Special agent Celeste Danzi, a spokesperson for the Newark office of the Federal Bureau of Investigation, says the office is working with law enforcement partners to track the incidents. While this isn’t the first incident, the numbers for this week are some of the highest on record.

“We’ve had some past laser incidents,” says Danzi. “These laser strikes can imperil the aircraft, because it can disorient the pilot on takeoff or landing. They can be temporarily blinded. It’s like being in a dark car and then having a flash bulb go off,” she says. “It’s extremely dangerous, it’s a federal crime, and we take it seriously.”

Danzi said they weren’t commenting on methods, but the truth of the matter is that law enforcement only has so many options to catch the perpetrators.

Patrick Murphy, an independent expert on the topic who runs LaserPointerSafety.com, says that in most cases, planes are not able to identify the origin of the laser. “The only real way to find them is if a helicopter is hit–usually it’s a police helicopter–and it can hover there and call in officers. If an airplane is hit–fixed wing–it is very, very hard to identify where it came from.”

Murphy worked on the issue professionally in the ‘90s when laser light shows were first reported to interfere with aircrafts. He started his site in 2008 to inform the general public. “Unfortunately it’s been entirely unsuccessful, in that these things keep increasing and the word has just not gotten out.”

Murphy also thinks that people don’t understand why it’s so dangerous. “[There are] people that genuinely feel it’s not really a hazard. [They say] ‘Oh I’m hitting the bottom of the plane. It’s a tiny dot on the plane like when I’m playing with my cat.” They may legitimately think ‘Oh the light stops somehow magically after 300 to 400 feet and it really isn’t going to reach the plane.’ They’re wrong.”

Authorities used this method in Brooklyn earlier this year when a similar problem plagued La Guardia airport. Police followed the beam to an exact location and helped direct patrol cars to the address.

Still, the problem grows. In the past couple of years, there have been just under 4,000 events reported each year, and Murphy estimates this year the number may be somewhere between 5,600 and 7,400. And the only favorable something is better public education and awareness.

Banning the use of high-power lasers may not be a viable solution. It’s important to note that these aren’t always the heavy-duty, balloon-popping lasers you see in videos, Murphy says. “Even a standard laser pointer, around five milliwatts used for presentations is bright enough to distract a pilot. If a helicopter is flying low enough, it can also cause glare.” There isn’t much data to go on, but Murphy thinks the activity is likely split evenly between low and high powered lasers.

Currently, anyone can own any laser of any power. Murphy thinks the very coverage of the issue may be contributing to the sudden increase. “The only thing I can possibly think of is perhaps the increased publicity about some of the prosecution causes a copycat effect,” says Murphy.

Murphy says the word needs to get out that this sort of activity at the wrong moment can cause pilots to lose control, and cause hundreds of deaths. “It’s just like drunk driving. At some point hopefully society will say lasing aircraft is equally stupid, and hopefully we will come down on that.”

The penalties are certainly angling to do just that. As the FAA and law enforcement coordinate efforts to curb the practice, fines in the range of tens of thousands of dollars, and years of jail time have already been handed down to offenders for lasing aircraft–if and when they’re caught.