With European prestige-car makers scrambling to respond to the unexpected and disruptive arrival of electric-car company Tesla Motors, a host... 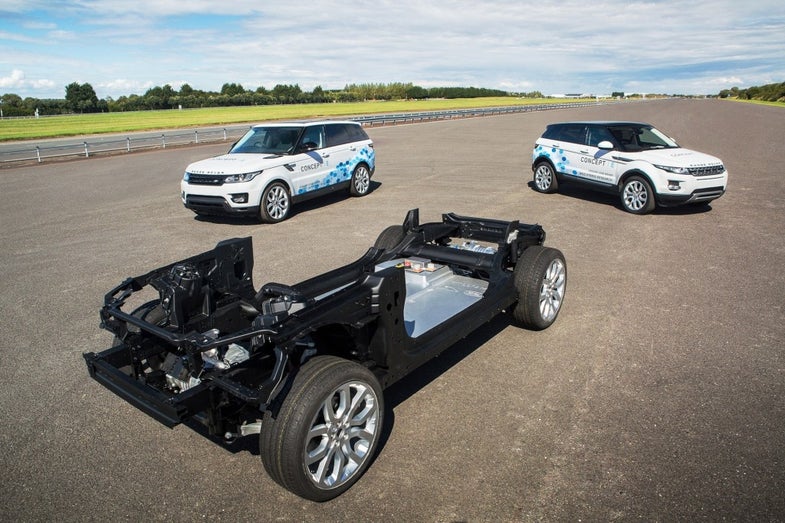 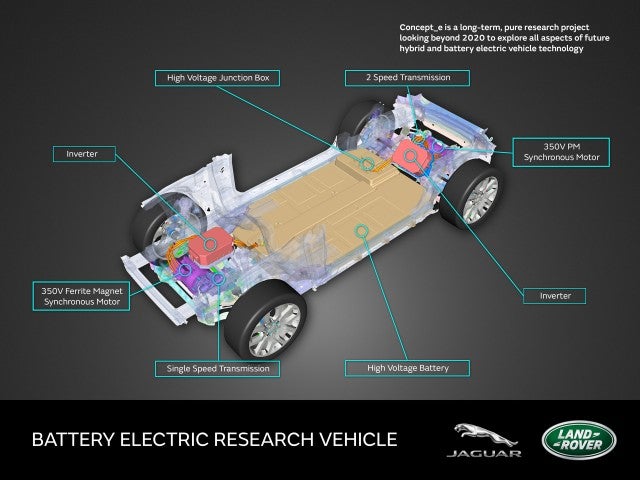 With European prestige-car makers scrambling to respond to the unexpected and disruptive arrival of electric-car company Tesla Motors, a host of luxury car brands have been showing off their electric concepts.

The coming Frankfurt Motor Show will see design studies by Audi and Porsche, possibly others, that point toward future all-electric vehicles with ranges of 250 miles or more.

And British maker Jaguar Land Rover is determined to keep up with its higher-volume German competitors.

So the company–which sells both Jaguar sport sedans and much higher-volume luxury SUVs under both the Land Rover and Range Rover brands–has revealed significant details of its own electrified technologies.

It’s clear that JLR plans to embrace electric-drive and plug-in technology whole-heartedly, while giving a miss to the hydrogen fuel-cell powertrains promoted by Toyota, Honda, and other makers. 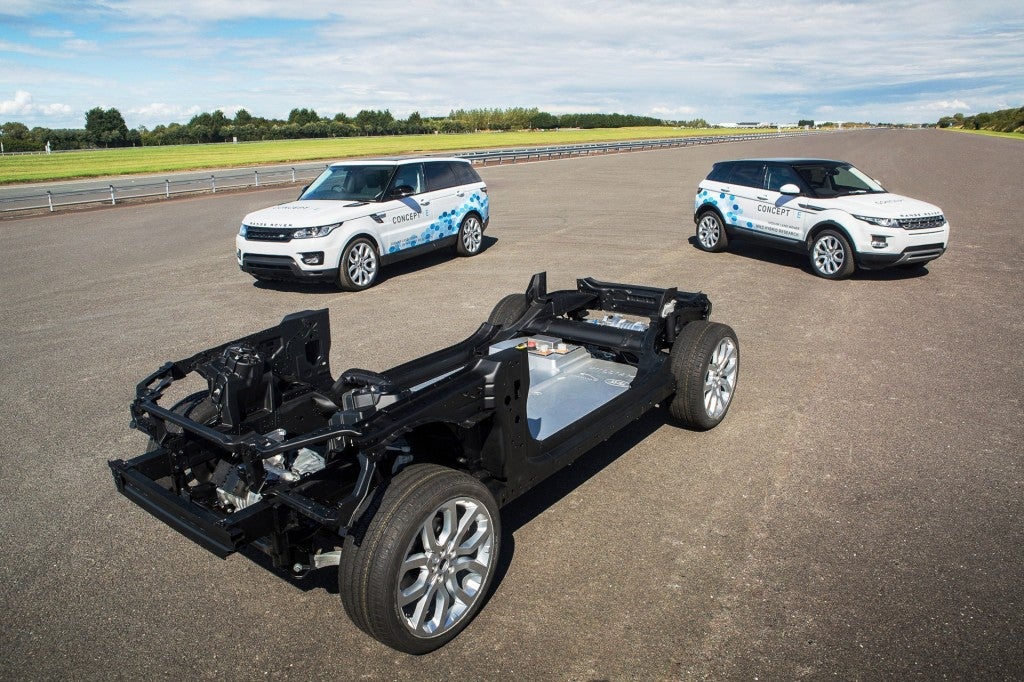 The company neatly pre-empted German rivals by announcing details of three different platforms that point the way toward technologies JLR believes will keep it competitive in an environment of lower carbon-emission limits and more stringent fuel-economy rules in markets around the world.

And it did so just before the Frankfurt Motor Show where Audi, Porsche, and others are expected to reveal concepts for their future electric luxury vehicles.

“The three Concept_e vehicles will allow us to test and develop exciting new potential technologies that could form part of our low and zero emissions vision beyond 2020.” 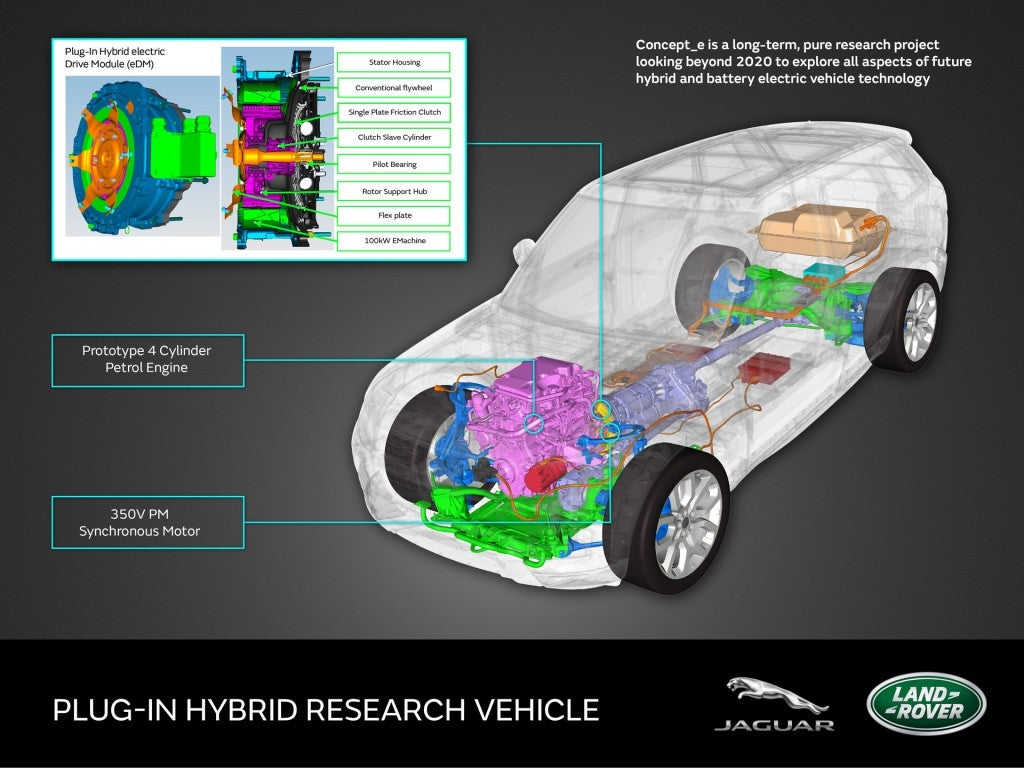 Briefly, the three concepts span the gamut from minimal electrification to full battery-electric power. They are:

Concept_e MHEV: A mild-hybrid system comprising an electric motor-generator that converts wasted brake energy to electricity that can be stored in a battery and later reused to power ancillary features: a starter motor, air conditioner, or other electric accessories. The Concept_e MHEV system consists of a hybrid module sandwiched between the transmission and internal combustion engine, in this case a downsized diesel unit, of a Range Rover Evoque.

Concept_e PHEV: This plug-in hybrid concept pairs a gasoline engine with a larger, more powerful electric motor. In this case, the motor–still sandwiched between the engine and transmission–can power the wheels, either by itself for short distances or together with the engine. The Range Rover Sport used to show off this system houses its lithium-ion battery under the load bay.

Concept_e BEV: This all-electric powertrain has been designed to fit Jaguar Land Rover’s lightweight aluminum platform, which underpins its latest vehicles, including the Range Rover and the Jaguar XF and XE. The Concept_e BEV uses a 70-kilowatt-hour lithium-ion battery pack, located in the vehicle floor, to power one electric motor on each axle–a similar setup to the Tesla “D” all-wheel drive system offered in the Model S and standard in the Model X.

JLR also discussed future technologies for reducing the energy consumed by heating and air-conditioning system, which can consume 20 percent of the fuel used in internal-combustion vehicles, and as much as 40 percent of the battery energy used in an all-electric vehicle.

Those range from simply recirculating heated air to small infrared panels that produce the sensation of warmth in passengers while requiring far less energy than heating all the cabin air to a given temperature.

Weight reduction also gets its due, with the company’s new aluminum architecture supplemented by experiments in carbon-fiber and polymer structures.

Finally, the weight of a traditional wiring harness–with copper wires–could be reduced with printed electronic circuits to carry electricity around the car for lower-power components like instruments and switches, JLR says.