#TBT to 1947: Introducing the Polaroid Camera

And other vintage photo news from Popular Science's May 1947 issue. 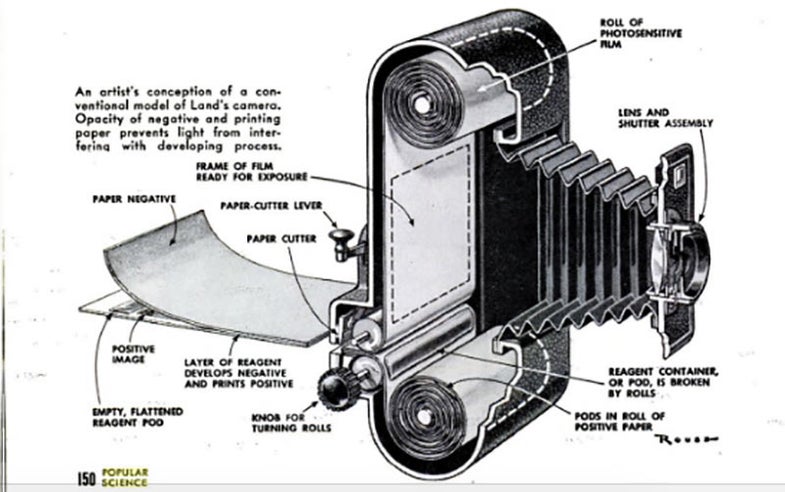 Today we’re taking you way back to 1947 for some photographic wisdom from our friend’s at Popular Science.

The world meets the Polaroid:

Edwin H. Land unveiled the world’s first instant camera in 1947, which he called the Land camera. The camera spit out black-and-white prints in 60 seconds. What’s more: light was not required for printing. Here’s what Popular Science had to say about it:

“The Land camera takes its pictures in the conventional way, but inside it, in addition to the film roll, there is a roll of positive paper with a pod of developing chemicals at the top of each frame. Turning the knob forces the exposed negative and the paper together through rollers, breaking the pod and spreading the reagents evenly between the two layers as they emerge from the rear of the camera. Clipped off, they can be peeled apart a minute later.”

The darkroom for the photographer short on space:

A product that New York City apartment dwellers of today would certainly appreciate—Walter O. Englund’s Darkroom in a Box was a plywood cabinet that measured 19 inches x 26 inches x 33 inches. It had an allocated slot for every chemical and piece of equipment needed to develop prints. Think of it as a predecessor to the storage solutions found at The Container Store.

“Open the front doors, and this is what you see. The compartment at the right will take 11 x 14 trays if the bottom shelf is removed. On the right door are hooks for film clips and a print roller, In the right end are four drawers for storage of paper.”

I can think of a few film enthusiasts that would benefit from a product like this today.

Plain white backgrounds are boring. Add some drama to a simple portrait by casting shadows with a homemade “cookie” (not the kind that you eat, but one that you use for casting shadows or silhouettes to produce patterned illumination). This DIY project is simple: all you need a lighting source, some black paper or thin cardboard, and scissors.

“For pattern ideas, you need only study everyday objects. A brick wall, a flagstone walk, foliage, a picket fence, the rays of a the sun, wagon wheels, latticed windows—all suggest good designs. Precision is not necessary in cutting (a razor blade may be used as well as scissors) for the shadows will be fuzzy anyway when cast on the wall. This fuzziness, however, adds to rather than detracts from the pictorial effect.”

Once you have your pattern cut, suspend it in front of your light source at approximately a 45-degree angle so that you subject can pose in front of it. Finally, make sure to keep the lighting on the background dim, as not to blow out the shadow pattern on the wall.