How Technology Will Make Everyone A Great Photographer

Just not quite yet. 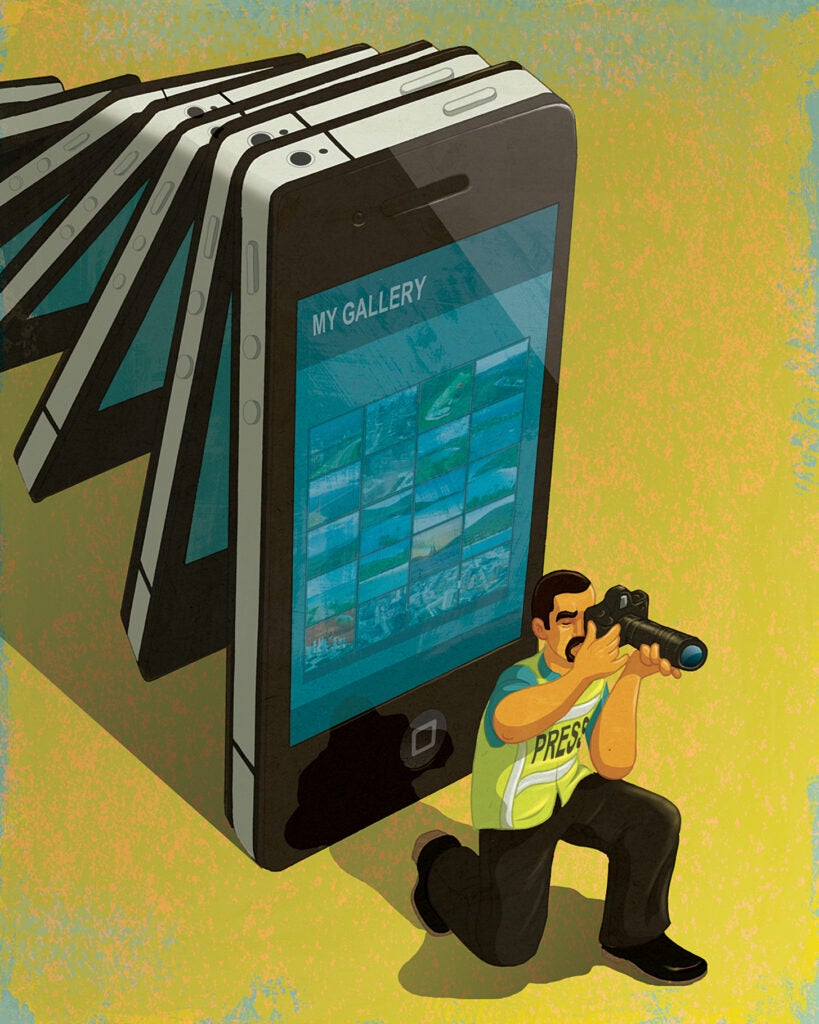 At the end of May, the Chicago Sun-Times laid off all its staff photographers. The paper would instead use newswires, freelancers, and reporters armed with iPhones. It was not the first time traditional media turned to untrained photojournalists—consider the Instagram photos NBC published after the Boston Marathon bombing or CNN’s iReport—but it was the first time any outlet made a policy of doing so.

As one might expect, the Sun-Times‘ decision has met with criticism. It’s been called “shortsighted” and “idiotic.” There’s even a Tumblr of head-to-head comparisons between the Sun-Times and the still-photo-staffed Chicago Tribune. But the change does have its logic. First, it’s cheap. And, in theory, it will give the Sun-Times even more reach, by leveraging the cameras already in place at news events.

For the strategy to pay off, however, cameraphone technology needs to support it in ways it currently doesn’t. Cameraphones have improved dramatically in the last few years—the Nokia PureView sensor has 41 megapixels, and HTC’s newest sensor has larger pixels that grab more light—but they still suffer from one great shortfall: inadequate lenses.

About a year ago, engineers began to address the issue by putting cellular radios inside cameras, rather than attempting to cram cameras inside phones. The 16.3-megapixel Samsung Galaxy Camera has a 4G radio and a 21-times zoom lens. And the newer 20.3-megapixel Galaxy NX has an interchangeable lens mount. The Sony QX100, the newest offering in the lot, is the most extreme example. The device is just a lens, sensor, and image processor, and users attach their smartphone as a viewfinder.

Editors will need software that selects the best images—not just the ones from the right place at the right time. Connected cameras may improve the overall quality of crowdsourced images, but they will do little for the editors whose job it is to sort through them. Current services provide a temporary solution. With Scoopshot, a Helsinki software start-up, publishers can send photo assignments to the service’s network of 300,000-plus mobile users. Stringwire, which NBC acquired in August, lets video producers request an uplink from anyone who has tweeted near an event of interest. But to assure quality, editors will need software that automatically selects the best images—not just the ones taken in the right place at the right time. That type of computer vision already exists on a small scale. A recent update to Google+ analyzes groups of pictures for blurriness, aesthetics, landmarks, and exposure to pick out the most shareable ones. The Sun-Times to benefit from that type of machine vision, the software will need to process larger image batches from multiple sources. In time, those pieces may come together, proving that the Sun-Times decision wasn’t foolish—it was just a bit before its time.