Vizio’s New TV Is Controlled Entirely By An App 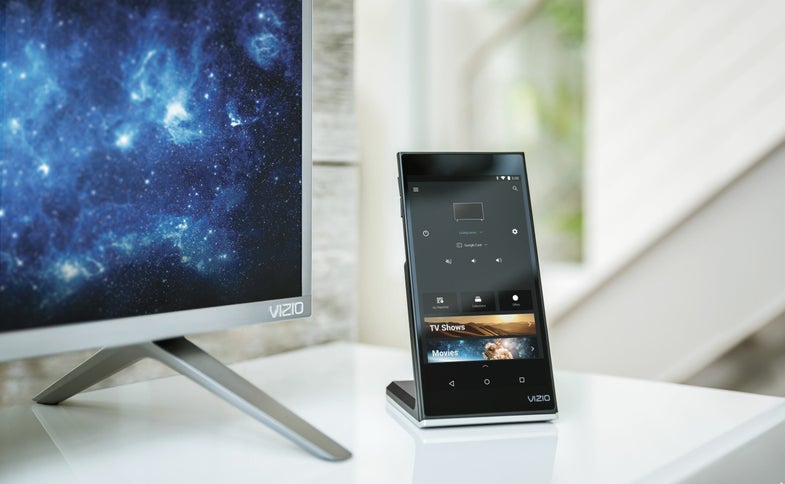 There are a lot of products that push technology for technology’s sake: smart floss dispensers, smart plates, smart water bottles.

But the television has lagged behind in terms of meaningful innovation. Of course, screen resolution has gotten better, and TV sets are thinner than they’ve ever been. But the way we control our TVs and consume content through them haven’t changed since the invention of the remote control.

With its new P-Series televisions, Vizio is pushing the industry towards a welcome eventuality: a world without TV remotes.

The company’s new line of televisions comes with a speciality Android tablet that acts as the TV’s remote, yet it also has an app available on the Google Play Store or Apple’s App Store. So any Apple or Android smartphone or tablet can be a fully-functional remote as well.

While the TV does come with an extremely pared-down remote, it can really only accomplish the most basic functions. Vizio has made it clear that the smartphone or tablet is the way we should control TVs from now on.

The Vizio SmartCast app pulls in data from all of the online or cable services to automatically show sources for what you want to watch.

To do this, Vizio worked with Google to center the entire TV-watching experience around content, not content providers. You choose what you watch on your phone, and then send it to the TV. Flipping channels? Phone. Choosing a movie on Netflix? Phone, and everyone in the room can have a say if they have the app.

It’s more than a Chromecast-enabled TV, in that the dedicated app can control all settings of the television. Also, the SmartCast app congregates all your services in one place.

But the experience doesn’t end when you choose something to watch. Vizio wants the second screen to be important throughout the experience. The included tablet is a nod to how people are watching TV in 2016. We’re on Twitter, or Facebook. We’re looking things up about our favorite characters. We’re sending messages about what we’re watching.

The included tablet is an insurance policy— if you’re buying this high-end television you probably already have a smartphone, but Vizio is going to let you indulge in a second-screen experience no matter what. And if you don’t need it, hand it off to someone else in the house to watch Netflix on, and use your phone as the remote. The tablet checks all the boxes for a modern device: 1080p screen, V8 octacore processor, and Android Lollipop. It also charges wirelessly, and comes with a charging stand.

There’s also another benefit for this app-centric TV control. Since everything runs off the Google Play Store or App Store, users will always have the most up-to-date apps, rather than Android TV or Apple TV apps that might lag behind in the development process. This also means that Vizio can push updates quickly, and through established update channels.

Besides this new idea of how we should interact with them, the P-Series TVs are standard high-end machines. They’re 4K monitors with gorgeous HDR capability, and proprietary algorithms that determine screen brightness within zones to maintain dark, deep black color.

The P-Series starts at $999 for a 50-inch TV with included Android tablet, and is available today.