Just getting into photography? Great! When you're looking for a camera, keep on walking past those DSLRs--as of now, their moment is over. 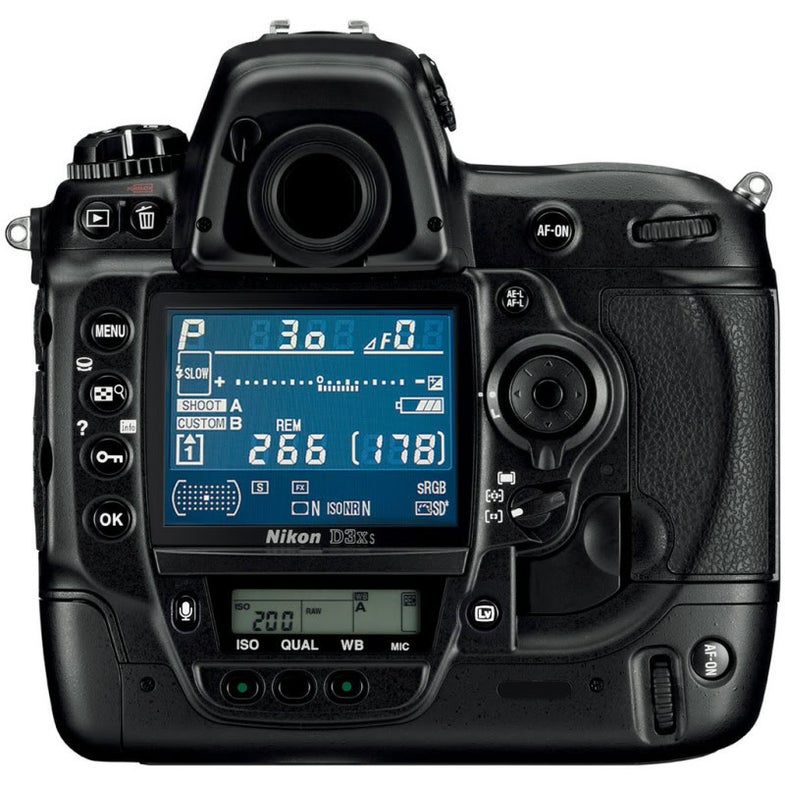 You want to get more into photography. You’ve got somewhere between a few and several hundred dollars to spend on a camera. You want to learn a little bit about how this stuff works, so you can tweak some settings to get better shots, but mostly you just want your pictures to look good. You want a nice background blur. You want sharp focus, accurate colors. You want shots taken in low light to have a minimum of noise and blur. Great! This is exciting for you.

Photokina 2012, going on this week, might be the moment when the DSLR loses its ascendancy among aspiring amateurs. Two years ago, DSLR was the obvious best option. Alternatives (which I’ll get into) were in their infancy, still too expensive and too limited to really recommend, and entry-level DSLRs were starting to get really good, so if you wanted to jump into photography, you bought a DSLR. That’s what everyone’s always said (well, “always” meaning in the digital age). Want to get into photography? DSLR. But that’s no longer true. DSLRs have serious weaknesses for the entry-level photographer, and suddenly there are options without those weaknesses.

Photokina this year has been, in large part, about making tiny, easy-to-use cameras with startlingly good image quality. Here’s what you should buy instead of a bulky, difficult DSLR.

The ILC needs a decent name, and quick, because for a category that’s so well-suited for so many mainstream photographers, it has a name that’s simultaneously arcane and vague, intimidating and uninformative. ILCs, also called mirrorless cameras, consist of a very thin, very small body, the size of a medium-sized point-and-shoot. But they have sensors bigger than any point-and-shoot, and tons of advanced options, and if you want, you can swap out lenses (hence, “interchangeable lens”). Here’s what’s important about them: they’re only marginally bigger and more complicated to use than point-and-shoots, and they take photos in the same league as entry-level DSLRs.

Normal folks don’t carry around two pounds of misshapen camera with them. A slim, 350-gram camera like the Sony NEX-6 slips into a jacket pocket or purse–or, if you don’t wear especially tight pants, into a pocket. And the NEX’s lens is tiny, a little 30-mm pancake lens, meaning this is one of the first ILCs that will in fact slip into a pocket.

Another great advantage to ILCs that often gets overlooked is that their navigation is informed much more by point-and-shoots than by DSLRs. The Sony NEX-C3, an interchangeable-lens camera, has a clickwheel, shutter, movie button, play button, and two context-sensitive buttons. That’s it. It looks pretty much like the crappy point-and-shoots everyone’s used to. 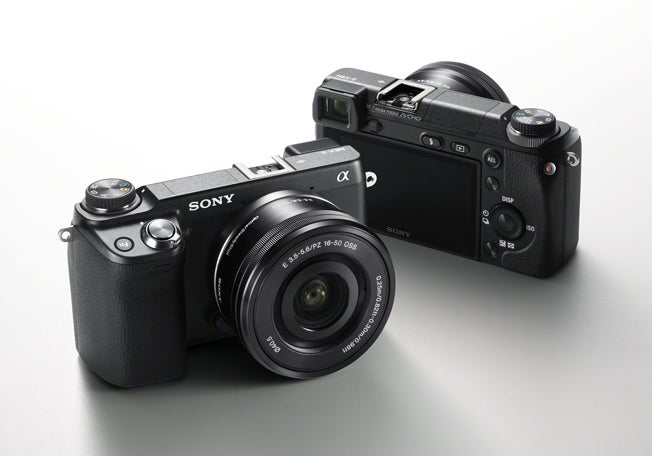 The argument every photographer will make is, well, DSLRs are laid out that way for a reason–for speed when you need to change settings on the fly. But you know who doesn’t need to save two seconds while adjusting the auto-exposure lock? Pretty much everybody. The NEX series, one of the best in the ILC category, has a menu system that’s “pretty similar” in featureset to Sony’s Alpha DSLR series, says Pop Photo’s Stan Horaczek, a definite pro and DSLR user himself. “Though,” he said, “it can seem easier for a novice to navigate ILC menus because there are fewer buttons and knobs all over the place.” And that’s great, because by removing the camera as a technical object to be mastered, budding photographers can focus on what’s arguably more important–the photo itself, and skills like composition and timing. Many of these cameras, like the Olympus Pen Mini, have modes to help you do just that.

But the most important thing? The images you can take with these cameras are amazing. I’ve completely switched from my big ol’ Nikon to a combination of the Olympus PEN E-PM1 and miscellaneous Sony NEXes, which are half the size, as little as half the cost (in the case of the Olympus), and do very, very few things worse. They do everything I need, and I’m so much more excited to use a tiny sleek camera than my old DSLR. It’s a flat-out more pleasant experience. 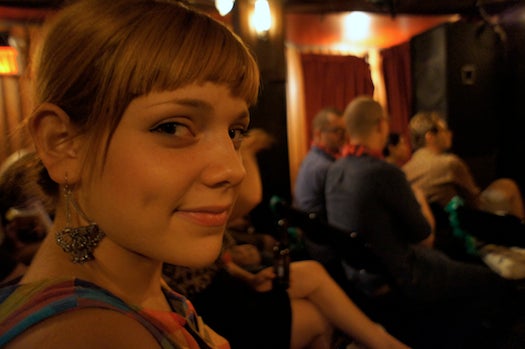 An ILC in Low Light

I took this shot of my friend Mollie while in a dark, low-ceilinged basement comedy venue, with a Sony NEX-C3. I might have been holding a large plastic coconut filled with alcohol in my other hand. And it turned out great!

ILCs have tradeoffs, of course. DSLRs have a dedicated sensor for autofocus, one completely separate from the sensor used to take a picture. ILCs are too small for that, so they use the same sensor. That means autofocus is slower. The sensor in an ILC is a bit smaller, which limits the amount of light it takes in, which in turn means worse performance in low light. The lenses are more expensive and fewer in number. There’s often no electronic viewfinder, so you have to use the live-view screen, like you would with a phone or lesser point-and-shoot, which can be hard to see in sunlight and may make it hard to keep the camera steady.

That’s all true, and every photographer will go on at length about it, but here’s the thing: it doesn’t really matter. Because ILCs are small, attractive, increasingly inexpensive, and take great pictures. They offer manual control when you want it and simplicity when you need it. That’s what matters.

You can even go down a step from the ILCs to, well, non-interchangeable-lens cameras, a category name somehow even more cumbersome than the ILC. (Some folks are calling them “advanced compacts.”) Essentially, these are tricked-out point-and-shoots. The big boys in the category are the Canon S100-series (the S110 will come out soon) and the Sony RX100. The S100 is a great point-and-shoot with tons of manual options that turns out great pics. The RX100 is, well, we’re not really sure what it is yet. It looks like a point-and-shoot, but it has a monster sensor for that category, and the test shots we’ve seen are astounding. And that’s the direction compacts are going. Stan quipped “Sensor size war is the new megapixel war,” and it’s a war we all want, because bigger sensors equals better photos (unlike megapixel count).

And that’s why, if you don’t really care about stocking up on multiple lenses, you might want to look to this category. Brian Lam, proprietor of the no-nonsense gadget-recommendation site The Wirecutter, says “Most people who buy entry-level DSLRs don’t get a second lens, typically. The RX100 is a great replacement for that.” If you have a DSLR and your only lens is the 18-55mm that came with it? You made the wrong call. 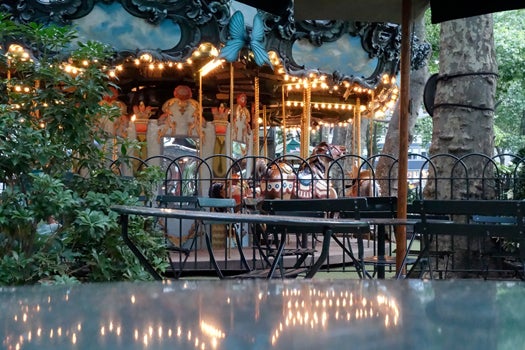 To really get a sense for how great this photo is–taken with a camera the size of a point-and-shoot–.

If you want a look at the future, check out the Sony RX1–kind of like the RX100, which is expensive at $650 but also a great option for lots of people, taken to an extreme. At $2,800 and with a non-interchangeable prime lens (meaning, no zoom at all), the RX1 is definitely not for the beginner; though we haven’t seen final image quality yet, Lam said, “The RX1 is right for someone who is a pro and wants a specific backup camera, or someone who makes over $250,000 a year.” But it’s a sign of things to come. It’s got a full-frame CMOS sensor, the same sensor as in giant DSLRs that cost thousands of dollars, and the image quality to match. And it fits in your pocket.

How do these exist? For advanced compacts, camera manufacturers can put in any kind of weird sensor size they want, since the camera doesn’t have to conform to a particular lens system. ILCs all have to work with the dozens, sometimes hundreds, of lenses in their lens system. But if you take away its ability to exchange lenses, the camera can have any size sensor at all, because you’re creating the lens system individually for this camera and nothing else. So make it huge! Make the lens awesome, since there’s only one! Then the photos are incredible, and what you’ve lost might not be something that many people need in the first place.

THE PROBLEMS OF THE DSLR

Size: DSLRs are enormous, problematically-shaped gadgets. There’s no other portable gadget with such an unapologetically non-portable shape–your phone, tablet, laptop, gaming console, ebook reader, those are all flat. Hell, even giant headphones fold up into themselves. But DSLRs are bulky, heavy, roundish and squareish at the same time. They do not fit in a pocket, purse, or neatly in a messenger bag. They don’t rest well against your back in a backpack. There’s a reason there’s a thriving economy of DSLR-specific bags.

I have a Nikon D5100, a low- to mid-range but quite nice DSLR. I love the photos I can take with it. And I never use it, because I never have it with me, because it is a giant lump of black buttons and screens and lenses. And the D5100 is small for a DSLR. But something like a Sony NEX? It fits comfortably anywhere. I take it with me everywhere. By downgrading my camera size, I’ve significantly upgraded the quality of my photos, because I actually use the nice fancy camera. 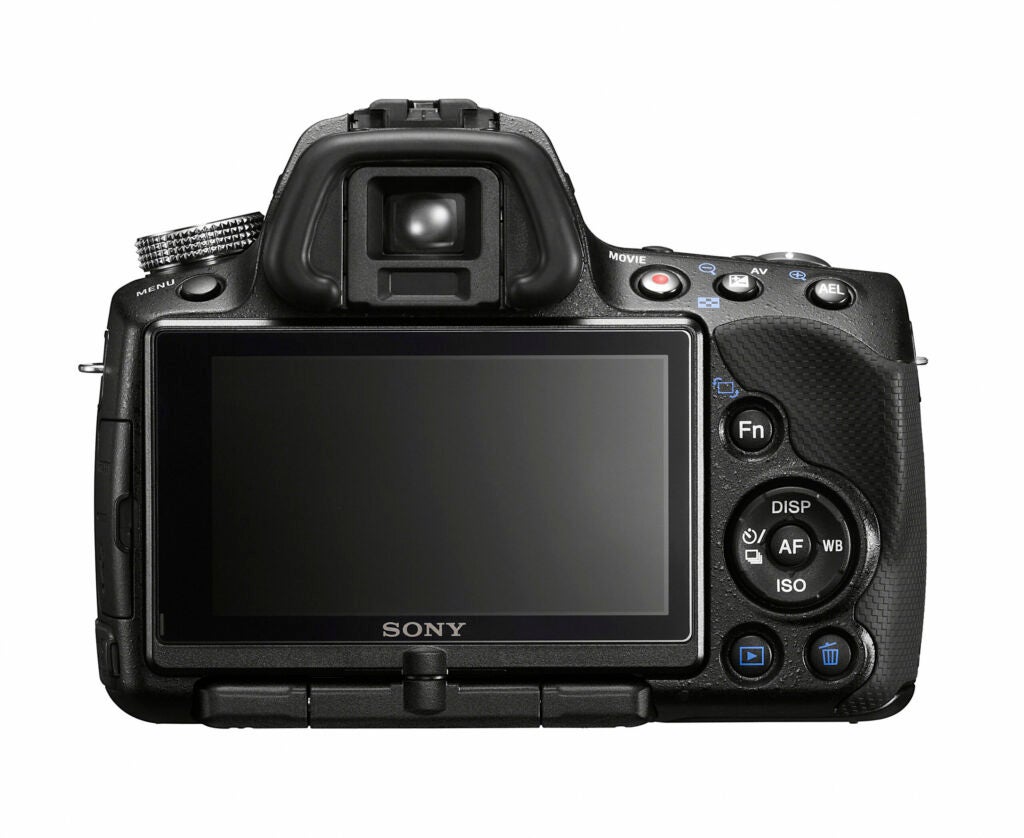 Approachability: Look at the back of this Sony A55 (above)–an excellent camera and winner of Pop Photo’s Camera of the Year award. You’ve got: a shutter with an on/off switch, a ring with nine options, an unlabeled click wheel, a five-way directional pad (with each direction doubling as a secondary function), and and array of buttons scattered around the body, including Menu, Finder/LCD, D-Range, Movie, AV, AEL, Fn, Play, Trash, and one tiny unlabeled black button underneath the lens. Are you exhausted? That is exhausting.

If you’re just getting into more serious photography, a DSLR’s button layout is a major obstacle to overcome, and, more importantly, an unnecessary one. It’s not that people can’t learn, or even that they shouldn’t–it’s just that for many users, there’s no need. To someone who’s only used a point-and-shoot, you know what a DSLR looks like? A * airplane cockpit. A simpler layout lets a novice learn at his or her own pace, adding skill and expertise, feature by feature, without that initial wall to climb. There’s no need for that type of user–which, it bears mentioning, we all were, once–to feel threatened. This isn’t school. This should be fun.

Commitment: Buying a point-and-shoot is easy; the decent ones are pretty similar. But buying a DSLR is more like buying a smartphone. You’re not just buying a camera, the same way you’re not just buying a phone. You’re buying into an ecosystem, where only certain accessories are available to you. Canon lenses don’t work with Nikon bodies. A case made for a T3i won’t fit a 5D Mark III. And like a smartphone, your first purchase is just that–the first of what is supposed to be many. You need apps for your phone, and you need lenses, different kinds of flash setups, bags, straps, tripods, microphones, and more for your DSLR. DSLRs are fantastically flexible, but they rely on modularity.

Someone who just wants to take their photography one more step, who may do it on impulse and not ever buy another lens, doesn’t need that flexibility. DSLRs should be, and will be very soon, for experts. For pros, or passionate amateurs. Sports photographers, bird-watchers, people who want to build a multi-thousand-dollar collection of lenses. But for those of us who just want to take better pictures, dammit, there are amazing options just for us.

* Editors’ note: We hear you, readers! Now excuse us while we go wash out our mouths with soap.