‘Oculus Face’ Is The Sign Of Our Virtual Times 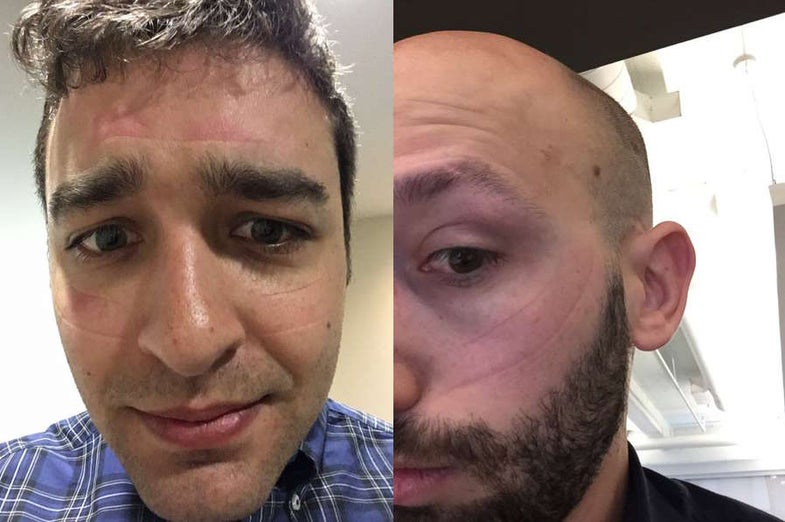 The Oculus Rift, Facebook’s $599 virtual reality headset, is now finally shipping out to buyers. While many are excited to get their hands on the final consumer version of the headset (including us at Popular Science), a few people who were lucky enough to get it early have reported a potentially embarrassing side effect: temporary red marks on their faces, a.k.a., “Oculus Face” or “Rift Rash.”

Check out these tweets from journalists who tried out the Oculus Rift, including my former colleague at The Verge, Ben Popper:

The marks appear to be caused by the pressure of the headset’s straps and rim, despite the fact that the rim is covered in foam padding. Oculus VR, the Facebook-owned company that makes the Rift, says on its website that the headset is designed to be “customizable, comfortable, adaptable, and beautiful.” I’m pretty sure they weren’t referencing the resulting red marks here.

That said, it’s still early days for the Oculus Rift and virtual reality headsets more generally. Very few individuals have access to one right now, so it remains to be seen how many people suffer this ultimately very minor and fleeting cosmetic issue in their own usage, let alone if VR headsets from other companies — such as the HTC Vive or Sony’s Playstation VR — have similar effects on wearers’ faces. But in a time when virtual reality is increasingly being hyped as the next great platform for gaming, entertainment, and even computing, it’s a good reminder that here in the real world, it can make you look a little silly.