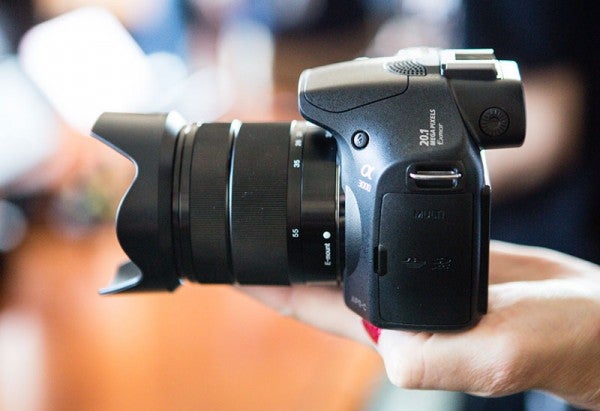 Sony makes great mirrorless cameras and great DSLRs; its NEX-6 mirrorless camera might be the best of its kind ever made, and the full-frame A99 DSLR blew our friends at Popular Photography away. The newly announced A3000 is something we haven’t seen before: a mirrorless camera in the shape of a DSLR. Best of both worlds, or a weird misfit in camera purgatory?

DSLRs use a mirror to reflect light into the viewfinder, so you can see the image right through the lens. That requires a fair bit of space, so DSLRs necessarily have a large body–which they fill up with all kinds of goodies, like a separate sensor for autofocus and mounts for big, expensive lenses. Mirrorless cameras don’t have the mirror; they tend to be very compact, but they have a few key weaknesses. The tiny size means autofocus is sometimes not quite as good as in DSLRs (though Sony has made huge strides in that department lately), there’s not much room for an electronic viewfinder (so you’re often restricted to using the screen to frame your shots, like on a cellphone), and they’re compatible only with the smaller, more expensive selection of lenses specifically designed for mirrorless cameras. (DSLRs have used the same lens mounts for decades, so if you’ve got a brand-new Nikon, you can screw on a lens from the 1960s with no problem.)

The A3000 is a mirrorless camera, but it’s bigger and thicker than Sony’s regular mirrorless line, the NEX series. In fact, it has the shape and color of a Sony DSLR, though it’s smaller than even the smallest Sony Alpha DSLR. (The Panasonic GH3 is similar, though much more expensive.) It has an electronic viewfinder, and the shape and button layout may be more comfortable or familiar to those who have used DSLRs in the past. But it uses the more expensive and limited selection of lenses meant for the NEX series, and it has a similar amount of processing power and quality of internals as the NEX-6–though they’re used differently. 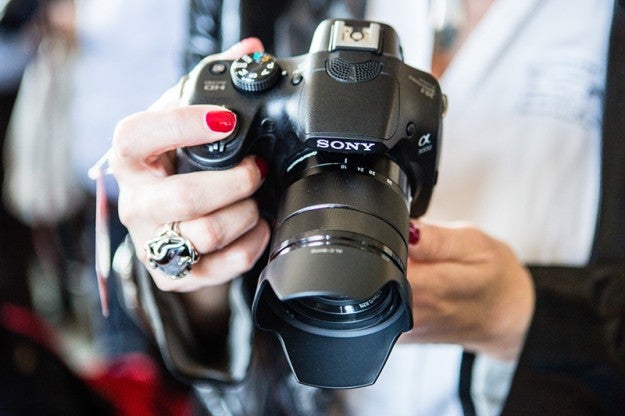 The A3000 has a 20-megapixel sensor, giving it a higher resolution than the NEX-6 (which has a 16.1-megapixel sensor), but the trick here is that the NEX-6 secretly has a higher megapixel count than it advertises. The extra megapixels are used for an autofocus system, similar to the way it’s done in DSLRs (which have historically been much better at autofocusing than mirrorless cameras). The A3000 has no such setup, so its autofocus abilities may not be quite as strong. But given the slightly improved processor, it’s likely that the A3000 will have similar image quality (meaning, very good image quality) as the NEX-6.

But the big difference: with a kit lens, the NEX-6 retails for $800. The A3000 will be half that, at only $400. That gives it a pretty amazing ratio of image quality to price; there are plenty of mirrorless cameras in the $400 range, but none have anywhere near the likely image quality and featureset. (That’s thanks to the A3000’s larger size, which makes it easier to fit in quality components.)

DSLRs, too, are much more expensive; a good entry-level DSLR, like the Canon T4i, also costs $800.

For an in-depth, expert look at the A3000, head on over to our sister site, Popular Photography. We’ll definitely be watching; it’s one of the more interesting cameras out there, and could be a great, cheap option for anyone looking for a first interchangeable-lens shooter.