Deployed off the coast of New Jersey earlier this week, the modified Wave Glider robot gathered realtime data from Sandy as the storm approached landfall Monday. 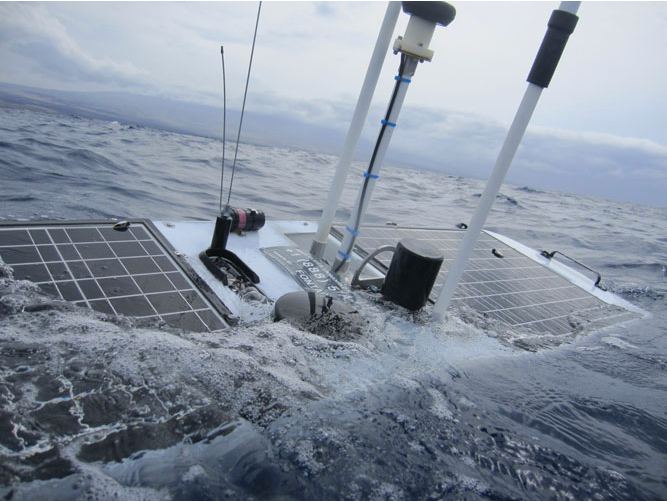 Back in August, as Tropical Storm Isaac was churning toward New Orleans, the National Oceanic and Atmospheric Administration experienced a near-miss. One of its prototype wave-powered Wave Glider robots–a proof of concept storm tracking ‘bot that NOAA plans to evolve into an entire fleet–was in the water north of Puerto Rico on a routine science mission when Isaac skirted by, just missing the robot and robbing NOAA of a great opportunity to give its robotic storm chaser a real-world trial. This week, NOAA got its second chance.

NOAA deployed a second Wave Glider named Mercury in the Atlantic earlier this week about 100 miles east of Tom’s River, N.J., just off the soon-to-be devastated Jersey Shore. Mercury met Hurricane Sandy head on, streaming back realtime data on the storm as it came charging inland on Monday. Most notably, Mercury recorded winds as high as 70 knots (80 miles per hour) and a plunge in barometric pressure of over 54.3 millibars, troughing at 946 millibars just as Sandy was making landfall.

NOAA plans to eventually field entire fleets of these self-propelled, wave-powered instrument platforms along with faster moving counterparts (made from modified EMILY robots) that can actually keep pace with a storm (the slower-moving Wave Gliders are meant to position themselves in front of a storm as it blows over). The data they collect will go a long way toward helping meteorologists improve their understanding of how different storms develop and the models they use to predict their paths and intensities–and hopefully save lives.