How jet fighters could halt hurricanes 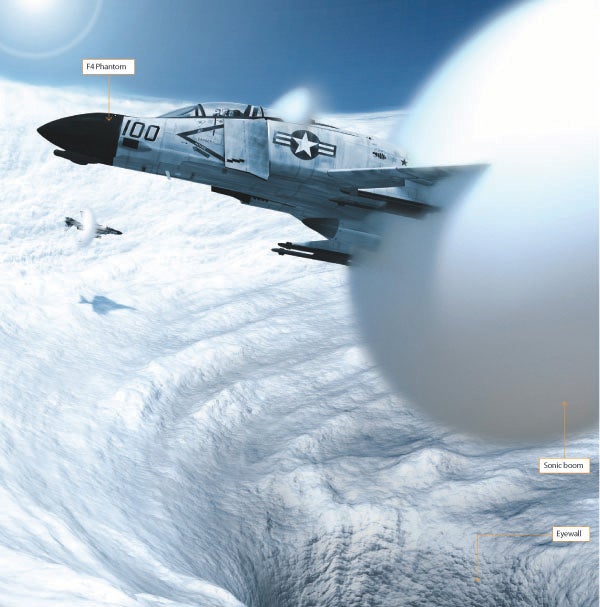 A Category 4 hurricane approaches New Orleans, yet “When the Saints Go Marching In” continues to spill out of clubs on Bourbon Street. No one’s worried, because two F4 Phantom fighter jets have just taken off from the nearby Naval Air Station Joint Reserve Base to kill the storm before it hits land.

Such is the idea drawn up by Arkady Leonov, a fluid-dynamics engineer at the University of Akron. According to his calculations, sending supersonic jets into the eye of a hurricane and circling them counter to its winds could slow the storm. Furthermore, flying the jets near the water could choke off the supply of warm air that fuels the storm. If the plan works, it would offer the first option for quenching hurricanes, which inflict $5.1 billion of damage every year in the U.S. alone.

As you might expect, some hurricane scientists are skeptical. Shock waves from a sonic boom would probably travel through the storm without slowing it, like trying to stop the wind with a tennis racket, says Hugh Willoughby, a hurricane researcher at Florida International University. He also thinks that the turbulence in the eyewall would rip apart a plane flying so fast. (Leonov contends that a jet traveling at more than 1,100 mph would have no trouble slicing through 100mph gusts but suggests that robot pilots could deal better with the 4-G forces exerted on the pilot during the maneuver.) Wen-Chau Lee, a scientist at the National Center for Atmospheric Research, points out that hurricanes, like earthquakes, are the planet’s way of releasing energy from one part of the world to another. “If you terminate or even diminish a hurricane, what would the Earth do with all that pent-up energy?” Lee says.

Finding out might be worth the risk. In 2005, hurricanes Katrina and Rita killed some 1,300 people, and 2008 saw a record number of consecutive storms hit the U.S. Leonov hopes to discuss his plan with Air Force officials later this year. “I’m not a pilot,” he says, “so maybe these guys can come up with an even better approach.”