A group of tiny crustaceans known as seed shrimp have an unusual distinction: They produce some of the longest sperm... 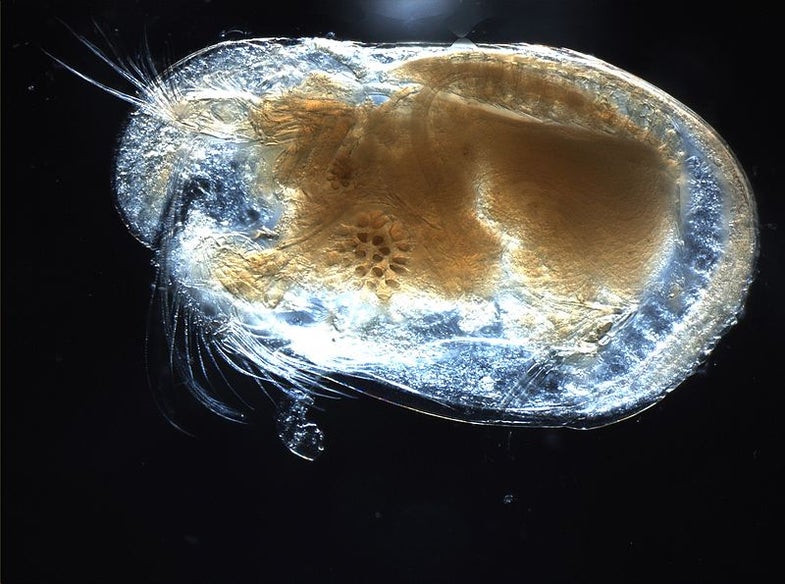 A group of tiny crustaceans known as seed shrimp have an unusual distinction: They produce some of the longest sperm cells in the animal kingdom. The sperm cells of some Cypridocopina ostracod species reach 10 millimeters in length — for comparison, a human sperm is about 55 microns long, including its flagellum (like a tail). A micron is one thousandth of a millimeter. So the shrimp version is an absolutely humongous sperm, and it doesn’t even have flagella. Some ostracods can even produce sperm cells that are bigger than the animal that made it.

Why and how did this strange structure evolve? Scientists haven’t been able to say, in part because they didn’t know how long this trait has been around. Now a team of scientists from five countries have some possible answers, based on the oldest example of this gargantuan gamete found to date. The discovery is thanks to guano, or bat poop.

Ostracods are common in any aquatic habitat, and they have calcium-bearing exoskeletons, so they’re readily fossilized. Lots of fossil seed shrimp have been found, but they usually don’t contain soft parts like internal organs. As in most fossils, these tissues usually succumb to microbes or protein breakdown over hundreds of thousands of years, although there are rare exceptions to the rule.

In a new paper, scientists led by Renate Matzke-Karasz at Germany’s Ludwig-Maximilian University report finding fossil shrimp in the phosphate-rich limestone sediments of an ancient Australian bat cave. It dates to somewhere between 16 and 23 million years ago. Fossil shrimp were found with their internal parts — and sperm — still intact. One female specimen contained plenty of sperm cells in her genital receptacle, suggesting some sort of shrimp copulation happened shortly before the animal died. 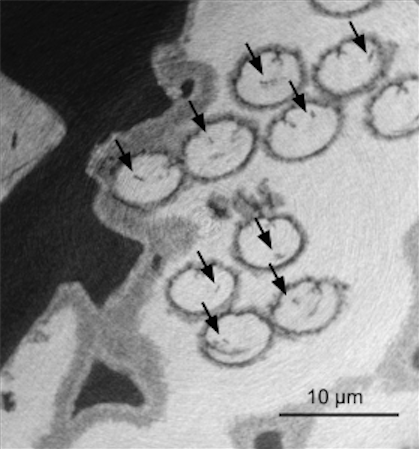 Cross-section of fossil ostracod sperm. The nuclei in each sperm (dark spot) are indicated by arrows.

How is this possible? The research team turned to bat poo to explain. The ancient, now-collapsed cave where the sperm-filled shrimp were found also contained thousands of bat fossils, representing eight different species. The limestone deposits near those fossils contain high levels of phosphorus, zinc, and other elements, the team says. They attribute this to lots and lots of bat guano falling on the cave floor over many years.

“Given the many thousands of bat fossils occurring in the same deposit, it is probable that the water in this cave was enriched with phosphorous produced by copious amounts of bat guano,” they write. The phosphorus helped to mineralize the soft tissues as well as the calcium-containing exoskeleton.

Why does this matter? The fossils are the oldest petrified gametes, and represent important evidence that this unusual reproductive system evolved a very long time ago, and hasn’t changed in tens of millions of years. Ostracods devote lots of energy to producing, storing and transporting these giant sperm cells, but the fact that they’ve been around so long suggests things are working out just fine. “This stands in contrast to the sperm of other taxa, which show dramatic evolutionary divergence,” the authors write. “Consequently, it is not just the origin and function of ostracod giant sperm that are biological enigmas, the lack of evolution of this feature is an enigma in itself.”

The study was published online May 14 in the Proceedings of the Royal Society B.