You could get the plague (but probably won’t)

The disease still thrives in some locations in the United States. 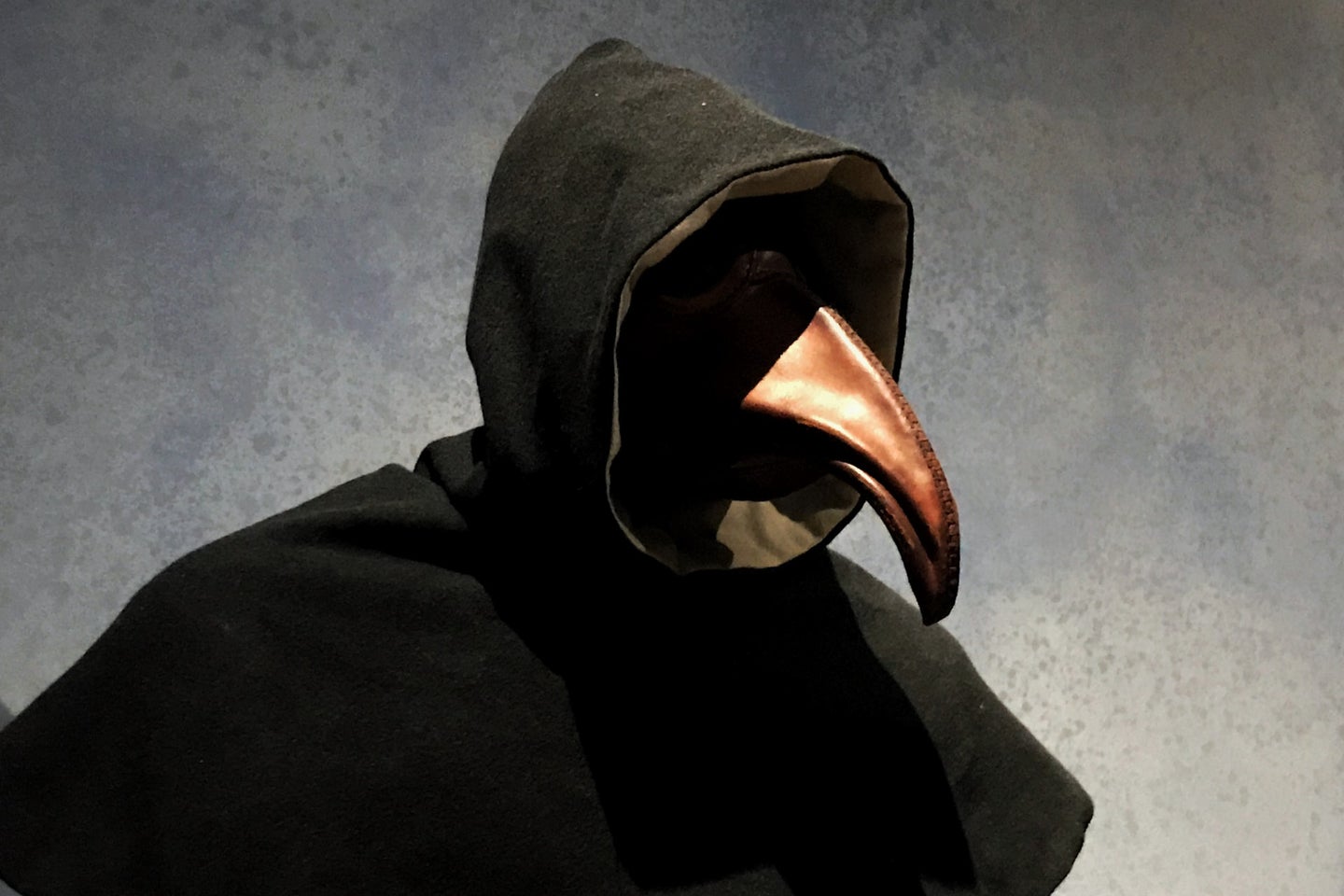 This story has been updated. It was originally published on May 10, 2019.

Today, the scariest thing about the plague is its name.

Given Yersinia pestis‘ past, the ominous classification is indeed justified: Over the course of human history, we’ve witnessed three severe outbreaks that have wiped out, on most occasions, more than half the population in the infected area. So when news that people caught the plague—and died from it—comes out, it can be downright frightening. But the reality is that, despite the name, the plague is just another dangerous species of bacteria. These days we can identify and treat patients with antibiotics before they develop pneumonic plague, when their coughs can spew droplets of bacteria into the air for others to inhale. But the microbe still lingers, mostly in animal populations. On occasion, it pops up in humans.

But that doesn’t mean you are likely to get the plague. In fact, in the grand scheme of today’s infectious diseases, it is by far one of the least likely microbes for the average American to pick up—even if they travel the world. But since you asked, here’s a breakdown of how you might contract this persistent disease.

The world’s first big run-in with Yersinia pestis was the Justinian Plague that began in 541 AD. That was followed by the even more sinister-sounding Black Death or Great Plague in the 1340s, which claimed just over half of the entire population of Europe at the time. Rounding those out is the Modern Plague, which began in China in the 1860s. Scientists finally identified the disease as an infectious agent that time around, caused by a bacterium and spread to humans mostly via fleas. Rats and other rodents like mice and squirrels would become infected with the bacterium, die, and their fleas, now also infected, would look for the next closest living species to feed on—humans.

According to the Centers for Disease Control, smaller outbreaks of the plague have been reported in India in the early 20th Century, in Vietnam in the 1960s and 70s, and most recently, Sub-Saharan Africa and Madagascar, which make up the majority of the cases seen today. It also pops up occasionally in the United States. In New Mexico, for example, most residents are aware of the disease, and know they could potentially contract it.

Better sanitation has helped us thwart any further epidemics. “You don’t see outbreaks like the middle ages and that’s because of sanitation. Back then, people would sleep on hay mattresses on the floor,” says Sandra Melman, an epidemiologist at the New Mexico Department of Health. “There was also no pest control. Now, homes are much better at keeping pests like mice and rats out.”

Despite its ability to turn deadly fast—the bacterium has an incubation period of a few days, and when it does kill it does so in one to seven days—the infectious Yersinia Pestis is also very responsive to antimicrobial drugs. Prior to the discovery of antibiotics in the 1940s, the plague killed about 66 percent of those it infected, especially people who were already sick and the elderly. But once we had drugs that could treat it, those numbers dropped drastically. Today, in the United States, the plague turns deadly only in about 11 percent of cases.

Why is the plague still around?

While the majority of human plague cases in earlier centuries were probably brought about through flea bites, the bacterium also spread rapidly through rat populations. Those infections were mostly eliminated in city and urban rats, but the disease made its way to rural populations of rodents. It’s these carriers, according to the CDC, that have allowed the bacterium to persist today.

The plague first made its way to the United States in the early 1900s on commercial trading ships through various port cities, including ones on the west coast, like San Francisco. From there, the bacterium spread via fleas, rats, and other rodents to rural areas throughout the country. While it has all but died out in other parts of the country, it has remained endemic to the four corners (where Utah, Colorado, New Mexico, and Arizona meet) and other parts of the west and southwest.

According to the American Society of Tropical Medicine and Hygiene, 21,725 cases of the plague were reported from 2000 to 2009. Of those cases, about 7.5 percent were fatal. Most of them were in Africa. Just 56 individual occurred in the United States, of which 7 were fatal. Those cases occurred in Colorado, Arizona, California, Oregon, and Nevada, but mostly in New Mexico. As of 2015, the CDC has confirmed an additional 11 cases of the plague, sprinkled throughout those states (aside from Nevada) and one in Georgia.

The reason, according to Sandra Melman, is because of the specific rodent populations that thrive in the area. Melman says prairie dogs are particularly prone to the bacterium, with the plague wiping out 95 to 99 percent of affected populations. “When this happens, hungry fleas, rodents, and other animals take over the leftover food that the prairie dogs left. And they go back and forth from where the prairie dogs are to where humans are,” Melman says. “We call this an epizootic event.”

This is also the reason the plague is so hard to eliminate. “Once you have more than one host and vector, you would have to eliminate all rodents, fleas, and other animals that have come in contact, and that is nearly impossible,” Melman says.

But prairie dogs only thrive in some parts of the country. Past the 100th Meridian, which is where the Great Plains begin, the environment is not ideal for these animals, Melman says. Without prairie dogs, the chances of the plague remaining endemic in any region goes down.

[Related: What a 5,000-year-old plague victim reveals about the Black Death’s origins]

Why New Mexico in particular? Malman says the plague is more likely there than neighboring states because most of the states’ residents live in rural areas where contact with plague-carrying animals in more common. Indeed, about half of the U.S.’s human cases of the plague in recent years have been found there. Each year, the Land of Enchantment sees a handful of cases, in both humans and animals, like dogs and rats. In April of this year, New Mexico reported its first confirmed case this year of the plague in an animal, a ranch dog in Quay County, east of Albuquerque. For those living in these potentially plague-ridden areas, that can seem pretty scary. But if you live in a plague-prone region, just stay up-to-date on the symptoms.

The plague can take on three common forms: bubonic, pneumonic, and septicemic. In all three, people experience general symptoms like fever, chills, and malaise, but pneumonic can affect the lungs and feel like pneumonia; septicemic can attack a person’s blood and tissue and even turn their hands and feet black—a sure sign you should see a doctor; and bubonic, the disease’s most notorious form, can cause extremely swollen and bulb-like lymph nodes in the armpits and groin. If you have symptoms of this bacterial infection, it’s important to catch them early. Without antibiotic treatment, the plague turns deadly in about 50 to 60 percent of cases.

Melman says the best way to tell if you have the plague versus any other illness is the swiftness of the disease’s onset. “In most cases a person is going to be fine and then get very, very sick with fevers of 102, 103, 104, which hits very quickly. You are fine, and then you wake up and it hits you really quick.” She also says that unlike bubonic or septicemic, the pneumonic type is most infectious. In New Mexico, she says, once a person with this type of plague has been identified, they treat with antibiotics anyone with which that person has come into contact.

But by far, Melman says, the best strategy is prevention. For people who have pet dogs and cats, don’t let them roam free, and be sure to treat them with flea medication. For hunters in rural areas, cook the meat thoroughly and carefully. While most New Mexicans know about the plague, for those new or visiting, public health campaigns and education are key.

If you don’t live in areas where the plague has been identified, it’s incredibly unlikely that you’ll be infected with the bacterium. Regardless, remember that despite the name, this disease can easily be treated with antibiotics. Recognizing the symptoms and seeking proper treatment is key.