Meet The Germs Sharing Your Seat On The Subway 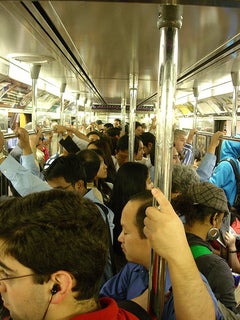 The subway is crowded–and not just with people. Sharing your commute are trillions of invisible microbes. They’re on the seats, poles, ticket kiosks; pretty much on anything people hold, lean against, sneeze on, swipe, or bump into. “We’re constantly shedding bugs into our environment,” says Curtis Huttenhower, an associate professor at Harvard’s School of Public Health.

Huttenhower is the senior author of a study published today that reveals the character of the microbial community that shares the Boston transit system.

The notion that the subway is a germ-laden place is nothing new. In 2011, San Francisco State University caused a stir when it announced that local trains had fecal microbes and flesh-eating bacteria on the seats. And last year, another shocking study claimed to find plague and anthrax germs on New York City subway trains, though it was later widely discredited.

But Huttenhower and his team weren’t simply out to catalogue nasty microbes and cause a stir. They wanted to get an overall profile of the microbes in the subway environment, and gain a better understanding of the interactions between humans, microbes, and the space we share. “We really set out to understand how a transit environment–where thousands and thousands of people constantly interact–contributes to the harmless transmission of microbes between people. Does that environment serve as a sort of reservoir or exchange for microbial communities?”

The researchers swabbed a variety of locations–seats, hand rails, hanging grips, walls, seats, and touch screens at ticket booths–on three different subway lines and five subway stations in Boston. Using metagenomic sequencing, the team was able to profile the microbes. What they found was a familiar cast of characters.

They also discovered who was living where. Skin microbes were the most prevalent overall, found on all of the surfaces examined. But oral associated bugs, which are transferred by touching, coughing, or sneezing, were prevalent on face-level surfaces like hand grips and poles. And seats revealed genital-related microbes, which can be transferred through clothing. The team found little variation based on location of the train lines or the demographics they served.

As for those nasty bugs other studies trumpeted, Huttenhower said in a statement, “We were surprised to find that the microbes that we collected on surfaces that people touch—and sometimes sneeze on—had low numbers of worrisome pathogens or antibiotic resistance genes. These environments have drastically lower virulence profiles, in fact, than are observed in a typical human gut.”

The results are published in the American Society for Microbiology’s journal mSystems.

Huttenhower believes that in the future, this kind of baseline understanding of microbial populations in our built environment could lead to early warning systems, alerting us to elevated levels of pathogens in trains or other shared spaces, such as office buildings, sports arenas, and schools.

However, the vast majority of these microbes are harmless, he says. “Something I’ve been really happy about in the last few years is the better popular understanding of things like human gut microbes. It’s not a bad thing that we have lots of bugs in us; it’s how we evolved, and it’s how our metabolism and nutrition normally works.”

So next time you’re on the subway, remember: That empty seat? It’s taken. But thankfully your microbial fellow passengers are happy to share.