What a 5,000-year-old plague victim reveals about the Black Death’s origins

It turns out the bubonic plague wasn't nearly as contagious—or gruesome—in the Neolithic era. 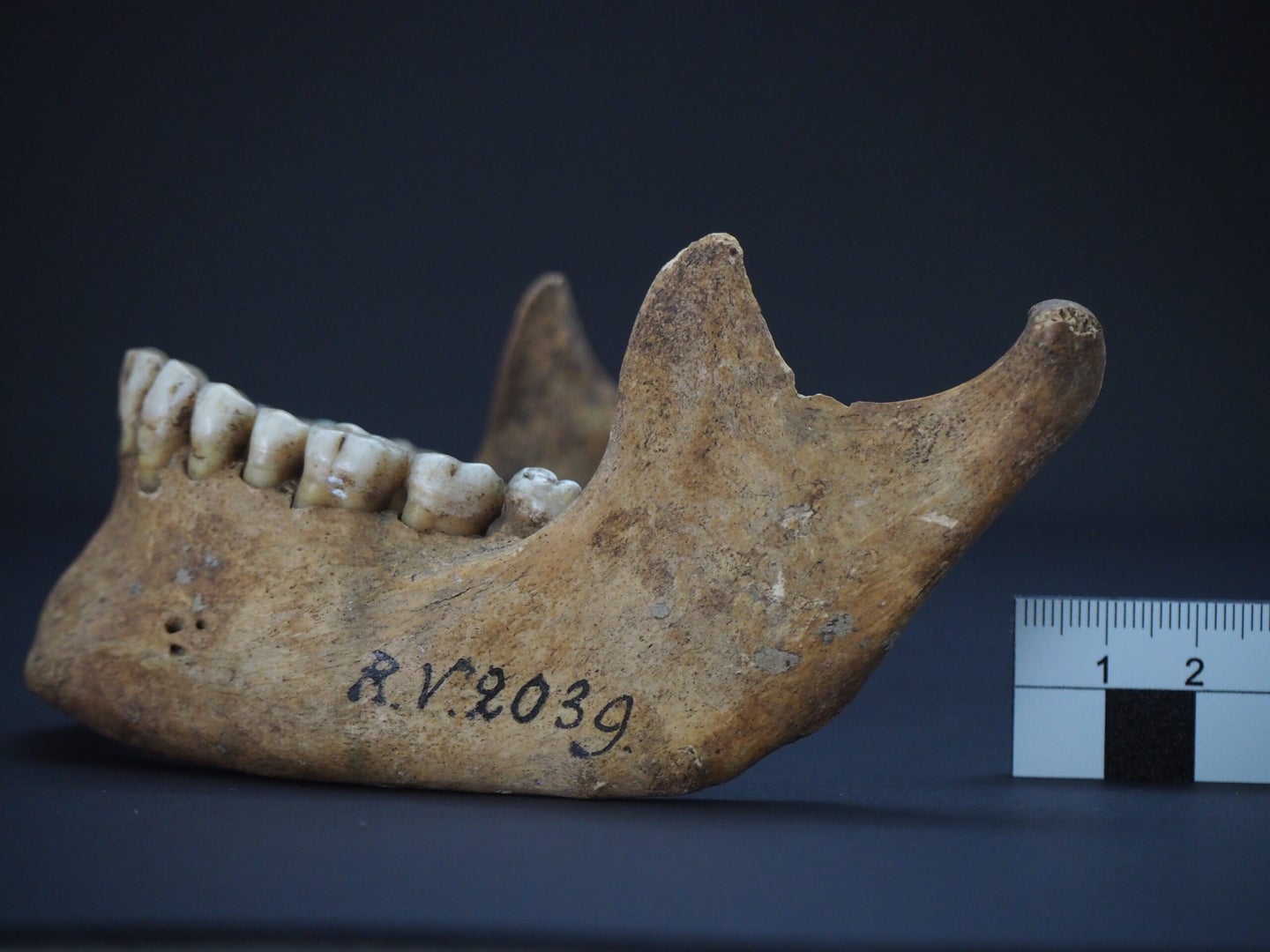 The jaw bone of the 5,000-year-old man known as RV 2039, who was the oldest known victim of the bubonic plague. Dominik Göldner, BGAEU, Berlin
SHARE

In 1875, amateur archaeologist Carl Georg Count Sievers conducted excavations near the banks of the Salaca River, in what is now modern day Latvia. He discovered two graves: one of a 12 to 18 year old girl (dubbed RV 1852), and another of a 20 to 30 year old man (RV 2039). Almost 150 years later, analysis of RV 2039 shows that not only is he more than 5,000 years old, but he had an ancient strain of the bubonic plague—the oldest case known to date.

Scientists didn’t go in expecting to find remnants of plague. When they genetically analyzed RV 2039’s remains, they were surprised to find the genome of Yersinia pestis, the infectious bacteria responsible for the bubonic plague. The detected strain is the oldest discovered so far—it split from its bacterial predecessor more than 7,000 years ago.

It also looks different from the Y. pestis of more recent epidemics. Genetic analysis of the bacteria in the ancient RV 2039 also revealed that the bubonic plague-inducing microbe lacked a crucial genetic element: the gene that lets fleas act as vectors to spread the plague, which is also the gene that lets the bacterium efficiently infect humans.

The missing gene is additionally responsible for those infamous pus-filled buboes (or swollen lymph nodes, usually in the armpits or groin) that we associate with the medieval Black Death. Thankfully for RV 2039, his infection was likely not so painful, and he didn’t suffer the fates of the victims of the Middle Ages. Scientists deduced from the remains that his infection was probably mild, but longer lasting. He still likely died as a result of the infection, though. The findings were published in Cell Reports.

Instead of transmission via flea, RV 2039 likely contracted the plague directly from a larger animal. He was a hunter-fisher-gatherer, and probably got the bacteria through the bite of an infected rodent—although he could’ve killed a rodent for food or personal decoration and picked it up that way, the study notes.

Luckily for his companions, because of the plague’s still unevolved form, the bacteria wasn’t yet able to spread easily from person to person. None of the people buried in the same region as RV 2039 had Y. pestis in their remains.

“What’s so surprising is that we see already in this early strain more or less the complete genetic set of Y. pestis, and only a few genes are lacking,” senior author Ben Krause-Kyora, head of the aDNA Laboratory at the University of Kiel in Germany, said in a statement. “But even a small shift in genetic settings can have a dramatic influence on virulence.”

Previous theories about the plague in early human civilization suggest that Y. pestis evolved mostly in cities around the Black Sea, where people lived in close proximity. But RV 2039 lived 5,000 years ago, long before humans created city life. These findings, which show that the plague at the time was relatively mild and not infectious, also contradict other theories suggesting the plague was responsible for mass deaths at the end of the Neolithic age some six millennia ago.

Nevertheless, research like this brings scientists closer to understanding how the Black Death came to be, and how the plague has influenced our own genetics. “Different pathogens and the human genome have always evolved together,” said Krause-Kyora. “We know Y. pestis most likely killed half of the European population in a short time frame, so it should have a big impact on the human genome.”