Sometimes it takes a village to raise a bridge When we think of bridges, we often envision soaring creations that carry vehicles on airborne trajectories that would be impossible without modern engineering.

But most bridges are unnoticed and unsung. We drive over them every day without realizing it. These span more humble distances, like drainage ditches, or underpasses, or minor creeks and streams. They’re unassuming, but when they go, major problems result.

Especially in places like Lincoln County, West Virginia. Deep in the heart of Appalachia, communities here were cut off from the world when extreme floods washed their modest bridges away. Few communities had the money to repair these transportation lifelines.

That is, until the volunteers arrived.

You may have heard of a Mennonite barn raising, where an entire community comes together to erect a barn for a single family. You may be less familiar, however, with a Mennonite bridge raising. (And the bridges are surprisingly sophisticated.)

In parts of West Virginia, bridge raisings have become a necessity. Last year, flooding in the southwest region of the state destroyed hundreds of small, privately owned bridges linking rural homes to public roads. While the Federal Emergency Management Agency provided public assistance for disaster relief following the floods, it did not offer individual assistance to struggling landowners. And the flooding problem is only getting worse over time.

Bridge raisings have become a necessity in parts of West Virginia.

Ruth and Joshua Plumley of Lincoln County, West Virginia saw their personal access bridge repeatedly destroyed by floods in 2015. Unable to restore the bridge, the elderly couple found themselves stranded in their own home when the creek filled.

Enter the Mennonite Disaster Service (MDS), a volunteer network of Anabaptist churches. The organization gave the Plumleys an early Christmas gift, a new bridge made to survive repeated flooding.

“We couldn’t have a better one,” said Ruth Plumley. She noted that, “floods took the [previous] bridge out twice in April. We built it back the first time, but it was never as good as this.”

Often, a personal access bridge is made entirely of wood and rests on thin footings set at the edge of a creek. This leaves it vulnerable to flooding. The Plumleys’ bridge, however, is girded by four solid steel beams and rests on concrete footings set apart from the creek. Designed by JZ Engineering, a structural engineering firm based in Virginia, the bridge was built for resilience. 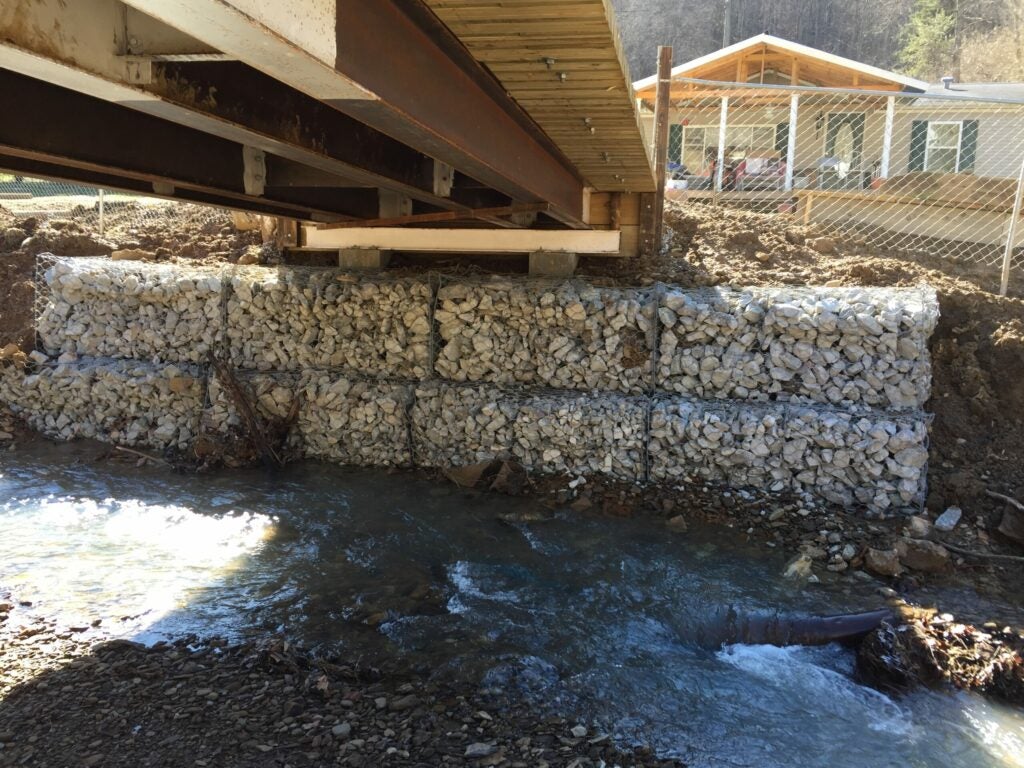 Rocks under the bridge

The Mennonite Disaster Service bridges are anchored deep into heavy rock that won’t erode or wash away during flooding. The new bridges are also much higher from the creek bed than their predecessors, lessening the chance that the new bridge will get washed away.

MDS is partnering with West Virginia Voluntary Organizations Active in Disaster, an alliance of disaster relief organizations. Their joint effort has brought volunteers from Ohio, Pennsylvania, Virginia and even Canada. The Plumleys’ bridge was the first private access bridge they constructed.

“I came here because I see people like the Plumleys as my neighbors in need,” said MDS project director Peter Thiessen. “I plan to build one bridge at a time here.” Volunteers have already completed five of 20 planned bridges, believing their efforts will prove essential to the region’s long-term recovery.

“The problem is these floods have just become more and more intense,” said Mark Beach, a spokesman for MDS. “We need to build with the expectation that climate change is going to be a factor.”

Over the last half-century, floods have become more frequent in the Midwest, including in West Virginia, according to a paper published in the journal Nature Climate Change. This trend is set to continue.

The Third National Climate Assessment warns that, in the future, West Virginia can expect more severe storms and heavier rainfall, driving up the risk of floods. River flooding, notes the report, “will increase the vulnerability of the region’s residents, especially its most disadvantaged populations.”

While the federal government has made a push for climate-resilient public infrastructure, individuals are often left on their own. Lacking federal assistance, flood-struck homeowners, like those in West Virginia, must rely on crowd-sourced rebuilding efforts. This is especially true where aging infrastructure cannot withstand the rigors of a changing climate. The Plumleys offer a prime example.

“They deserve this bridge,” said R.D. Stowers, the Plumley’s nephew. “They’ve put up with a bad bridge for a long time.”

Jeremy Deaton writes about the science, policy, and politics of climate and energy. You can follow him at @deaton_jeremy.