Ancient Supervolcano Spewed Rivers Of Ash And Gas Over 100 Miles 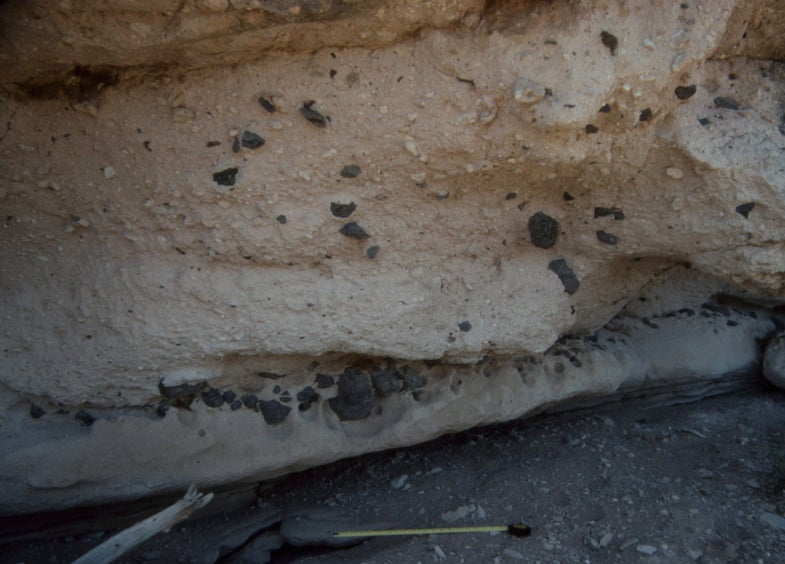 About 18.8 million years ago, at what would become the intersection of California, Arizona, and Nevada, a volcano exploded. As magma pressed up towards the surface, gases trapped in that magma expanded, blowing the molten rock apart into ash in an eruption that made Mount St. Helens look like a sneeze.

The ash and gases from that eruption moved over the landscape without mercy, a furious river of volcanic material called a pyroclastic flow that coated the surroundings for over 100 miles.

It was a huge event, but a recent study published in Nature Communications found that the erupted material moved over the landscape a bit more like the tortoise than the hare.

Using experimental techniques combined with field data, researchers found that the pyroclastic flow probably moved across the landscape at a speed of 10-45 miles per hour–fast, yes, but much slower than the jets of ash that others had predicted.

Back in the 1980’s geology PhD students Greg Valentine, a geologist now at the University at Buffalo, and David Buesch, now at the United States Geological Survey mapped out the deposit formed by the ash from the eruption. They noticed several large rocks embedded in the ash, picked up from the landscape as the flow roiled its way along.

Then, nearly 30 years later, they came back to their field work. They teamed up with Olivier Roche, a geologist at Blaise Pascal University in France who was making physical models of pyroclastic flows using beads. By sending gases and ash-like particles over a layer of beads, he was able to create a model for how ash and gas would react with rocks as they moved across the landscape.

“Intuitively, most of us would think that for the pyroclastic flow to go such an extreme distance, it would have to start off with a very high speed,” said Roche. “But this isn’t consistent with what we found.”

Instead, they found that in order to pick up the rocks found embedded in the ash, (which ranged in size from a few inches to a few feet wide) the pyroclastic flow would have to be very dense at the bottom and also move relatively slowly. If it moved at the high speeds that were anticipated, even larger rocks would have been caught in the deadly current.

The combination of field observations and experiments are extremely important. Though pyroclastic flows are a hazard on volcanoes today, researchers are still trying to figure out more about them, without losing their equipment…or their lives.

In the field, “you can almost never see whats going on in the dense part of the pyroclastic flow” Valentine told Popular Science. That’s why researchers like Roche and others are turning to experimental and computer models to interpret deposits.

This volcano, the Silver Creek caldera is one of a select few massive eruptions that some volcanologists refer to a s supervolcanoes, distinguished because of their huge size. Visually, they don’t look like a stereotypical volcano, which you might imagine as a mountain ready to blow its top. “They’re almost like anti-volcanoes” Valentine said, referring to the shape of volcanoes like Silver Creek caldera, or Yellowstone.

Instead of the erupting magma slowly building up over time to form a mountain in a series of smaller eruptions, during the eruption of a supervolcano, so much magma pours out of the Earth it creates a huge depression. During the eruption 18.8 million years ago, over 300 cubic miles of magma evacuated the earth, so much that it created a depression 18 miles wide on the Earth’s surface.

Needless to say, it was a large event. While eruptions like this are unknown in the scope of written human records, smaller pyroclastic flows do happen all the time.

“We want to understand these pyroclastic flows so we can do a good job of forecasting the behavior of these flows when a volcano erupts,” Valentine said. “The character and speed of the flows will affect how much time you might have to get out of the way, although the only truly safe thing to do is to evacuate before a flow starts.”