On The New Apple Maps: What Would It Take For Us To Leave the iPhone?

The latest version of the iPhone is the first one that provides a legitimate reason to ditch Apple. 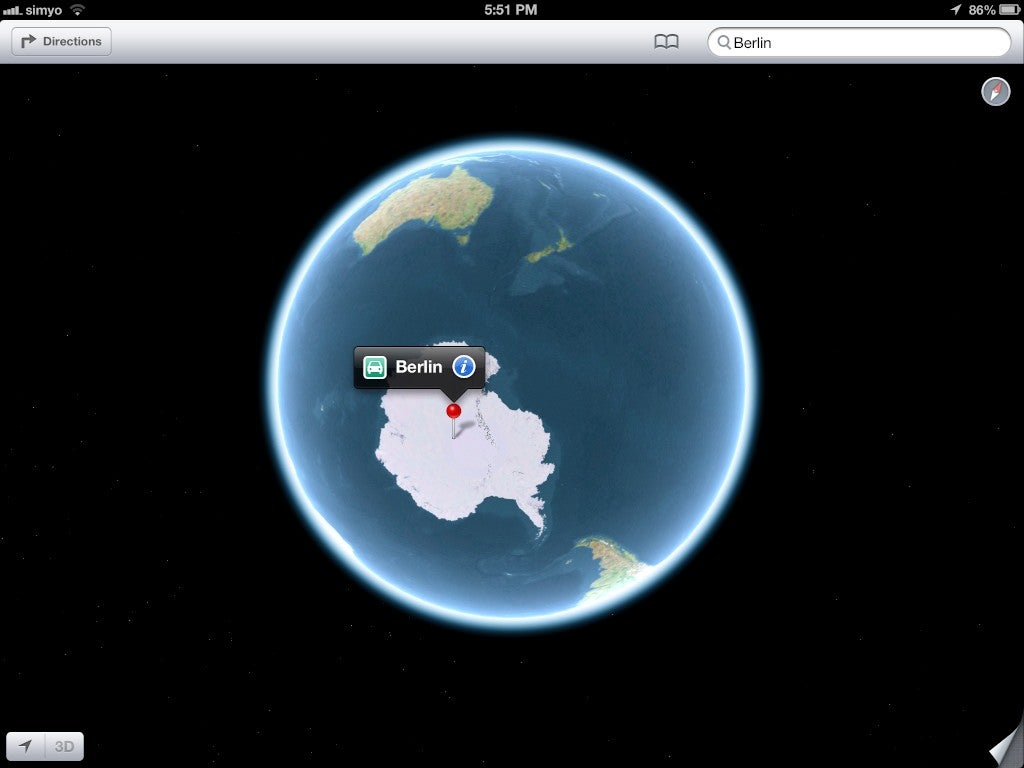 Remember when the iPhone 4 came out, and it had that weird antenna issue where, if you held the phone tightly in an unnatural position and squeezed like it was a lime and you desperately needed lime juice, it’d lose its signal? And Apple had to give us all free rubber-band-cases for our phones? A lot of people claimed they were switching from iOS because of that.

That was a dumb overreaction. But switching from iOS due to the now-famously inferior new Apple Maps app is not.

As a beta tester, I’ve been using iOS 6, which replaced the old stalwart Google Maps with Apple’s homegrown Apple Maps, for a couple of months now. Apple Maps has been basically a disaster for me since I upgraded.

For example. I’m at work in Midtown Manhattan, but about to leave to meet some friends at a bar called The Scratcher, in the East Village. I’ve never been. I search in Apple Maps It lags for a minute, then gives me no results. Google gives me the address, which I enter manually into Apple Maps. Apple Maps gives me a result immediately. Hurrah! It puts a pin in a location on 5th Street in Brooklyn.

The bar is not in Brooklyn.

How New Yorkers travel. In New York, having a car is viewed as a mid-level superpower, not as good as flight but way better than, like, x-ray vision. Mostly we get around by public transit, by taxi, and by bike. Apple Maps, it turns out, is useless to us. The maps tells us where subway stations are and what their names are, but not which of the (more than 20!) train lines stops there.

There are also no directions for traveling via subway, bus, or bike. On the other hand, if you drive a helicopter, you probably appreciate the aerial 3-D city models. I can’t imagine who else would find those useful.

Laura June, features editor at gadget supersite The Verge, switched to Android–the initial switch was motivated by her iPhone’s inopportune trip into a toilet bowl, but she hasn’t gone back to iOS in large part because of Maps. Switching OSes out of protest always seems like an extreme reaction to me; it’s expensive, since you have to buy all your apps and accessories all over again, and there’s always an adjustment period during which you’re kind of annoyed and inefficient. So I tend to think there’s not all that much a phone-maker can do to provoke a switch, either for or from. But in this case I think she’s justified.

The maps app is one of the purest tools on a phone, maybe even more than the actual phone part. When I tore a tendon in my ankle and sat on the sidewalk trying to decide if I should call an ambulance, I looked up the nearest hospital on my maps app. Google Maps was how I found a clam shack on Cape Cod, gourmet sausages in Chicago, burritos in San Francisco. It was how I found my way back to my apartment for the first two weeks after I moved to New York, how I navigated to my friend’s lake house in the Poconos. This tool, this incredible tool, is one of the most important parts of your phone, even if you check if anyone’s retweeted you more often than you pull it up. If it’s broken, it’s not a small deal.

Maps is the one thing that’s made me think about switching platforms. And Google Maps on iOS was never particularly good. It was adequate. Compare it to Google Maps on Android, which has all the bells and whistles–bike and transit navigation, free turn-by-turn, offline maps. It is and always has been excellent, one of the strongest arguments in favor of Android–and now it’s much, much stronger by comparison. Even Bing Maps or Nokia Maps or whatever you can get on your Windows Phone, that’s pretty decent, too.

This is kind of an unusually shameless business move from Apple; it’s pretty clear now from all the Tumblrs and the outrage on Twitter and my own lengthy ramblings that people are definitively finding Apple Maps worse than Google Maps. It’s a decision that makes the iPhone — whose hallmark has always been superior user experience — a distinctly inferior product. Almost certainly Google will come out with a version of Maps for iOS 6 (according to some reports, it’s already finished and just awaiting approval). And mostly, people will download it, use it, and begin to forget that Apple Maps ever existed, except when iOS tries to open location links in Apple Maps rather than the app we’ll all use. But for the first time, when someone says “that’s it! I’m switching to Android!,” I’ll take them at least a little bit seriously. Apple’s never given its customers a better reason to ditch them.

HERE ARE SOME WORKAROUNDS, IF YOU DON’T SWITCH

Since I’ve been using Apple Maps for awhile, I’ve figured out a few of its quirks. It has serious trouble finding any address if you don’t include the city, for example. A search for “364 5th avenue,” even if you’re standing right in front of it, might direct you to whatever the equivalent of “fifth avenue” is in Ulaan Bataar. If you change that to “364 5th avenue, new york, ny,” you’ll have more luck.

Yelp has also been an invaluable service for me, maybe the first time I’ve ever said that. Yelp knows where stuff is, much better than Apple Maps does. Search for it in Yelp, tap the map, and it’ll open, mostly flawlessly, in Apple Maps.

For cityfolk: get a localized public transit app. I like Embark NYC for New York; it has a full map, plus schedules and customized alerts for outages.

Do your work in Google. If you do a Google search for wherever you’re trying to go and then plug the address right into Apple Maps, you’ll have a way better chance of finding it than if you let Apple do the searching.

Don’t bother with the in-browser Google Maps, unfortunately. This looks like a savior, especially since you can pin it right to your homescreen like an app, but it’s slow and kinda awkward to use–if you switch apps, it has to reload, that kind of thing. Sigh.