Hospitals are helping make us all sick

Greenhouse gas emissions from health care will be responsible for the loss of thousands of years of life. 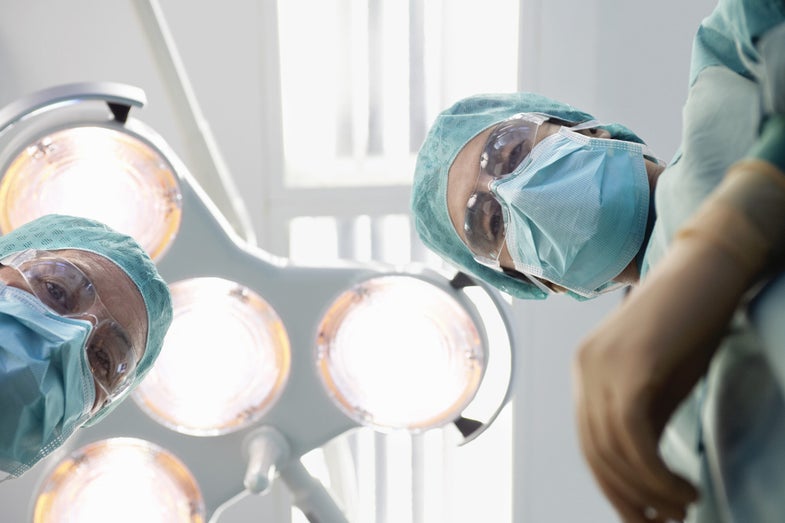 Skin and gastrointestinal infections are on the rise in Houston, Texas as the result of sewage-laden floodwaters. In Puerto Rico, the thousands of people living without clean water are at an increased risk of all sorts of diseases. Natural disasters are public health disasters.

As temperatures go up due to climate change, extreme weather events (like Hurricane Maria and Hurricane Harvey) become more frequent, and more intense. Warmer temperatures are also a public health problem in and of themselves, aiding the spread of infectious diseases and increasing rates of malnutrition. The changing climate is going to make people sick.

And the healthcare system in the United Sates—which is supposed to keep people healthy—is partially to blame.

Between powering facilities, manufacturing medical supplies, creating pharmaceuticals, and other activities, the U.S. healthcare system is responsible for a solid chunk of the greenhouse gas emissions that contribute to climate change; it released the equivalent of 614 million metric tons of carbon dioxide in 2013, and around 10 percent of the total emissions in the United States.

However, most healthcare professionals don’t have a good understanding of the harms caused by their industry, says Jodi Sherman, professor of anesthesiology and director of sustainability for the department of anesthesiology at Yale University. “The harms are indirect,” she says. “We’re concerned with the patients right in front of us. It’s hard for us to wrap our mind around how we’re affecting human health that’s distant geographically, and also in time.”

As citizens, Sherman says, everyone has a responsibility to try and reduce their climate impacts. But for the healthcare system, there’s an additional charge: “We’re the only ones that have the principle of ‘first, do no harm.”

Sherman and her collaborator, Matthew Eckelman, professor of civil and environmental engineering at Northeastern University, wanted to put a number on the damage of healthcare emissions in a form familiar to healthcare professionals. Based on a series of calculations, they determined that the contribution to climate change by the institutions trying to protect your health will be responsible for the loss of 123,000 to 381,000 years of healthy life in the future. The results were published in the American Journal of Public Health in October.

The study used models projecting health damages from climate change-related effects of five health risks: malaria, floods, malnutrition, diarrhea, and cardiovascular disease. It used a range of models, Eckelman says, and the researchers were careful to use only those that were well-cited and well-reviewed. Across all of the different systems, malnutrition caused by climate change topped the list as the biggest contributor to health problems. And, Sherman says, the numbers they used were conservative estimates.

Putting a number on the health impacts of climate change from one particular sector is complicated, notes Howard Frumkin, a professor at the University of Washington School of Public Health, in a commentary on the research published in the same journal. To make these sorts of calculations, scientist grapple with a maze of variables and uncertain predictions. They have to track down all the sources of emissions that support the healthcare system, and there are countless ways to project out impacts those emissions will have in the future.

Sherman hopes this paper serves as a call to action for the healthcare community. “Knowledge about the magnitude of our impact is severely lacking,” she says. She wants the industry to respond in the same way it did to data about the loss of life due to medical errors, which sparked an entire patient safety movement.

Strategies like increasing energy efficiency should be a no-brainer for hospitals, says President of Health Care Without Harm Gary Cohen. “It saves money, reduces the use of fossil fuels, and is more efficient,” he says. Energy efficient systems, like combined heat and power, also help hospitals stay up and running during natural disasters. “They allow resilience.”

Hospitals and healthcare providers should also put pressure on manufacturers up the pipeline to switch to more energy efficient practices, Sherman says. “Certainly we have the power together to demand better manufacturing practices and better materials.”

And by entering the conversation on climate change, hospitals and the healthcare system can shift the conversation around the importance of reducing emissions and reducing waste, says Cohen. “It goes from being about the environment and protection of polar bears, to being really about protecting the health of the communities,” he says. “It’s a complete reframing of the climate issues.”