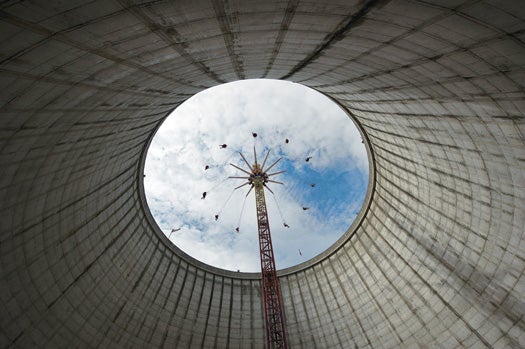 The 190-foot-tall whirling aerial swing in the Wunderland Kalkar amusement park, near the German-Dutch border, claims an unusual distinction: It’s the only ride in the world constructed in a decommissioned nuclear cooling tower. (You can read our primer on nuclear power plants here.) In 1995, Dutch developer Hennie van der Most bought the defunct nuclear power plant from the German government. The site was supposed to house an SNR 300 fast breeder reactor, built from 1972 to 1985, but it never became fully operational.

After the sale, van der Most converted the plant site into a theme park and recreation center. Wunderland Kalkar sees an average of 600,000 visitors a year and boasts more than 40 attractions, including rock-climbing on the outer walls of the cooling tower.