It might give us a clue about where it could spread 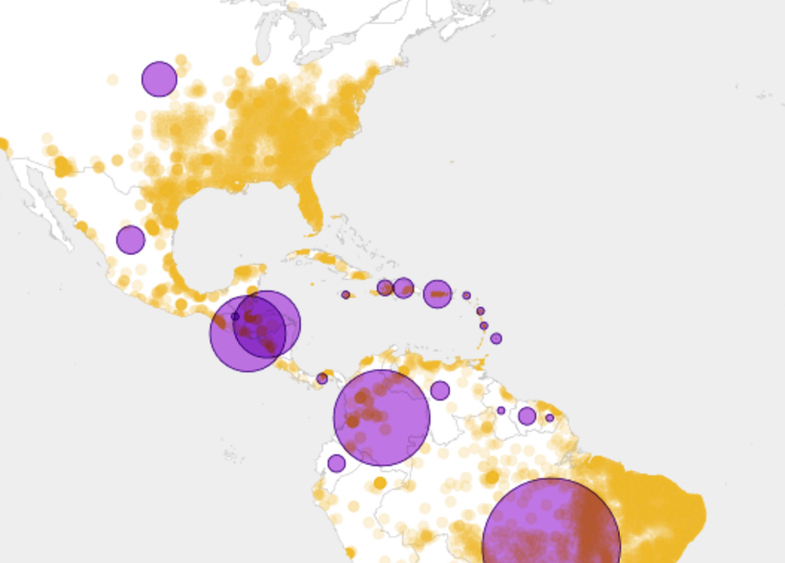 Since the first case of this outbreak was diagnosed in April 2015 in Brazil, the Zika virus has spread throughout the Americas. While mosquito-borne virus has fairly mild, flu-like symptoms, it’s also thought to cause microcephaly, a birth defect in which babies are born with heads that are smaller than normal. Because mosquito bites are so hard to prevent and there’s currently no vaccine or treatment for Zika, the World Health Organization has declared Zika a global public health emergency. Yesterday the governor of Florida declared a state of emergency in the state’s nine counties in which cases of Zika have been diagnosed.

When you see the number and span of Zika’s incidence, it’s easy to see why public health officials are worried. This interactive map depicts the number of diagnosed cases of Zika virus by country, denoted by purple circles. It is missing three new cases announced yesterday—two in Australia and one in Ireland, the first to be diagnosed outside the Americas. Officials expect more cases to follow in these places and others.

The map also shows the prevalence of the Aedes mosquito, in yellow. Bites from the Aedes mosquito are known to transmit Zika, though researchers are starting to learn about other methods of transmission through blood transfusions, and maybe sexually. It’s a chilling indication of just how far this disease could be carried around the world. Scientists have accelerated efforts to create a Zika vaccine, which will hopefully thwart the spread of the disease to other continents.

The map was created by data scientists at CartoDB.