Almost good enough to be transplanted into humans 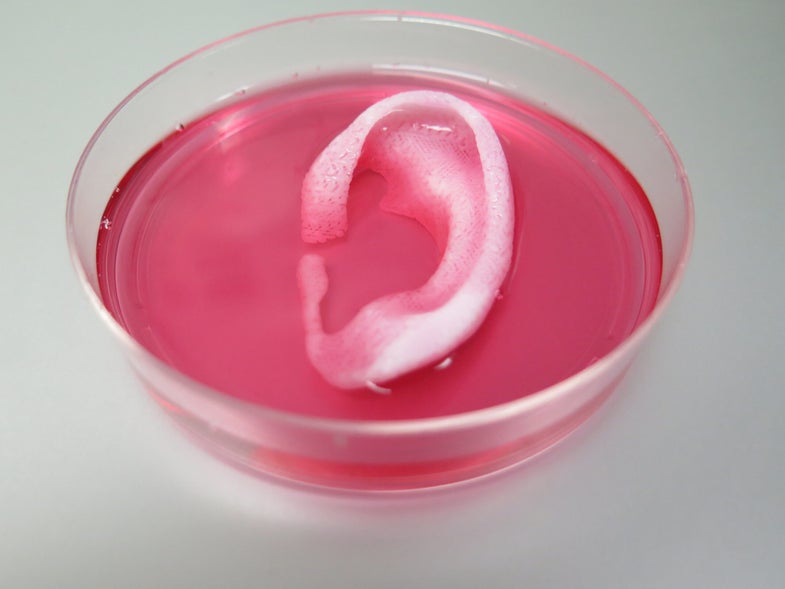 Because the demand for donors’ organs and tissues is so high, researchers have spent years engineering synthetic tissues that could be transplanted into humans. But that’s not very easy to do—many of the gel-like tissues have been too mushy to be moved into a living organism, and without the intricate pathways in the tissue through which oxygen and other nutrients can travel, the living cells inside don’t survive long.

Now a team of researchers from Wake Forest University has created a 3D bioprinting tool that creates large synthetic bone, cartilage, and muscle tissue that is viable for weeks or months at a time when implanted in animals. With a bit more work, the researchers believe these 3D printed tissues could be transplanted into humans, according to a study published today in Nature Biotechology.

The tool, called the Integrated Tissue-Organ Printing System, creates synthetic tissues out of a biodegradable polymer that contains living cells. This mixture is dabbed into the desired shape through nozzles that are fractions of an inch wide. The printer simultaneously creates an outer mold that dissolves once the tissue has hardened, leaving behind a tissue lattice that is structurally sound but also contains tiny channels through which oxygen can reach the living cells. With CT scans taken before the printing begins, the tissue can be printed into the exact shape needed in the patient’s body.

The researchers printed a human-size piece of jawbone, the cartilage of an ear (complete with complex folds), and soft muscle tissue. They then took small samples of these synthetic tissues and implanted them: the bone and muscle went in rats, and the cartilage in mice. When they checked on the implants after a number of weeks, they found that each of the synthetic tissues had been integrated with the rat’s own tissues. The synthetic ones were healthy and working well.

While the 3D printed method takes longer than other techniques that make viable synthetic tissues, the tissues it produces are larger. To work around the structural challenge presented by larger synthetic tissues, researchers had previously been working on the tiniest scales.

The researchers haven’t yet tested these tissues on humans. Before doing that, they intend to make synthetic tissues with different types of cells from the body. If they can do that, they would want to extract some of the human’s own cells to put into the synthetic tissue. That would help the tissue integrate better, making the body less like to reject the transplant.