After W.H.O. meeting, resources will be pooled to fight the outbreak 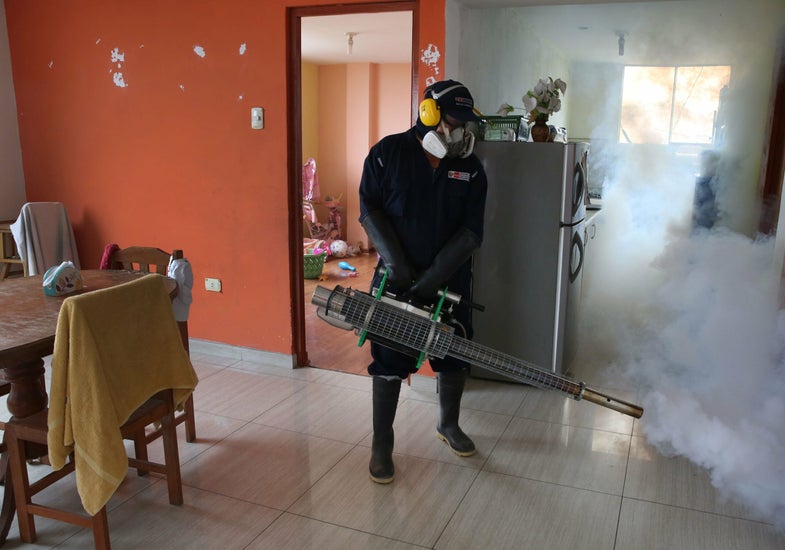 A health worker fumigates against the Aedes aegypti mosquito, a vector of the Dengue, Chikunguya and Zika viruses, inside a house in Lima, Peru, Friday, Jan. 29, 2016. The Zika virus causes only a mild illness in most people. But there's mounting evidence linking it to a birth defect, especially in Brazil. (AP Photo/Martin Mejia). Martin Mejia
SHARE

Today, the World Health Organization (W.H.O.) declared the Zika virus outbreak a public health emergency, placing it in the same category of concern as the Ebola virus in 2014 and 2015.

This alarm means the virus–which has spread to over 20 countries in Latin America–will receive added resources and will enable governments around the world to prioritize resources to combat the outbreak. The announcement was made after an emergency committee meeting today in Geneva that consisted of 18 W.H.O. experts.

One of the main topics the researchers discussed was the suspected link between the Zika virus and microcephaly — a rare neurological disorder that causes babies to be born with abnormally small heads. While WHO experts couldn’t say for sure, they agreed that a causal relationship is strongly suspected.

The virus has also been linked to Guillain-Barré syndrome, a neurological condition that can cause paralysis and is often triggered by a virus or bacteria.

Without the strong link between infection with the Zika virus and these two conditions, a public health emergency would not have been made over Zika, says David L. Heymann, the chair of the emergency committee, as the virus only causes mild symptoms in about 20 percent of those infected.

As the Zika outbreak continues to increase across Latin America, public health officials are strongly urging pregnant women or those planning to become pregnant not to travel to those areas.