Freaking out about heavy metals in your food? Here’s what you should know

Testing has many concerned, but don’t panic just yet. 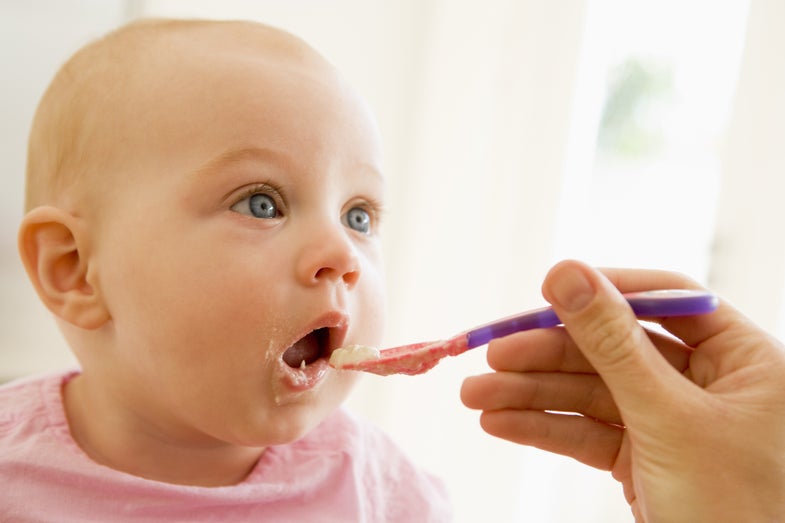 Heavy metals aren’t just something to avoid if you don’t like Black Sabbath. But while you’ve probably heard of this group of elements (and the dangers associated with ingesting them), you might not know why they’re such a worry to health experts.

This is all especially relevant given how many products we’re finding heavy metals in. Baby food is just the latest. Consumer Reports tested a variety of the top brands and found every product has measurable levels of at least one heavy metal, and two-thirds had worrisome levels. You should read their full report, but even the basic outline of their findings raises some questions. How much is a ‘worrisome’ amount? Where do these metals come from? How many am I being exposed to? These are all important questions—some of them with surprising answers—so we boiled it down to the essentials so you can get the info you need.

What is a heavy metal?

There’s no strict definition for a heavy metal, but they’re generally considered to be high density, literally heavy metals, as in those elements in the metals section of the periodic table of elements. Some people also define heavy metals as those that are toxic, though some are biologically necessary in small quantities yet dangerous in large ones.

Either way, the list of heavy metals generally includes arsenic, lead, cadmium, mercury, chromium, copper, zinc, nickel, selenium, silver, antimony, manganese, and several others. The Food & Drug Administration only has specific safety levels for a few of these—cadmium, lead, arsenic, and mercury—because those are the elements within this category that most commonly make their way into the food supply. The Environmental Protection Agency also monitors heavy metals, since they’re environmental contaminants. But all this being said, there’s no one definition of “heavy metal” and they’re not all equally dangerous. Generally, health experts agree that the most worrying members of this category, are arsenic, cadmium, chromium, lead, and mercury.

Why are heavy metals dangerous?

The short answer is that heavy metals react with your cellular machinery in ways that are often problematic. Small amounts can get filtered out with your urine, but heavy metals mostly stick around in various tissues, as well as in your bones and blood, so taking in too much can cause the metals to accumulate—that’s when you run into problems.

For some, reaching a dangerous level is tough. Heavy metals like iron and zinc, are not just useful but essential for your body to function. Iron allows your red blood cells to bind oxygen molecules. Various enzymes in your body require zinc in order to work properly. Too much of either would result in similar symptoms to other heavy metal poisonings, we just don’t commonly get exposed to dangerous levels so you don’t hear about them when we talk about heavy metal poisoning.

Other metals, like copper, are both necessary and alarming. You need trace amounts to help enzymatic reactions inside your cells, but you can get copper poisoning if your drinking water is contaminated (the EPA considers anything over 1.3 milligrams per liter to be too much). The same reactivity that allows it to feed reactions also causes it to produce free radicals, which can damage DNA and other cellular components.

Many of the heavy metals you hear about, though, fall into a third category: safe in small quantities, but mostly just dangerous. Arsenic, for instance, is virtually everywhere, so it’d be close to impossible to avoid it entirely. But in larger than trace quantities, it’s a huge problem. It inhibits a wide variety of enzymes, and arsenic poisoning manifests as a host of upsetting symptoms including seizures, brain hemorrhages, vomiting, bloody diarrhea, anemia, muscle aches, and hardening of the skin.

Not all heavy metals give you quite this range of dire medical manifestations, but most of them will give you severe gastrointestinal and nervous systems problems. We’re not even sure precisely how most of the heavy metals damage the human body, but the common thread is that they interrupt enzymes and interact with DNA in such a way that basic cellular processes shut down.

Lead is the main exception to the rule, it primarily exerts its influence on the human body thanks to its molecular mimicry of calcium (though it also interferes with enzymes.) Your nerves rely on calcium to send signals to each other. All the protein channels and enzymes that use calcium to open or close get confused by lead, prompting them to malfunction as the metal accumulates. Researchers aren’t sure of all the mechanisms by which this interference causes problems, but the end result is a variety of neurological issues. Symptoms can take time to show up, but chronic ingestion causes confusion, headaches, seizures, and in the long-term prevents neurological development, making it particularly worrying for young children whose brains and bodies are still developing.

How much is too much?

It’s surprisingly hard to track down specific numbers on precisely how much of any given heavy metal is problematic. In part, that’s because experts have a hard time agreeing on what qualifies as a safe quantity for theses elements. Consumer Reports points out in some cases there have been recommendations to change the “safe” amount that haven’t been confirmed yet. The EPA considers arsenic levels to be acceptable at 10 parts per billion in drinking water, while the FDA has considered lowering that in food to 100 parts per billion. The FDA says that mercury is dangerous at 1 part per million.

Even if you had a complete list of the dangerous levels, though, you’d need to know how much is actually in your food. The FDA regularly tests various food products and publishes those results as part of the Total Diet Study. You can check out the full results, but it’s all averages. It’s a useful resource, but still can’t tell you whether a particular brand is more risky, and the FDA isn’t able to test all food products on the market.

The safest bet is simply to minimize your exposure. As the director of food safety research at Consumer Reports notes, “no amount of heavy metals such as lead can be considered safe.”

What can I do to decrease my exposure?

Since you’re not going to be able to test all of your food for heavy metals before every meal, the best and easiest way to minimize heavy metal exposure is to avoid those products known to have high levels of those substances. The biggest one? Rice. Rice readily absorbs arsenic from the soil and water, and though as an adult you’re certainly not eating enough pure rice for it to be a problem, babies shouldn’t have many rice-based snacks. And if you are concerned about your own diet, Consumer Reports suggests opting for white basmati rice from California, India, or Pakistan or choosing brown rice—all of these had much lower levels of arsenic than rice from other places in the world.

You can also avoid consuming protein powder and steer clear of high-mercury fish like bigeye tuna and swordfish. Packaged foods also tend to contain rice, since it’s a cheap and useful additive, so avoiding processed products will help. None of these is likely to cause a problem individually, but it can’t hurt to reduce your exposure. In doing so, you’ll also move towards a diet full of whole foods that are naturally low in heavy metals. Though many plants can absorb trace amounts of dangerous metals from the soil or from contaminated water, pretty much all fruits and veggies are very low in or entirely free from heavy metals. Dairy is also safe, as is most meat besides seafood.

Again, there’s no reason to be fearful. Heavy metals are dangerous, but it’s easy to reduce your exposure and you’re unlikely to be consuming high quantities already anyway.