Everything you ever wanted to know about your double chin

Submental fat is not your enemy. 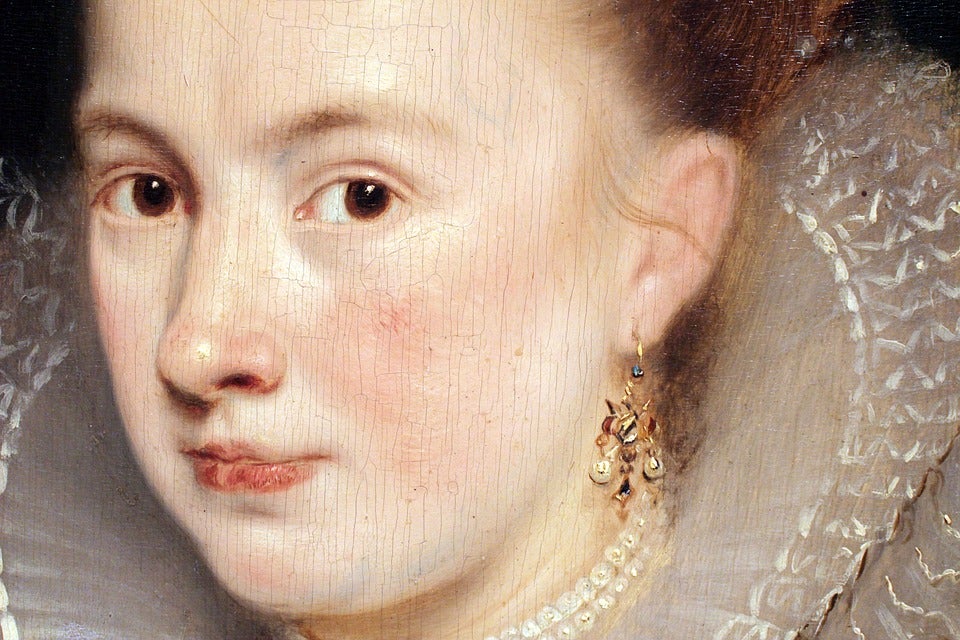 The camera pans down the staircase, gliding past sumptuous portraits of unnamed figures from history. A woman in an Elizabethan ruff gives us a flirtatious smile from her perch in an oil painting. An old man with a long, white beard looks down at us, eyes twinkling. But behind that big collar and navel-grazing beard, the figures conceal … their double chins.

Turns out, the video I’m watching is not the wholesome start of a sweeping Ken Burns documentary, but rather an ad for Kybella, an FDA-approved procedure aimed at eliminating one’s double chin. Known to doctors and anatomy nerds as “submental fat,” double chins are the result of extra tissue below your mentum, or lower jaw bone. The exact number of people in possession of a double chin is unknown, but the success of treatments like Kybella makes one thing clear: Those who have submental fat often want to rid themselves of this perfectly safe—and relatively common—facial feature.

Dr. Shayan Izaddoost of Baylor College of Medicine in Houston has spent years studying the omentum—and reshaping it for patients in his plastic surgery practice. He says the double chin is a catchall phrase for what’s actually more like three distinct subcategories of fat. Double chins, it turns out, can actually be the result of excess skin, excess fat, or a combination of the two. When patients come to him about their submental fat, the first thing Izaddoost does is try to determine which of the three buckets they fall into.

As humans age, our skin loses a lot of its natural elasticity. Like the elastic band in a favorite pair of sweatpants, we start out taught. But weight fluctuations, natural pulling and stretching, and the deterioration of facial cartilage, bones, and fat ultimately leave our skin slack. Smoking, sun exposure, and gravity don’t help, either. But sagging skin doesn’t disappear … it pools. And sometimes, it pools right beneath your chin. Younger people can develop double chins as well, even when their skin retains its natural buoyancy. In these cases (or cases of double chins caused by a combination of loose skin and submental fat), Izaddoost says the most likely culprits are weight or genetics.

No one’s body fat is distributed quite the same way, but by and large, if you have a heavier frame, you probably have a larger face. That’s why, for people who have a true submental fat deposit and not just extra skin, Izaddoost recommends diet and exercise as an non-invasive way to reduce a double chin. The theory is that if your overall body mass index declines, some of it will come from that little pocket just below your jaw. While this works for many people, genetics also appear to play a pesky role in double chin development.

No researcher has ever identified the individual DNA sequences that give people a plumper submental region, according to Izaddoost. At least not yet. But he says the evidence suggests that double chins really are more common in families, suggesting some hereditary component. That means that, even if a person diets and exercises, they may never successfully change this facet of their facial shape. Conversely, a person who never diets or exercises might avoid developing one in the first place if they’ve got certain genes.

While much about the origins of the double chin remain deep inside our double helixes, doctors are certain that a double chin poses no danger to a person’s health. It doesn’t indicate “bad” genes, underlying illness, or much of anything for that matter. It’s just a little extra mutton in your chops. Still, Izaddoost says, many people would quickly spend one genie’s wish to rid themselves of their double chin forever. “Anything that happens with your face is important to people. When you have a double chin … people perceive that [others] are staring at that or looking at that or feel it’s outside the normal of human shape or form,” he says. “Of course, it’s not. But I think people perceive that others see that part, that imperfection.”

For those pursuing presumed perfection, modern medicine offers a host of admittedly imperfect interventions. Many people have relied on liposuction or other surgical procedures to eliminate their double trouble. But increasingly, Americans are turning to chemical therapies like Kybella. Approved in 2015 as a non-surgical alternative for submental fat elimination, the serum is comprised of deoxycholic acid, a chemical that quite literally eats fat for breakfast.

In an article for The Atlantic in June, Lindsey Hunter Lopez described her own experience with Kybella. On her first visit, she had three vials of the drug injected just below her jaw with a needle. Six weeks later, she returned for a second round. In between, the bile acid dissolved the fat cells in her chin, which her body slowly excreted as waste. She suffered some pain, swelling, and bruising, and ponied up somewhere between $800 to $1,400 for each treatment. But for Hunter Lopez and many other Kybella fans, the mild suffering was well worth the final result. In fact, some people are hoping similar treatments will be made available for other parts of the body, like around your bra strap or above your knee. However, development on new fat-busting fronts could be slow, because the bigger the area you expose to fat-eating chemicals, the more likely you are to create (rather than eliminate) dimpled skin and uneven fat deposits.

Not everyone has the money or motivation to deal with something as medically inconsequential as a double chin. Those individuals might be better served by cardiovascular exercise, a more balanced diet, targeted chin exercises, or a cute headscarf or bespoke beard. If you ask me though, the best choice is proudly displaying your pleasantly plump chinny chin chin.