We asked experts what you should eat to get those sweet gains. 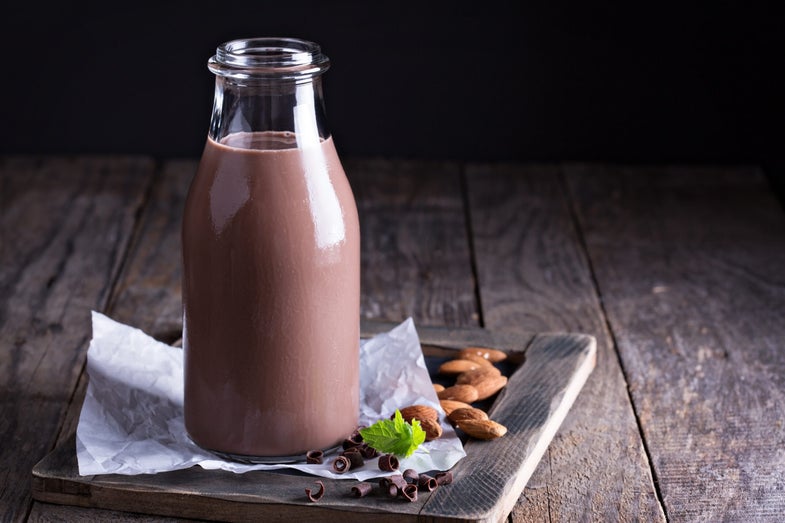 Not a bad blend of the necessary nutrients, but you can probably do better. DepositPhotos
SHARE

In a post-workout haze, it can be hard to come up with a good snack. That means if you want to refuel properly, you’ll want to prepare in advance. And that means you’ll need to figure out a snack before you even start your workout. And who has time for that?

Luckily for you, it’s actually not that complicated. But to understand what your body needs post-workout, we need to first talk about what workouts do to you.

Whether you’re running or lifting weights (or anything in between) your body is essentially using its glycogen stores to fuel your exertions. Glycogen is the stored form of glucose, which is the main molecule that your cells break down in order to produce energy. Most of your glycogen hangs out in your liver and skeletal muscles. When you deplete it, you hit what athletes generally call “fatigue”—you’ve run out of your most immediate, convenient form of energy, which makes you feel physically exhausted (because you quite literally are).

People who can store more glycogen in their muscles can exercise for longer, and you can increase that capacity through training. You can also, to some extent, provide your body with carbohydrates in advance to provide a source of energy other than glycogen, but it’s a tricky balance between supplying a bit of extra fuel and diverting precious resources toward your digestive tract. “You want your body’s blood flow to be going to your muscles, not your digestive tract during your workout,” explains Jessi Haggerty, a registered dietician and trainer in Somerville, MA. That’s why pre-workout snacks full of fiber and fat generally aren’t helpful: they take a long time to digest.

After you exercise, your body starts replenishing its glycogen stores and repairing or building new muscle, depending on how strenuously you worked them. This is what the post-workout snack is supposed to help with—pack the glycogen back in and build back muscle. That means you need two basic components: carbohydrates and protein. The latter is more important if you’re performing resistance exercise.

This is why chocolate milk gained a reputation as a cheap alternative to expensive protein drinks for athletes, especially weightlifters. It has plenty of carbs, both in the milk (lactose is a sugar) and in the chocolate syrup or mix you add in, plus it has protein from the dairy. It’s not necessarily the best possible snack, but it’s got a good balance of the stuff you need (and it tastes good).

“A fast-acting protein works best, however for the recreational athlete and competitive as well, chocolate milk may be fine. You just need to drink a bit more to get the same protein content,” says Jay Hoffman, a professor in the Sport and Exercise Science program at University of Central Florida. Plus, he explains, the combination of the ingredients can have a cooperative effect. “The chocolate content will active insulin which will increase amino acid and glucose uptake, [which is] important for enhancing recovery from exercise.”

That’s not to say that everyone recommends chocolate milk specifically. “I personally wouldn’t recommend chocolate milk because it tends to contain refined sugar with an inadequate amount of protein. However, some people prefer it because it does contain both carbs and protein,” says Nora Minno, a registered dietician and trainer in New York City. She says that it is true that studies show dairy proteins might be especially helpful for workout recovery because they have plenty of leucine, one of the essential amino acids involved in creating new proteins, and because of the way our bodies absorb the other amino acids in fluid-based dairy foods. It seems to work better than soy-based proteins, for instance, as well as better than general carbohydrate options. As Hoffman points out, research suggests that this is because of the whey protein in milk, which our bodies absorb quickly.

A few studies have actually tested whether chocolate milk is a good recovery snack. One from 2013 said it was “optimal for exercise recovery and may attenuate indices of muscle damage.” Another from 2006, which compared chocolate milk to simple fluid recovery versus another carbohydrate-based drink found that chocolate milk helped athletes replenish their energy faster than the other carb option, though the fluid recovery worked just as well.

The key, really, is the carb-protein combo—and that you consume the snack somewhere between zero and two hours post-workout. Some studies suggest sooner, as in within 30 minutes, may be better, but there’s no conclusive answer.

As for how much, the International Society for Sports Nutrition recommends keeping the ratio around 3:1 or 4:1 carbohydrates-to-protein. Incidentally, and though it depends on the kind of milk you use and the amount of syrup added, this is about the ratio inside chocolate milk: roughly 8 grams protein plus 24 grams carbohydrates. But it doesn’t have to be chocolate milk, especially if you’re vegan or hate chocolate. Minno says the general rule of thumb is around 1 to 1.5 grams of carbohydrates per kilogram of bodyweight. You should also keep the protein limited to around 20 grams, perhaps slightly more or less depending on your bodyweight, because you simply can’t absorb and make use of much more than that.

If all those numbers are intimidating, try figuring out several snack options in advance so you know what works and won’t have to be googling for nutritional information after a long run. Here are some ideas to get you started:

Whatever you like and decide on, make a habit of eating something you know has the right fuel to resupply your muscles. Make it easy on yourself, and enjoy the results.