Like the Apple Watch, it keeps an eye out for spills. 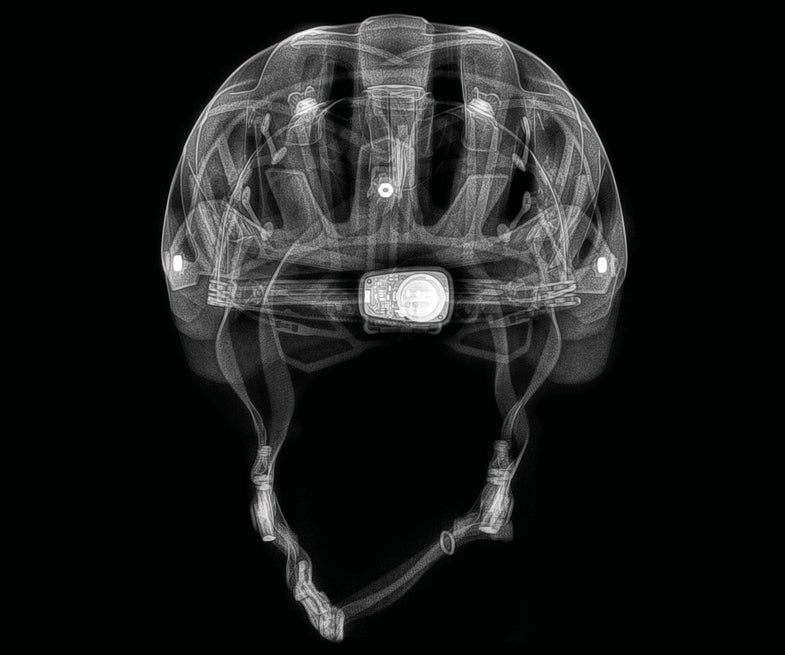 There are plenty of ways to fall off a bicycle. Here’s one scenario: a city rider hits an open car door and goes flying. Another? A mountain biker bumps into a rock at a bad angle, wipes out, and smashes their noggin on the trail. While these types of crashes are different, they share a stark similarity: both have the potential to knock you unconscious, or even kill you.

It’s accidents like these that a new sensor system from bike company Specialized is designed to detect. The gadget is roughly 1 by 1.5 inches in size, weighs less than an ounce, and attaches to the back of the helmet. If the onboard accelerometer and gyroscope detect a fall—maybe the whiplash of that car door impact, or the linear and rotational forces of a head strike on the ground—it uses its Bluetooth connection to your smartphone to initiate an alarm. If you don’t respond in time, it can email and text your emergency contacts, and will even give them a link to the location where you might be on the ground. Then, it’s up to those recipients to do something with that information.

“Hopefully they like you enough to take action on your behalf,” says Chris Zenthoefer, head of Specialized digital.

The sensor system, called ANGI, is in line with a larger trend: tech that watches out for you, and can take action for you if needed. A clear cousin of the helmet sensor is the latest Apple Watch, which packs in a “fall detection” feature. That wearable device also uses its onboard accelerometer and gyroscope, and the software is designed to notice if someone falls and becomes unresponsive while walking around their home, for example. Rather than just informing your emergency contacts, the Apple Watch goes one step further and contacts emergency services directly.

In both cases, the idea is that the technology is passive until you need it. With the Specialized helmet sensor, Zenthoefer says they wanted to make it simple to use. Safety is something of a “taboo subject in cycling,” he says, as people don’t want to think about the idea of being slammed by a car, or wiping out hard in the mountains. “The goal is to set up a lot of automated safety systems, so the rider doesn’t really have to think about it.” After all, if a safety feature is too annoying to engage—or worse, produces false positives too frequently—people just won’t use them.

The Specialized system is designed to capture three kinds of events that can happen to a cyclist’s head: one is a straightforward, linear impact—to imagine that type of force, picture an object dropped straight down on a helmet, as unlikely as that sounds. The second is a more common kind of impact, involving linear forces as well as rotational ones when you hit your head after falling off your bike—an issue that a helmet technology called MIPS is designed to mitigate. And the third is the whiplash of a crash where the head doesn’t even hit the ground.

While Apple designed the fall detection feature for its watches by gathering data from actual tumbles that happened to people who had the wearable on their wrists, Specialized developed the ANGI tech in a laboratory setting. Later, the bike company used field testers on cycles to ensure the system didn’t have false positives—they didn’t want the system to think a fall had happened when one hadn’t.

Garmin also offers a crash detection feature not on a helmet, but on some of their cycling computers, like the Edge 520. They call it “incident detection” and the sensor powering it is an accelerometer that can notice a change in speed.

The Specialized sensor comes on helmets from the bike company, and the companion app for the smartphone requires a $30 subscription after the first year; to engage the safety feature, a cyclist does have to fire up their smartphone app before the ride to let it know to keep an eye on them. Now if only people in parked cars would keep an eye out for cyclists before opening their doors.