See the unsung heroes of the sea. 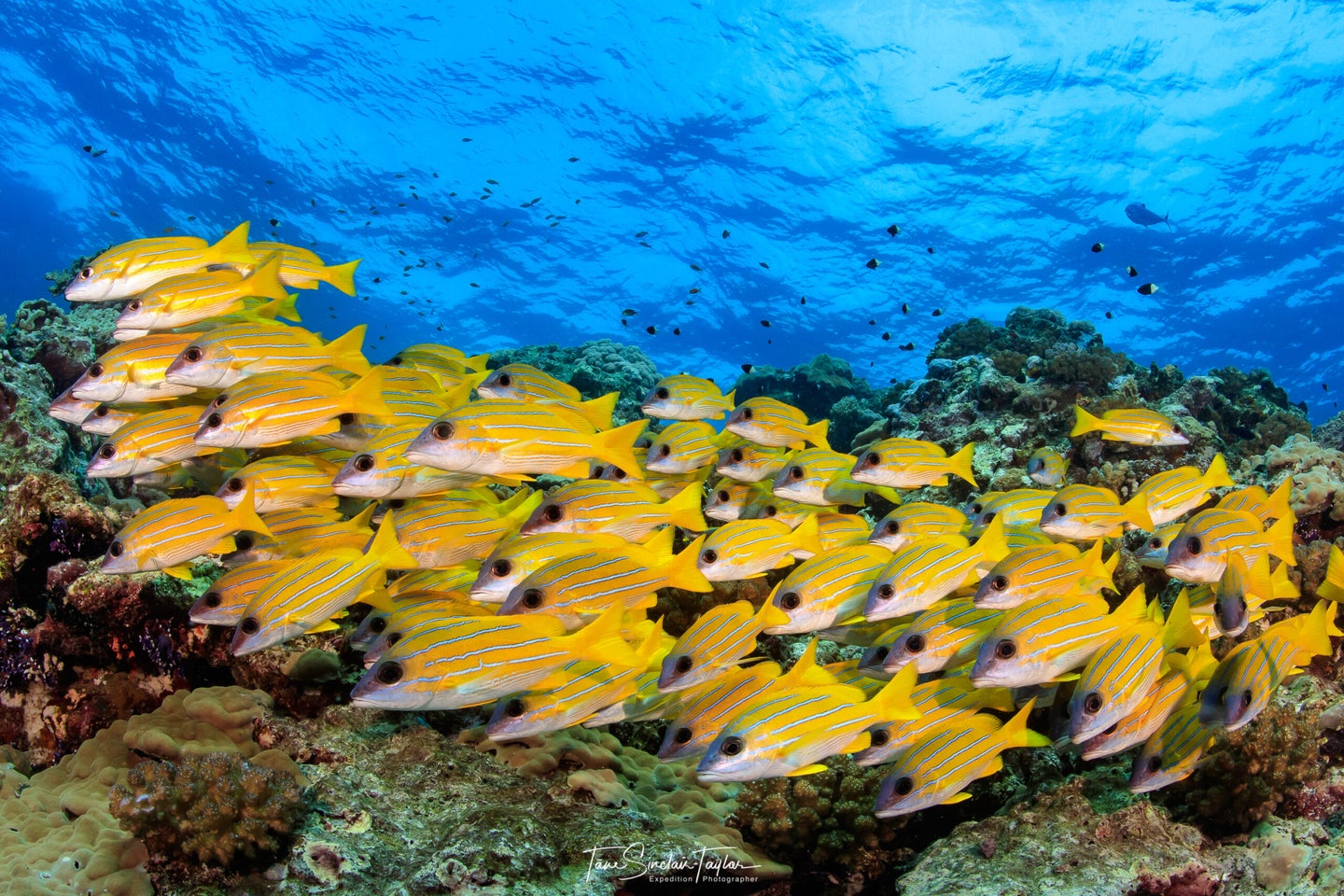 For nearly two centuries, scientists have pondered “Darwin’s Paradox,” the enduring mystery of why coral reefs thrive in tropical waters, which are woefully short on nutrients. Reefs are teeming oases in aquatic wastelands, and researchers have puzzled endlessly over how they flourish. One answer may come from the thousands of species of tiny colorful fish, rarely longer than an inch, that serve themselves up as a never-ending feast for bigger fish. They’re called “cryptobenthic” fishes because they live on the seabed floor and often hide in crevices in coral reefs — ”crypto” coming form the Greek word for “hidden.” They reproduce quickly and die young, gobbled up like candy during their first few weeks of life. “It’s like putting a jar of gummy fish in the office lunchroom, a large quantity of colorful little morsels that almost everybody will take a handful of on the go,” said Simon Brandl, a postdoctoral fellow at Simon Fraser University in British Columbia. He, along with biology professor Isabelle Côté, studied the behavior of these tiny fishes and published the findings in the journal Science. “I can’t speak to whether our tiny fish come in different flavors —you would have to ask the bigger fish — but the key here is that because of their unique way of life, this jar basically replenishes constantly,” he added.

Brandl and his colleagues were curious as to how the reefs could survive and flourish in oceans that were so stark and barren. “Some of us have suspected for a while that these fishes are important, but we were lacking a few key pieces to patch the whole story together,” he said. “When I combed through decades’ worth of old data on larval communities around coral reefs, I found that these tiny fish absolutely dominate these assemblages. This meant we were finally able to describe the mechanism of how these fishes contribute to reefs.”

The researchers hope that a better understanding of these fish —and how they contribute to reef survival —could help protect the health of corals from the continuing ravages of climate change. Emissions from fossil fuels not only are heating up the planet, but are warming up ocean waters and making them more acidic.

“Knowing what we know now certainly helps,” Brandl said. “On one hand, knowing that a major process on coral reefs that is critical for humans - that is, the production of large fish biomass - is driven by a group of tiny and extremely diverse animals that are not targeted by fisheries is really important.” In fact, these small creatures account for 57 percent of the food consumed by larger fish who, in turn, are later consumed by millions of humans, according to the study. “It means we can work towards maintaining this process,” he said.

On the other hand, he is concerned that rising water temperatures will hurt the tiny fishes. “I have worries that climate change isn’t going to bode well for these little beasts,” he said. “There is strong evidence that suggests that the first corals to go down in the climate crisis will be complex, branching corals that ultimately provide all of the nooks and crannies that these tiny fish need to hide. When these little nooks and crannies are lost, then the fate of these tiny fish is all but uncertain, which is quite worrisome… However, this could give us a direct avenue for protecting reef fish. If we can ensure that this small-scale complexity remains intact, we may be able to keep the process alive.”

There were three parts to the study. The first involved collecting the small fish from coral reefs in the wild. “To do this, we use an anesthetic solution made from clove oil, which puts fish to sleep,” Brandl explained. “Once they’re knocked out, we can collect them with tweezers, which can be quite a challenging and delicate process when there’s a bit of wave action. We then put them in a zip lock bag and bring them to the surface to identify, weigh, and measure them in the laboratory. This gave us the numbers for adult fishes on reefs.”

They then synthesized five decades’ worth of data about larval communities to better grasp the extent to which these fish reproduce. They found an explosion of tiny fish larvae near the reefs —avoiding the dangers of the open ocean — which explains their survival, he said. “From there, we were able to link the two together in the third part, which was a theoretical population model that allowed us to detect this conveyor belt of tiny fish that fuels larger fish on reefs,” he said.

They aren’t the first to study these fish. Earlier researchers spent years trying to categorize them. “For all we know, there may be more than 3,500 or 4,000 different species,” Brandl said. “But I believe we’re the first ones to actually link these fishes to what happens on coral reef ecosystems more broadly. When we see coral reefs, we mostly notice two groups: corals and large fishes. But the reality is that there’s so much more to reefs that we can’t immediately see, like these tiny fish.”

Sadly, because of their size, most humans likely will never see them, he added. “To the naked eye of a human snorkeling or diving on a reef, the majority of these fishes will be tiny, barely-perceptible flashes of red, yellow, white, pink or orange that do their best to skedaddle to safety,” Brandl said. “This is one of the main reasons why we have ignored them for so long — they are somewhat outside our range of perception for beauty, simply because they are so tiny. But if you were to blow them up to 20 times their normal size, they would be some of the most gorgeous fish on the reef.”

Their study offers new evidence to describe how reefs can persist in a hostile environment. “I would not say that these tiny fishes are the only reason — they’re certainly not,” Brandl said. “But they are another one of these quirks of coral reefs that probably help them be these wonderful oases of life in mostly food-deprived waters.”

Brandl and his colleagues hope their research will prompt more conservation efforts to prevent the reefs’ further decline. “While I spend a lot of time on coral reefs for work, I never fail to marvel at their incredible beauty,” he said. “They are like underwater cathedrals, made entirely from living organisms, and they create what is perhaps one of the most complex ecosystems in the world. In my opinion, coral reefs are one of the most stunning wonders of nature and their current demise is heartbreaking to anybody who has spent time looking at them.”