Google Pixel Buds review: The best wireless headphones I’ve ever wanted to throw in the river

A great pair of headphones that can be a nightmare to use. 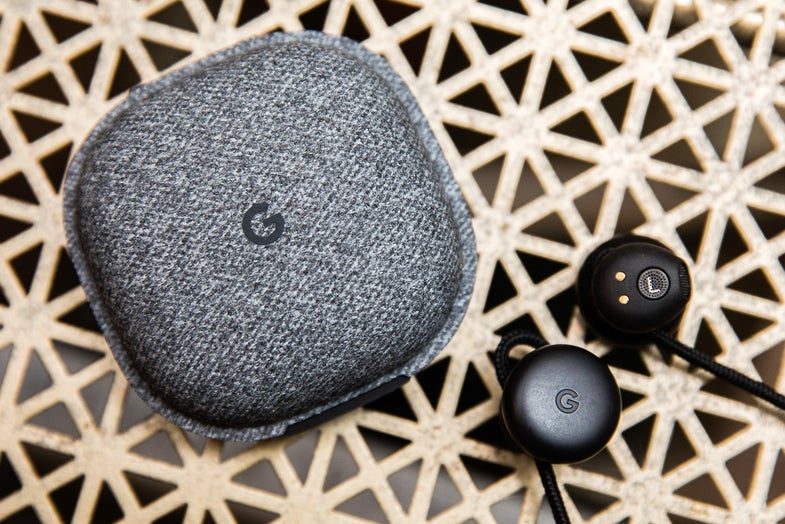 This story has been updated. It was originally published on November 17, 2017.

I’m OK with the idea of headphones jacks going away on smartphones. It’s not ideal, but it’s clearly the future and the sooner everyone embraces wireless Bluetooth headphones—or slides sadly into a life dependent on dongles—the smoother the transition will go. Buttons, however, still have a place on gadgets, despite manufacturers’ quests to turn everything to touch. In fact, if Google’s new Pixel Buds headphones had a button or two, I may not have had moments where I wanted to ball them up and throw them into the murky depths of the East River.

What are Google Pixel Buds?

The Google Pixel Buds are Google’s first pair of wireless headphones. They connect to an audio source via Bluetooth, but there is a rope-like cord that tethers the buds to each other. They’re designed as a companion piece to the new Pixel 2 and Pixel 2 XL smartphones, both of which were announced as part of a barrage of new hardware earlier this year at Google’s I/O developers’ conference.

You control the Pixel Buds with a series of touch-based gestures achieved by poking around at the outside surface of the right bud. Since there are no buttons to be found, the experience starts getting wonky.

How to set up these wireless headphones

I started my test by pairing the Pixel Buds to a Pixel 2 device, just as Google intended. The Google Pixel headphones have something called Quick Pair and locked onto the device with no problem. But, like most other gadget-using people, I get audio from more than one device over the course of the day. There’s no pairing button on the headphones themselves, so I had to Google how to get them paired with another device. They need to be cradled in their charging case, which has a button that can engage pairing mode. It’s an inconvenient process, especially when you have to dig the charging case out of your bag on a crowded train like I did to get it done.

Once paired, everything depends on touch-based gestures. Swiping forward increases the volume, while swiping backwards reduces it. Tapping the surface plays and pauses, while holding your finger on it summons the Google Assistant. The whole thing feels imprecise–it takes some trial and error to find out what counts as a swipe, a tap, or a hold. There were a lot of false starts that felt avoidable.

Every time I would readjust the wireless Bluetooth earbuds in ear, the sensitive touch surface would register a tap. Several times the buds fell out of my ears, and catching them caused a chaotic mix of assistant summoning and music flickering.Paired with the iPhone 8 Plus, the problem is even worse, with more unwanted Siri encounters than I can count.

Almost all of this could be solved with the addition of a button—or maybe even two.

Buttons have downsides, like moving parts that break down over time, but the extra-sensitive —dare I say, “touchy”?—nature of trying to control these things gets out of hand. A button to summon the assistant or pause the music would cut down almost all of the false activations. A button would also let you turn the darn things on and off in a reasonable way, too.

The only way to truly turn the Google Pixel Buds off is to once again cram them into the charging case, which doesn’t fit my typical practice of hastily cramming my headphones in my pocket. It’s nice that they connect quickly, but getting them to stop taking over your sound is a chore. I also accidentally hit them at least a few times while they were sitting on my desk and started the audio. Not very professional.

Underneath these annoyances, there’s actually a lot to like about the Google Pixel Buds. The cord that holds the buds together also creates loops that holds them in your ear. Slide it out for a bigger loop, or in for smaller ears. Sure, it means cleaning a little earwax off the cord every once in awhile, but it’s comfortable and infinitely adjustable, unlike others that come with three or four different sizes of spacers.The downside, however, is that the cord can slip after a while, but this didn’t really happen much during testing.

There are no interchangeable tips over the bits that actual pump out the sound, either, so you can’t lose one on the road and get stranded with only one ear worth of audio.

Sound performance is solid, too, especially compared to something like Apple’s AirPods. The Google Pixel Buds don’t have active noise cancelling, and the lack of foam tips means you won’t get total isolation, but the bass is ample and the highs cut nicely through the mix. The mids sound a little thin to my ear, but I have also been using a lot of over-the-ear models lately, which have me spoiled.

The Bluetooth headphone connection is extremely consistent on every device I tried, and the battery life is average, at around four hours per charge.

The translation feature is impressive, offering almost real-time conversations with people without a common tongue. I didn’t get to travel abroad with them, but I did try short conversations in both German and Spanish with neighbors and you really can make basic conversation work in a pinch. Of course, this isn’t a totally new concept, and other wireless headphones like the slightly cheaper Bragi Dash have already started in this space. Also, it’s only available to users with Pixel 2 smartphones. Bummer.

That rest of the not-so-good

It took me an embarrassingly long time to get the Google Pixel Buds wrapped back up into the container as Google intended. Maybe one out of every four times, the cord wasn’t wrapped quite tightly enough and it would get trapped in the mouth of the clamshell case. As a person who typically just crams headphones into a pocket or a little baggie as companies often provide, this drove me crazy.

So, who should buy Google Pixel Buds?

At $159, the Google Pixel Buds true wireless earbuds face stiff competition from other headphones like the Jaybird Freedom and much cheaper options like those from Plantronics. If you own a Pixel 2 and you want to get the most out of the Google Assistant, you’ll probably appreciate the added features if you can get used to the interface. Also, if you like interacting with the Google Assistant instead of pulling your phone out of your pocket to accomplish common tasks, you’ll get more value out of your purchase.

Ultimately, it seems like Google’s effort to simplify the wireless earbuds experience made the whole thing a lot more complicated. A one-page instruction booklet is great, but it sure loses its shine if I have to spend time Googling how to do typical functions. And while buttons will likely continue their decline in the consumer electronics world, this is a good example of how they can still make life a lot easier when touch isn’t a perfect solution.