This budget camera has strong specs, but needs some TLC. 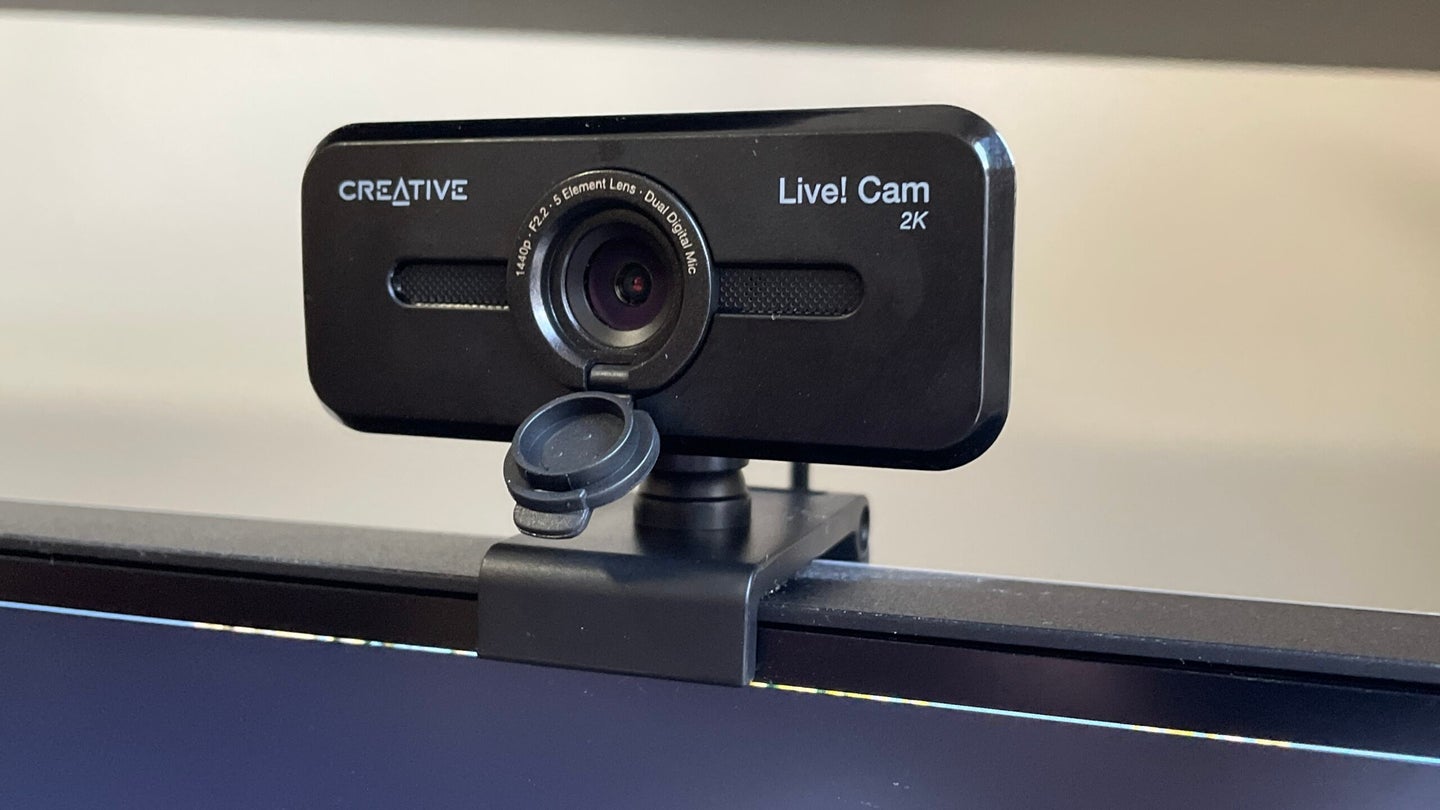 In my mind, the world of webcams is fairly static. Most models, at least the best ones, cost between $100-$300. The less expensive ones offer 1080p resolution at 30-60 frames per second, which is as good as most video call platforms can handle. The more expensive ones can go up to 1440p or even 4K. Despite the growing need for everyone to have a webcam, there hasn’t been a surge of affordable options elevating the quality of camera you can to your desktop for less than $100. Creative Labs’ newest webcam, the Live! Cam V3, shows that it is definitely possible to elevate the budget webcam, but also highlights the challenges of doing so.

On paper, the 1440p webcam looks like a higher-quality camera than many of our favorite webcams at just $50, or literally half the price. Despite the resolution bump, the image quality you’ll likely achieve with the Live! Cam Sync V3 out of the box falls well short of more expensive cameras. It produces a darker, warmer image, and lacks a strong configuration app to let you fine-tune your settings in real-time. However, if you’re willing to work at it (and maybe buy a key light), the Creative Live! Cam Sync V3 gives you more to work with than many budget webcams.

What is the Creative Live! Cam Sync V3 webcam?

We have to start by talking about money. The most important thing to keep in mind when looking at the Creative Live! Cam Sync V3 is its price. At $49.99, it costs roughly half as much as most of Logitech’s webcam did at launch. It is, at least by our standards, a “cheap webcam,” and that categorization is important because there is a very deep divide between the webcams that cost more or less than $100 (or did when they first launched).

The Cam Sync V3 is a 5MP webcam that can shoot photos and video at up to 2560 x 1440 pixels, more commonly known as 1440p. (Creative calls it “2K,” but 1440p is the more common term; it’s also sometimes called “Quad HD” or “QHD.”) The frame rate is limited to 30 frames per second at any resolution, though that’s not a huge loss. Most webcams limit their framerate to 30fps at their highest settings.

It also boasts an extremely wide field of view, up to 95 degrees, which means it naturally captures a lot of your surroundings. Sitting at my desk, the Cam Sync V3 captures most of my office, rather than simply my head and shoulders. That can be very helpful if you need a webcam for a classroom, or conference room, or simply want to get a few people in your shot. When you want to tighten the picture for a standard video call, you can tap a button on the webcam for 2X, 3X, and 4X digital zoom. You can also adjust the position quite a bit: The standard, tripod-mountable monitor clip stand has a joint that rotates 360 degrees horizontally and provides plenty of vertical tilt.

The Cam Sync V3 is fully equipped for video calls, which means it comes with a built-in microphone as well. More specifically, it features a dual, omnidirectional mic array, which also works great for recording groups or people who plan to stand off-center. I found the mic quality was fine—neither exceptional nor particularly problematic. That’s par for the course with most webcams: great for casual calls, but you’d never want to use one to record a podcast or make a video.

Last, but not least, it features a built-in privacy shutter, so you can cover the lens when you aren’t using the camera. This paints a very promising picture at any price, but especially when we’re talking about $50.

Despite the specs, the picture quality you get out of the Cam Sync V3 is very inconsistent. Depending on what app you use, it may vary greatly. For example, when trying it out with the Windows Camera app, my whole room looked extremely orange, even when I switched to using cooler light sources with more blue light. (I happen to have an overhead light and key light with “cool” and “warm” settings.) In Google Meet, the image was more malleable but also defaulted to an oddly warm picture. Finally, moving into Open Broadcaster Software (OBS), I was able to fine-tune my settings to the point where the picture looked bright and neutral.

In all of the software I tried, I found the camera captured much less light than my Logitech C922 Pro, so my room looked much darker and created deeper shadows on my face. The difference was large enough that I ended up using a small key light to brighten up my face when taking video calls, which I don’t have to do with a more expensive webcam.

Once I found a piece of software that let me fine-tune my picture and then spent a few minutes dialing in how my picture looked, I was very happy with the picture I got with the Cam Sync V3. It’s sharp and clear without any graininess or digital fuzz, even at the higher zoom levels. Of course, using OBS—a program most commonly used for recording Twitch streams and YouTube videos—for work calls is a comparatively extreme measure that I don’t expect too many people will want to take. And, no matter what you do, you will likely need to spend more time thinking about how your room is lit than with more expensive webcams.

The real problem is the software

Technically, Creative does offer a configuration app, called the Creative app, which allows you to adjust many of the core picture and sound settings. It also offers some basic AI-assisted ambient noise cleanup for the microphone. Unfortunately, the app doesn’t allow you to test your adjustments with a real-time image, so it can be very hard to use. Meanwhile, companies like Logitech not only make it easy to configure your picture quickly, but their software includes tools for enhancing your image or customizing it with custom backgrounds. For most people, who aren’t looking to build a camera setting for everyday video calls, you’re effectively restricted to the most basic functionality.

So, who should buy the Creative Live! Cam Sync V3 webcam?

The Creative Live! Cam Sync V3 is a great option for people with more time than money. You can get a great, high-quality photo or video image out of it if you’re willing to put in some time to find the right setting and make sure your room is properly lit. For many people, particularly those who use their webcam for work, this will probably be too big a barrier. The difference between a camera that requires a real setup and a true set-it-and-forget-it option is less than $100, so we’d recommend most people spend a little more and save a little time. If you want to save a few bucks and/or enjoy spending time tinkering, though, it may be a hidden gem.