Anyone can be a streamer. Here’s how to start. 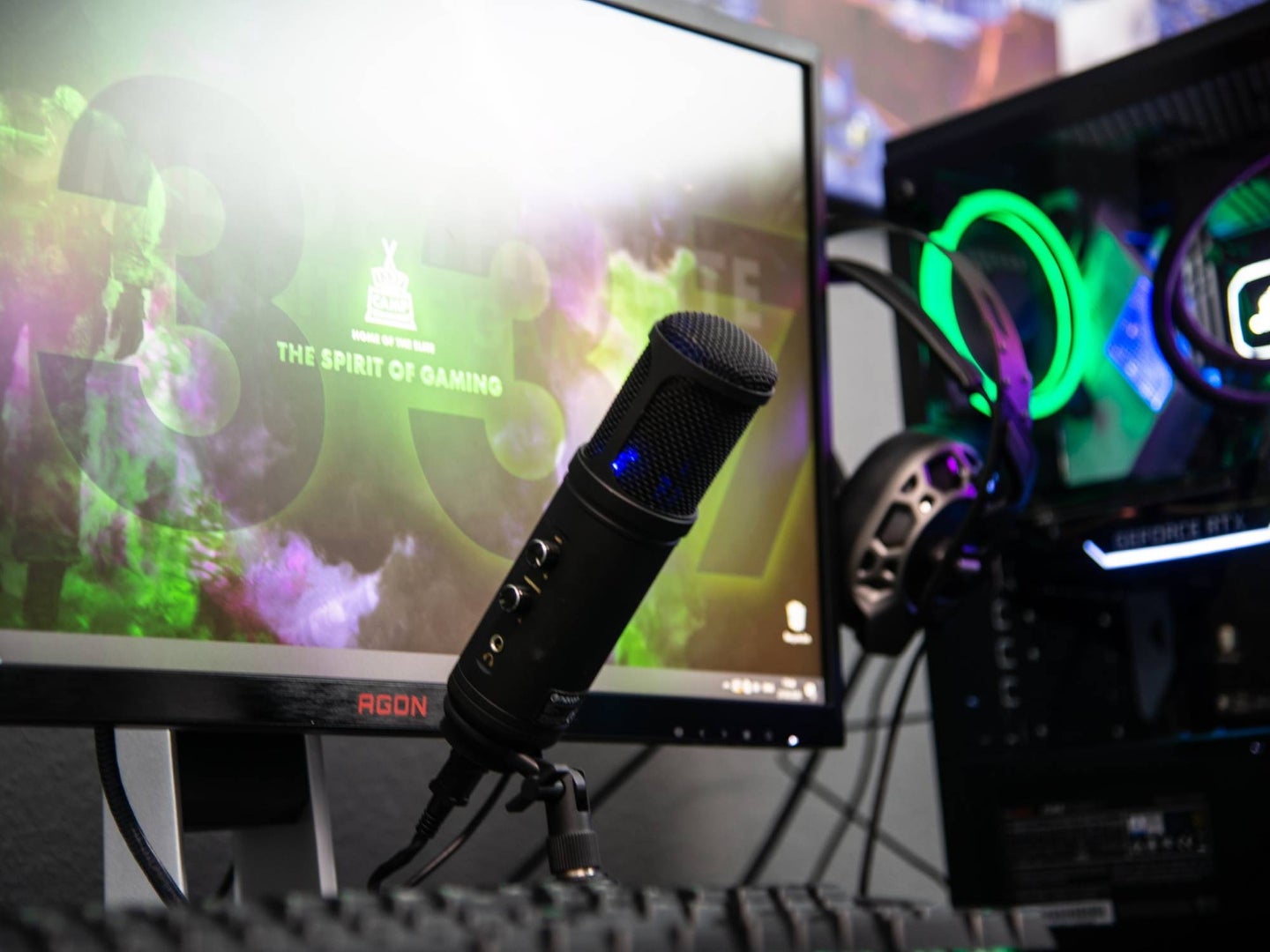 Every month, 8 million people go live on Twitch, broadcasting their passions and talents to the entire world. And at any given moment, there are 2.5 million people on the platform watching content including video games, music, cooking, and art.

If you’re one of those viewers, you’ve probably wondered about putting yourself out there and becoming a streamer yourself. You definitely can, but there are some things you need to know first.

You can’t become a streamer without gear. Different types of streams call for different setups, but if you just want to try your hand at streaming before spending your hard-earned cash, you can go for the most basic setup of them all: a computer.

Depending on the amount of RAM in your machine, you should be able to run streaming software (OBS Studio is free and the most popular) and a video game of your choice. Keep in mind that more basic computers with 6GB or 8GB of RAM may struggle to stream more resource-intensive games that require more processing power. Your computer is arguably the most important part of your setup, so if you find your machine is responsible for any lag in your game or stream, upgrade it before you do anything else.

If buying a new computer is not an option and you have an old, but still-functioning laptop lying around, you can use your most powerful machine solely for gaming and the other for streaming. Dual computer setups are slightly more complicated than running everything off a single machine, so you’ll need a capture card to bridge the gap between the devices. You’ll also need to buy one if you’re streaming console gameplay or using anything other than a webcam for your video feed.

When you’ve got the proper processing power, you’ll be ready to step things up. If you want people to see and hear you while you’re streaming, you’ll need a camera and a microphone. But if you have a working smartphone, long-time streamer and pro-gamer Tyler Blevins, better known as Ninja, says you already have all you need.

“You can use your phone as your camera and simply buy a mount for as little as $8,” he says in his MasterClass, How to become a streamer.

From there, you can build a setup as intricate as your budget will allow. It’s a good idea to start with a proper microphone, as streamers agree faulty audio is a bigger deal-breaker for viewers than a subpar video stream. After that, upgrade your camera and invest in better lighting if you haven’t already done so. These elements are especially important if you’ll be streaming something other than video games—like cooking or art.

Finally, pay close attention to your internet connection speed. Good streaming quality requires a high upload speed, as opposed to a fast download speed, which is better for, say, a smooth Netflix experience. The bare minimum amount of bitrate you’ll need to stream is 5 megabytes per second, says Ninja, and anything above 10Mbps will get the job done. If you don’t know how fast your actual upload speed is, you can take an online internet speed test to find out.

Upgrading your setup is always a good idea if you’re really into streaming. But if you want to see your community grow and eventually try your luck at being a full-time streamer, know that you could spend Jeff Bezos’ entire fortune on gear and still not get more viewers or subscribers.

For that, you’ll need to work on your content and decide what kind of streamer you want to be—a gamer, a cook, an artist, a musician, or whatever else. The good news is that you don’t have to make up your mind right away, and you can try different things along the way.

“From my experience, streaming is a constantly evolving art form, so finding your ‘thing’ as you go and being open to trying new things has always made sense to me,” Ninja says over email.

Once you decide what you want to stream, it’s time to figure out what kind of entertainer you want to be—your persona. Most people think of streamers as loud, outgoing people who jump up and down every time something cool happens on the screen. If that’s who you want to be, great, but it doesn’t have to be. Maybe you’re not that interested in talking and only want to show your gaming or cooking skills, or maybe you’re a bit shy and prefer more wholesome interactions with your viewers. Whatever your streaming persona is, make it authentic.

“I only talk about things I’m actually hyped about,” Ninja says. “If I was faking it, my audience would read right through that and it just wouldn’t feel right. That’s why whenever I’m asked to give advice to upcoming streamers, that’s what I emphasize—just be you.”

If you ever second-guess yourself, remember the internet is vast, and there’s space for everyone, no matter how quiet or wacky. Also, you can change your mind whenever you want. After all, at least as of the time of writing, there’s no streaming police.

Your approach to streaming will be different depending on what you want to get out of it. If your goal is to make a name for yourself and build a huge community, you’ll need to be strategic. Ninja recommends gamers choose a game and stick with it—at least at the beginning.

“The majority of the time, [people] find you through the game that you’re playing, not through who you are,” he explains in his class.

When it comes to choosing the game, he says it’s better to go for something that’s not so mainstream that a zillion other streamers play it, but is also not so obscure that no one will want to watch. He also explains that every time you switch games, no matter the size of your community, you’re likely to lose half of it, as many people may be tuning in not for you, but for what you’re playing. He only recommends making this jump once you’ve established a following that watches you for you, regardless of what you’re actually doing on camera.

“TikTok is nice because people post clips and it’s the algorithm that shows their stuff to an audience who’s predisposed to liking it”, says Jess Boddy, special projects editor at Popular Science and a streamer known on Twitch as JessCapricorn.

But maybe you’re not in it for the clout or the sponsorships. Maybe you just want to share your skills with the world and have a good time—and that’s totally fine. If that’s your goal and numbers make you a little queasy, Boddy suggests turning off your viewer count. At the start, you’re likely to go live for entire streams without a single view, which can be discouraging given you’re probably not sure what you’re doing yet. She says not knowing how many people (if any) are on the other side of the screen can be calming and make it easier to just have fun.

If you’re an avid stream viewer, you’ve probably noticed some of your favorite streamers go live for hours and hours on end. This might lead you to think that’s the way you find success as a streamer.

But that’s not necessarily true, Boddy says. Moreover, it can even be highly detrimental for your mental health. This is why she suggests setting a schedule with specific days, times, and duration for your streams.

“Being live for at least an hour and a half is good because it takes time for people to trickle in—I notice that I hit my average viewership an hour into my stream,” she explains.

Ninja also believes having a schedule is crucial to protect you from burnout, but he stresses that flexibility is key. If numbers mean anything to you, he says staying just a bit longer on specific occasions might come in your favor.

“Riding the waves is important,” he explains. “Sometimes you’ll be getting close to your end time and you’ll get a raid or your viewership count will go up. Keeping your streaming up can be beneficial for you: it could result in a higher viewership average and get you closer to being a [Twitch] partner.”

Still, this is not an excuse to go overtime on every single stream, so he’s adamant you should treat this as the exception, not the rule.

Setting a schedule also has an extra benefit, Boddy explains: consistency. “I’ve gotten to a point now that my community knows when I go live and they’ll be in the chat before I do, which is a crazy thing to think about, but it’s also very comforting,” she says.

Just go ahead and stream

As with most lessons in life, there’s only so much you can learn about streaming by watching and researching—the best way to master this 21st-century art form is by actually doing it.

So whenever you feel slightly ready, go ahead and start streaming. You’ll learn a lot along the way, and the fact that you probably won’t have many (or any) viewers at first will allow you to tweak your stream without having a huge audience watching when something goes wrong.

[Related: Can playing video games be your full-time job?]

Ninja recommends jumping into the streaming pool and setting daily or weekly goals for yourself. You don’t have to make your debut with a three-hour stream—start small by going live for 30 minutes, and only move to an hour when you’re ready.

Boddy mentions some people can get self-conscious if they know people they know in real life are watching, so they prefer not to tell their friends and family about their streaming until they feel more comfortable doing it. On the flipside, you might want the support of your immediate IRL community when you’re starting out. Do what feels right for you and keep going until you find your comfort zone.

Finally, be patient. Becoming a big deal online always includes a huge luck factor, and that applies to streaming as well. What’s most important is that you have fun and take this as an opportunity to share your beautiful self with the world.