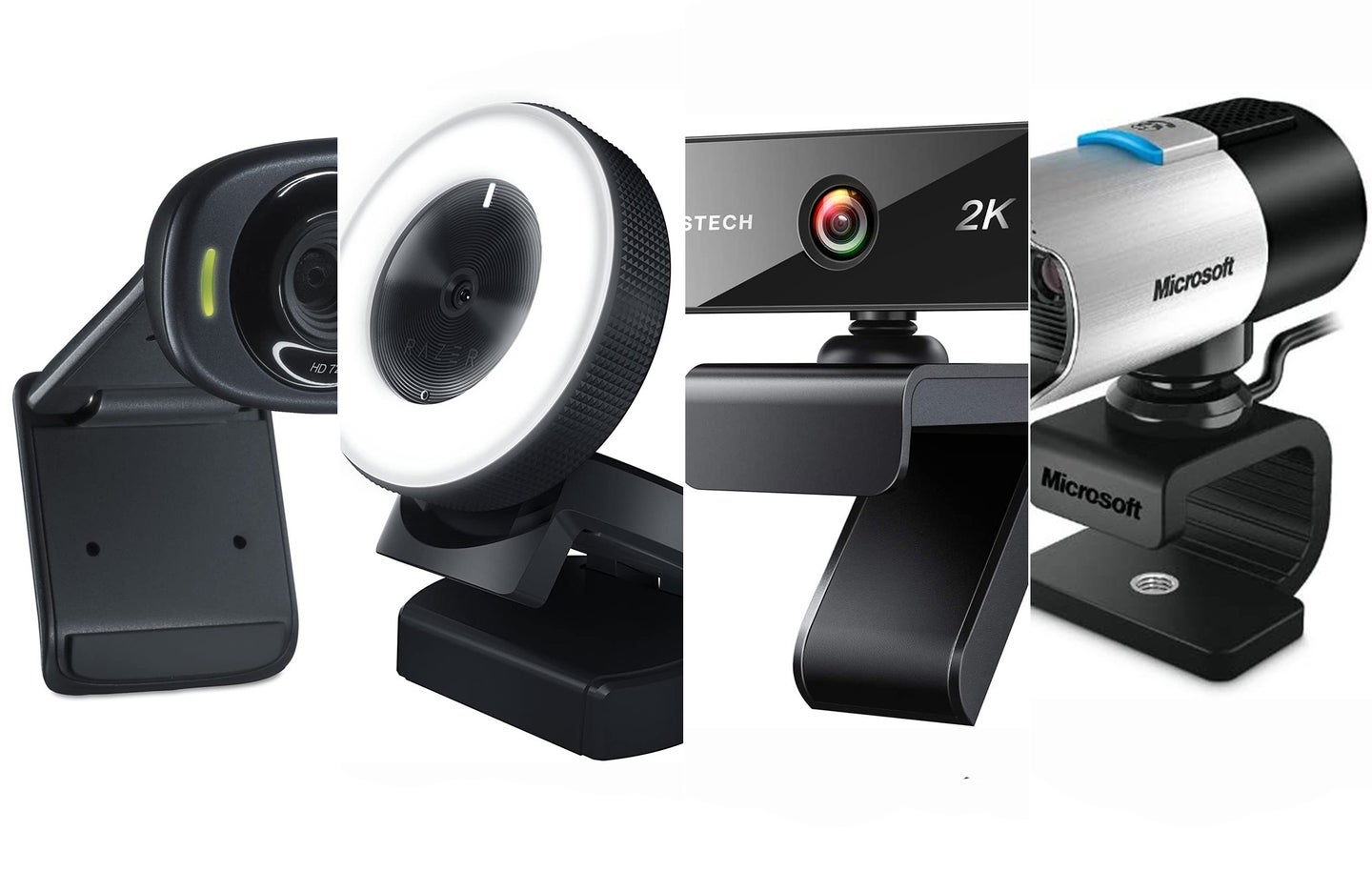 Sometimes, you just need a cheap webcam. Sure, you’ll find cameras on many phones and laptops, but having a dedicated webcam can give you additional freedom to customize your picture. Prices among the best webcams, assuming you aren’t looking for a high-end business-focused model that streams in 4K, are pretty static.

If you don’t want to spend $100 or more, there are also some cheaper models out there. The question is … which one should you buy? With so many to choose from, separating the hidden gems from truly terrible takes a lot of time parsing specs and sifting through Amazon listings.

But what if we told you it doesn’t have to be that hard? We’ve already done a lot of the legwork. Below you’ll find a comprehensive guide to some of the best cheap webcams available right now, including some that are great for business calls, casual Zoom hangouts, and even streaming games.

How we selected the best cheap webcams

When choosing the best cheap webcams, I relied on my own experience using webcams throughout the many years covering the tech industry at PCMag, Popular Mechanics, and CNN, among others. In addition to my own testing, I relied on reviews from critics and users to see which budget webcams were revered as hidden gems, and which ones cost less for a reason.

What to consider when buying one of the best cheap webcams

If price is your only concern, you can just go out and buy the cheapest webcam you can find. In our experience, though, that strategy will leave you disappointed, no matter how much you pay. Before you rush in, look to make sure its basic specs satisfy your needs–its resolution for recording and streaming, frame rate, and other features like a privacy shutter. If you know what you’re looking for, you can get a great webcam without spending hundreds of dollars.

Resolution, or the number of pixels used to create the image captured by your webcam, determines how sharp your picture will look and, broadly, indicates the overall image quality you can expect. If you’re just using it to talk to family and friends on Zoom, then having a high-resolution webcam may not be a big deal for you. At a lower price point, you should expect a minimum resolution of 1280 x 720 pixels, commonly referred to as 720p or HD. There are sharper 1920 x 1080 pixels (1080p) webcams on this list, though you will find that they are on the expensive side of “cheap.”

Frame rate, which determines how smooth your picture looks, is another important factor on any webcam. Most webcams can record and/or stream at somewhere between 30 and 60 frames per second (fps). Most of the webcams on this list shoot at 30fps, particularly those that shoot at a sharper 1080p resolution. A higher frame rate will make your picture look much smoother, but isn’t strictly necessary for your average video call.

Field of view, which determines how wide your camera can see, can be a surprisingly important feature in some webcam setups. Any webcam will have a wide enough view to capture a person’s head and shoulders, but if you’d like to fit multiple people in the shot, or show off the background behind you, then a higher field of view will help.

The best cheap webcams range from truly budget, no-frills options to slightly more expensive models with features we’d recommend at any price. You’ll find a ton of great options below, which should help you equip your PC for whatever video calling or shooting you have in mind without breaking the bank.

Why it made the cut: Logitech’s basic webcam continues to be one of the best cheap webcams around, despite topping out at 720P. If you need a webcam for basic web calls, then this is the perfect option.

Logitech is a staple name in the webcam game and for good reason. Even its cheapest webcam is a staple for PC owners who need a basic camera for video calls. Logitech C310 doesn’t come with many customization options like its more expensive cousins. But, if you just want something that you set on top of your monitor, and don’t mind a 720p picture, then the strong design and Logitech’s general reliability make the C310 a winning piece of hardware.

Why it made the cut: The Microsoft LifeCam Studio is a tried-and-true webcam for work.

Microsoft’s LifeCam Studio has been a go-to office-grade webcam for years. It doesn’t look sleek but does come with a lot of functionality that you’ll find more than useful in work calls. The wide field of view is perfect if you need to make a physical demonstration during a presentation or refer to something in the background of your frame. The ability to rotate it up to 360 degrees can be incredibly helpful for making custom setups on the fly.

Why it made the cut: The Depstech 2K Webcam gives you high-resolution video streaming at a very low price.

It isn’t unusual to see cheaper webcams shooting for the stars with higher resolutions like 1440P, but few manage to do it as well as the Depstech 2K QHD Webcam. After under $30, this camera delivers a wide-viewing angle, as well as support for HDR in videos that you capture. Because of its higher resolution, you can expect smoother and crisp video images. It’s a solid pick if you want to record at a higher resolution while spending as little as possible.

Why it made the cut: The Razer Kiyo webcam brings multiple recording modes, plus tons of customization, and a built-in ring light.

Gaming gear manufacturer Razer has a distinctive piece of kit in its mid-range Razer Kiyo webcam. It’s outfitted with a delightful ring light, which makes sure your face is well-lit, even when your room isn’t. As one of the more expensive options on the list, it also features a ton of customization options and it plays well with livestream production apps like OBS Studio and Streamlabs, making it a fantastic webcam for aspiring streamers.

Why it made the cut: AVerMedia’s Live Streamer 313 webcam brings a lot of versatility to its game capture ecosystem, and pairs perfectly with applications used to stream video games to online platforms like Twitch and YouTube.

Like Razer, AVerMedia has made a name for itself delivering great products designed with gamers in mind. The AVerMedia Live Streamer 313 is a genuinely cheap alternative to the Kiyo, equipped with its own array of useful features. Streaming in either 1080p at 30fps or 720p at 60fps, the Live Streamer 313 features a 360 swivel that lets you reposition the camera, or use it as a dedicated microphone for audio calls. It also features strong configuration options through AVerMedia’s CamEngine software, letting you create the best picture possible.

Why it made the cut: The NexiGo N930P delivers sharp 1080p video streaming and autofocus so your face is always the sharpest thing in sight.

When you look at cheaper webcams, NexiGo comes up often. Of its offerings, we think the NexiGo N930P offers an especially great value. For less than $70, you can stream video in 1080p at 30 frames per second. The real standout, though, is a surprisingly strong autofocus feature that keeps your face from getting upstaged by other elements of your shot.

Recording at 30 frames per second is the most common frame rate for webcams, especially among cheaper models. It isn’t bad but isn’t especially great, either. If you’re looking for the best possible streaming picture, you will want a webcam capable of capturing 60fps.

Q: Is 720P a high enough resolution for a webcam?

The new wave of upgraded devices is rapidly elevating the standard of webcams from 720p to 1080p across devices and dedicated webcams. That said, most people still wind up using 720p at least some of the time, particularly for basic personal and professional video calls. If you’re looking to impress or record for a creative project, though, shoot for 1080p.

While most webcams these days support 1080P or higher resolutions, 720P is still perfectly acceptable for most of your basic work calls and video meetings. However, if you plan to stream or record for videos, then going with a higher resolution is recommended.

Q: Is an external webcam better than a built-in webcam?

External webcams are often better than the webcams built into laptops. It is cheaper and easier to put a high-quality camera in the larger housing of a dedicated webcam than the tiny bezel of a laptop. Many external webcams also come with additional features like privacy shutters for security, and even companion apps to help you customize your picture.

That said, the Covid-19-inspired transition to working from home has increased demand for better webcams. There has been a wave of laptops and other devices launching with improved cameras over the past couple of years, as well as special features for video calls. Unless you just bought a new laptop, though, chances are a built-in webcam will feel like an upgrade.

Normally when we recommend “cheap” or “budget” gear, we have to explain how there are a bunch of caveats and compromises you have to make, even when you’re buying the best models. Right now, the best cheap webcams will work very well for anyone that doesn’t care too much about picture quality or composing their video call window. For less than $100, you can get 720p/60fps or 1080/30fps streaming video, which will ensure you look better than the average person using a laptop webcam. If that doesn’t seem like enough, you may need to spend a little more. If you just want to make sure you’re ready for a Zoom or Teams call, these will work just fine.