Record finished audio on the front end thanks to the Shure MV7 mic’s built-in features. 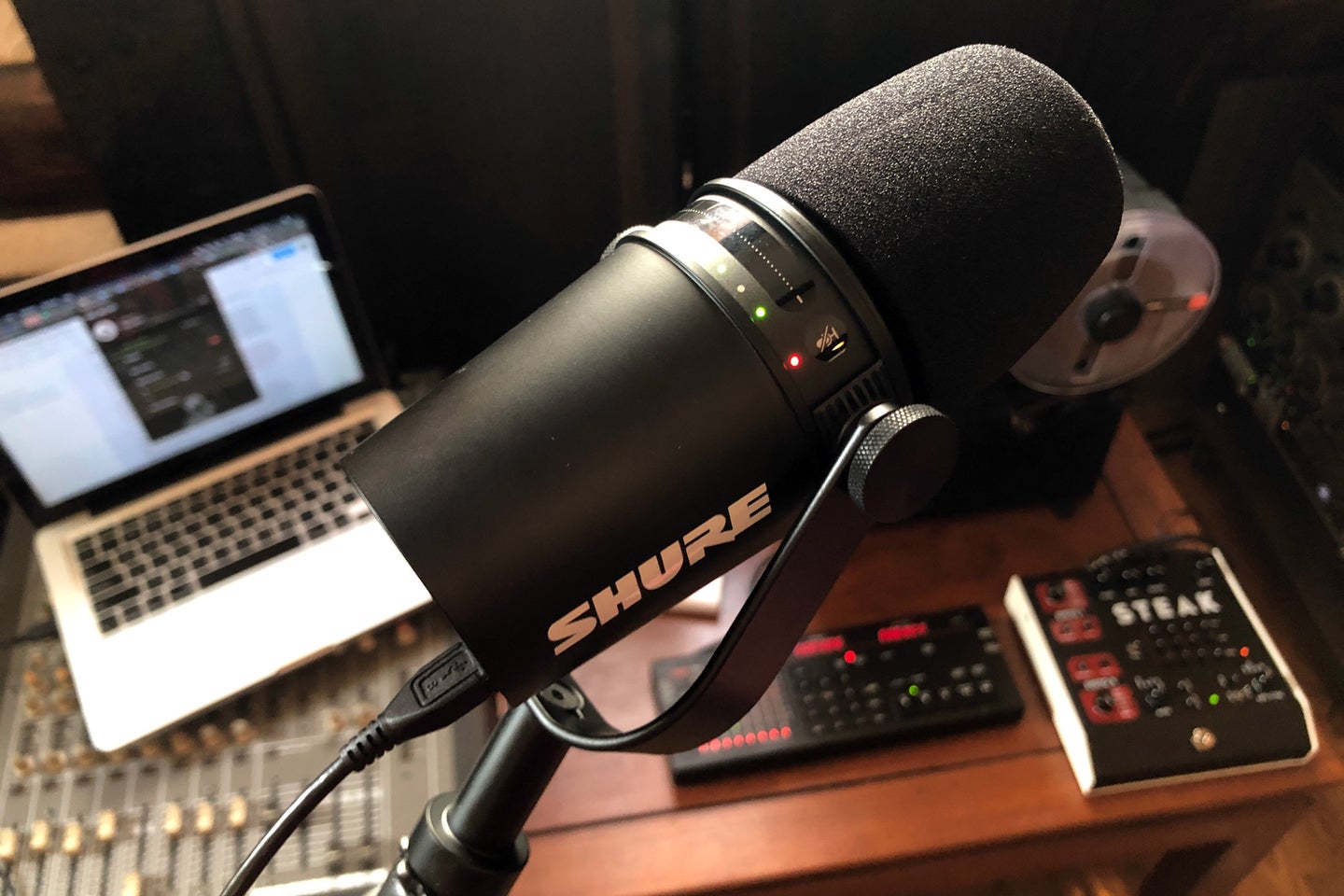 Introduced in late 2020, the Shure MV7 Podcast Microphone is a compact unit that aims to deliver broadcast-ready audio right out of the box to help content creators minimize the need for post-production. A dynamic mic plus interface packed in a durable, studio-quality housing and outfitted with features such as built-in leveling, volume control, and equalization, this podcast equipment is primed to be the centerpiece of any personal recording, live streaming, gaming, or vocal production rig.

With its black metal housing, foam windscreen, and sturdy yoke mount, the MV7 is clearly modeled after the $399 Shure SM7B, which is an industry-standard (reviewed here) to deliver warm, highly focused vocal tones in recording and broadcast studios—think Michael Jackson on “Thriller,” or many of your favorite podcast hosts. Now the $250 MV7 is aiming to become as familiar in compact digital set-ups, capturing a more sensitive but less forward tone at closer to half the cost of its professional mic sibling. And it doesn’t require an initial investment in a preamp, like the SM7B.

Compared to the 7.5-inch, 1.7-pound SM7B, the Shure MV7 is slightly stubbier and lighter at 6 inches and 1.2 pounds, which makes it easier to maneuver on a stand than a typical studio microphone. This can be incredibly advantageous in smaller workspaces, especially due to the fact that it doesn’t require a burly microphone stand to achieve adequate support. On that note, the MV7 doesn’t have an included base, opting instead for a threaded mounting hole. Because of this, bringing your own stand or boom arm is an absolute must if you want to use this microphone in any meaningful way. Many of the best podcast microphones are built ready for desktop use, so the lack of a base on the MV7 may catch some users off guard. Still, that’s not necessarily a deal-breaker; some users may even prefer the flexibility, stability, and saved space that comes from bringing your own attachments to the equation.

Under the Shure MV7’s windscreen is a small mesh housing containing the capsule, which has a highly directional cardioid polar pattern (meaning it’s best used head-on). On the housing’s rear are ample inputs and outputs, with a USB port, XLR port, and a 3.5mm jack. While it can be used with any interface (or I/O-rich field recorder, e.g. the Zoom H8) that would suit the SM7B, the MV7 really shines when it strikes out on its own and takes advantage of its built-in 24-bit/48kHz USB bus-powered interface. Add in the fact that the zero-latency headphone output offers easy monitoring and the MV7 is perfect for reducing the equipment required to capture high-quality voice recordings, especially in streamlined, laptop-based recording situations.

A touch panel is Shure-ly convenient?

On one side of the housing are onboard touch controls, consisting of a volume up and down strip, as well as a pad for toggling between input level and headphone output level. These are very much touch controls, lacking any trace of mechanical or haptic response. Paired with the fact that these controls are very responsive, it was at times difficult to pivot or physically adjust the Shure MV7 without accidentally changing my volume settings. A series of LEDs within the microphone’s touch panel gives the user a clear picture of the current volume level, with green representing microphone volume and orange representing headphone volume.

Getting started with the Shure MV7

Being a hybrid analog-digital design, the Shure MV7 podcast mic’s set-up is a choose-your-own-adventure situation. In XLR mode, it functions exactly the same as any professional mic, so it’s ready to integrate with any existing audio interface or recording setup if you’re so inclined. If you’re starting from square one, however, you’ll likely want to take advantage of its auto-leveling and equalization, which requires a few more connections, a handful of software installations, and just a bit of finesse.

Using the included USB cable, I plugged the MV7 into my computer right out of the box and found that my recording software (Logic Pro on MacOS) didn’t recognize it. Per the included quick start guide, I downloaded the ShurePlus MOTIV software—a standalone control panel/updater—and installed it on my computer, which was quick and painless. Upon opening the app, I was greeted with a simple interface and a prompt to update the microphone’s firmware. After doing so, my computer immediately recognized the microphone and I was off to the races. Yes, you can immediately record with just the XLR output, but if you plan to go digital, install the software ASAP, especially if you’re planning to take the microphone and a laptop anywhere without access to the Internet.

For my tests, I recorded speech and singing samples on the MV7 using my modest recording rig at home (where I’ve used the SM7B as my primary mic for years). I used a microphone stand with a boom arm to mount the MV7 and keep it close at hand. The microphone’s threaded mounting hole appears to feature high-quality machining, which is an oft-overlooked design element that can render a microphone of this design useless early in its lifespan if done sloppily. Getting the MV7 on and off the stand was a snap, and its light weight made the mounting process all the easier.

When used in USB mode, the Shure MV7 podcast mic’s onboard touch panel gives users easy access to basic input and output level adjustments on the fly. However, for granular control and access to all of the microphone’s built-in audio enhancements, like leveling and equalization, users will have to download the MOTIV software from Shure’s site. Requiring a program for full control of hardware isn’t the most elegant solution in a product aimed at plug-and-play functionality but, in this case, it allows the microphone’s design to remain sleek and simple. Because the downloading process was super easy and the software is straightforward, I can’t say that this is much of a drawback.

Your MOTIVation to experiment

The MOTIV software consists of a small window with a simple toggle between auto and manual control modes. Unlike many virtual instruments and plugins, the program applies DSP to the recording signal before it ever reaches your recording software, which “sees” the Shure MV7 as a single-channel audio interface.

Those who’d prefer to hit the ground running and start recording right away will appreciate MOTIV’s volume leveling in auto mode, which also features one-click adjustments for tone and the user’s distance from the microphone. Upon switching to manual mode, the app grants users access to four different equalization presets, an on-screen volume adjustment, four compression settings, and a limiter.

The quality of the audio itself captured by this mic is fantastic—on par with that of other best podcast microphones and even some more expensive studio microphones. The sound of the MV7 in automatic mode was clear and crisp, if not slightly brittle for my voice when compared to the smoother tone of the SM7B. Still, the compression and leveling settings in auto mode left me with a very usable vocal recording that would require hardly any editing for use in a podcast or vlog. Predictably, manual mode requires more tweaking off the bat to get a recording-ready sound, but I appreciated how MOTIV granted a legitimate level of control while still streamlining the configuration process when compared to traditional audio editing software. And it did allow me to narrow the gap between the MV7 and SM7B.

This ability to tailor and shape vocal sound quickly on the front end without having endless potential permutations is a standout feature of the Shure MV7 that allowed me to get the best sound possible for my own needs without wasting potential creative time. For instance, the MOTIV app offers “Near” and “Far” settings to capture users’ voices at a range of distances. Set at Near, the microphone was very responsive and captured a pleasing low-mid beefiness in my voice, while Far (intended if you plan to be positioned a foot or more off the mic, handy if you’re very excitable and sibilant) produced a rather hollow vocal tone and captured much more room and street noise likely due to being over-compressed. That’s something to keep in mind if you’re not investing in room treatments, or you’re taking the microphone into busier environments.

This microphone is fine-tuned to capture spoken word and voice at a production-level standard, and it exhibits a high presence bump in the upper midrange with a gradual downward taper until its response drops significantly at the low end. Paired with the built-in EQ and compression settings, you can capture a somewhat bright sound very similar to what you’d expect from a pro vocal recording after it’s been edited. However, this makes the MV7 less than ideal for capturing instruments with complex low-end and lower midrange information like basses, drums, and guitars. In a pinch, it’ll absolutely work on non-vocal sources, but I recommend using manual mode if doing so and steering clear of the MV7’s compression and EQ since they’re tailored for voice.

So, who should buy the Shure MV7 Podcast Microphone?

Podcast equipment, particularly microphones, come in many shapes and sizes, and the Shure MV7 holds its own against competitors like the $230 Rode Podcaster in terms of function, sound quality, and aesthetics. Quibbles about the initial software download aside, any content creator on a budget would be hard-pressed to find a better alternative, considering the MV7’s built-in interface and plug-and-play design. While it doesn’t best the venerable SM7B sonically, the Shure MV7 Podcast Microphone offers a considerable suite of convenient features and has absolutely earned a well-deserved spot near it among the company’s versatile lineup.