How It Works: The Sturdiest Solid-State Storage 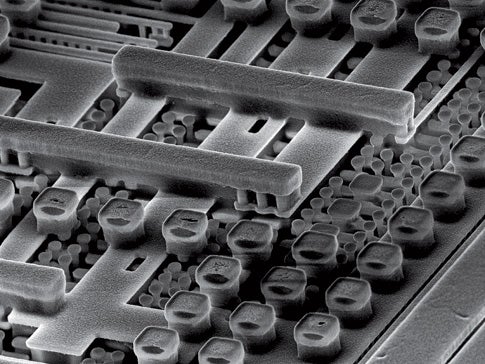 Like a traditional hard drive, a flash-based drive stores information in the computer-readable language of 0s and 1s. But instead of writing data by flipping magnetic poles on a spinning disk, flash memory just shuttles electrons around on a stamp-size microchip.

With no moving parts (except, of course, the electrons), a flash drive eats less power and is more durable than an ordinary hard drive. It can even survive a 10-foot drop. (A hard drive can wipe out your data if its mechanical arm scratches its disk.)

The cost per gigabyte is still high, but it’s falling fast, and flash drives are already starting to appear in some laptops. 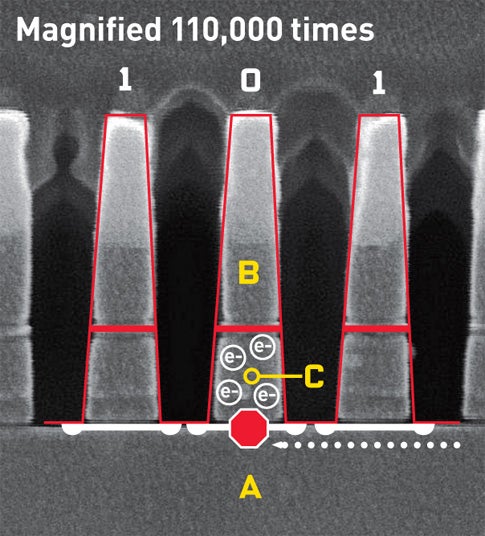 How Flash Memory Saves a File

How Flash Memory Saves a File

Flash memory stores 0s and 1s in millions of miniature transistors, each 1,000 times as thin as a human hair. If the transistor conducts current, the chip reads it as 1; if not, it’s 0. The current flows just underneath the transistor along the chip’s base, or substrate [A].

When the chip is empty, all transistors are set to 1. But when you hit “save,” the chip records data by blocking the current to some transistors, turning them into a 0. To do so, the chip briefly applies 20 volts to a piece of silicon called a control gate [B]. This pulls electrons onto another silicon bit called a floating gate [C], leaving a positively charged area directly below—and breaking up the usual path of electrical current.

The only way to move the electrons and change the pattern of 1s and 0s—thereby changing your data—is by applying precise voltages to the transistors. That means even kicking your laptop won’t erase your file.