How Your Laptop Will Just Keep Getting Faster 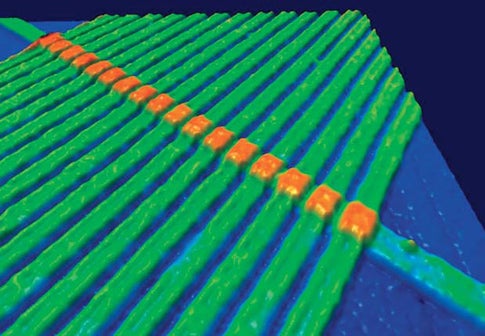 Since the invention of the transistor, silicon semiconductors have been king. But now silicon-based transistors are nearing the limit of their potential. Excess heat and manufacturing hurdles are impeding the development of ever-faster and -smaller processors. Advances in materials and chip design to resist extreme heat and move huge amounts of data, quickly, will be crucial. Experts are exploring three technologies to overcome these challenges: spintronics, graphene and memristors. They are what will someday make ultra-energy-efficient supercomputers small enough to fit anywhere—even in the palm of your hand.

Accessing data, whether stored in a spinning hard drive or in flash-based memory, is a time-suck and a power hog. The dynamic RAM that rapidly delivers data to the processor is almost maxed out. “Both technologies for the magnetic hard disk and D-RAM are within a few generations of hitting brick walls,” says R. Stanley Williams of HP Labs’s Information and Quantum Systems Lab. He believes that circuits called memristors could be the solution. Memristors recently joined the resistor, capacitor and inductor as the fourth fundamental circuit element. But unlike the others, a memristor has the unusual ability to remember the last resistance it held, even when the power is turned off. When the current starts up again, the resistance of the circuit will be the same as it was before, providing instant-on computers. After the memristor had spent some 30 years as a theory, Williams and his team designed the first one earlier this year. Five years from now, he says, the chips could sit in computers between D-RAM and hard disks to eliminate the boot-up process. Further down the road, memristors, which have higher storage densities than the best flash memory and faster write times than D-RAM, could supplant both technologies in one fell swoop. 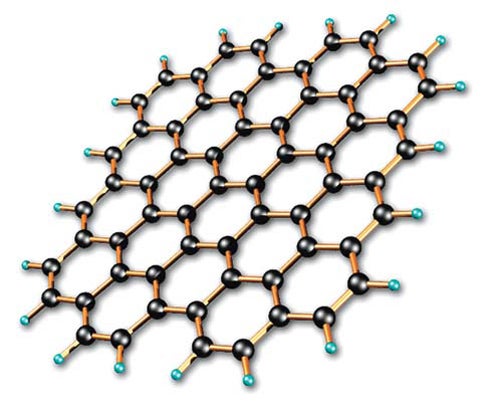 Carbon Futures: Graphene is a single layer of carbon atoms

Heat is one major stumbling block to smaller, speedier processors; as heat increases, it becomes harder for electrons to move through most materials. But a novel twist on an age-old material might prove to be the key. Graphite is made of thin layers of interconnected carbon atoms. Four years ago, researchers at the University of Manchester in England tested the electronic properties of a single sheet of this carbon, known as graphene, sparking interest in what may be an entirely new branch of semiconductors. This past April, they built the world’s smallest transistor—one atom thick and 10 atoms wide—with the material. Unlike electrons in silicon, those in graphene can travel unimpeded for long distances. This efficiency, which is up to 100 times that of silicon, allows for ultrafast electronic devices that don’t overheat (collisions cause heat). In addition to transistors, researchers hope to develop graphene wires that would transport electrons from one area of a chip to another much faster than current materials can. 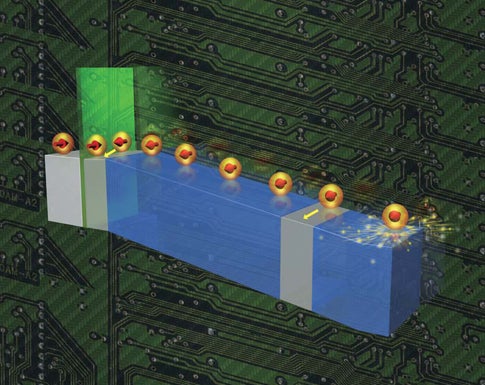 Most electronic devices read data—the 1s and 0s of binary code—by measuring the presence or absence of an electrical charge. In the past decade, however, scientists have suggested that individual electrons could be turned into single 1s or 0s. Every electron has a magnetic pole and corresponding “spin.” But instead of clockwise or counterclockwise, researchers distinguish electron spins by their orientation: up or down, 1 or 0.

Until recently, scientists had been able to control and detect electron spin (which allows the devices to operate at lower power) in semiconductors such as gallium arsenide, a material used in laser diodes, but not in silicon—a major hurdle because the entire infrastructure of computer manufacturing is still ruled by techniques used with silicon. Finally, last year Ian Appelbaum, now a physics professor at the University of Maryland, shot groups of electrons with aligned spins across 350 microns of silicon and determined the final angle of their spin. In another development, Igor Zutic and his colleagues at the State University of New York at Buffalo have shown that if you align the spins of electrons in a semiconductor laser, it operates at lower power. Such lasers could transfer up to 1,000 times as much data between different parts of a computer as the copper wires used today. 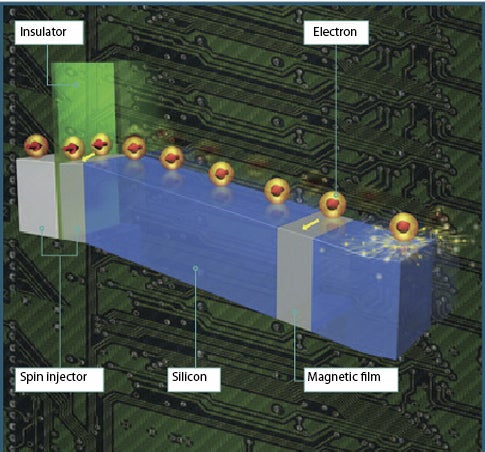 Right Stuff: Only electrons that have the proper “spin” get through to the end, where their charge is detected

1. Inject electrons
The spin injector comprises two metals, one of which is magnetic, separated by an ultra-thin insulator. Apply a voltage between the two metals, and the electrons tunnel from the non-magnetic metal to the magnetic one.

2. Filter
The electron continues only if the spin matches the direction of the magnetic material. If the alignment doesn’t match, the electron will “scatter.”

3. Travel through the silicon
Electrons travel 350 microns through silicon while maintaining aligned spins—crucial because electrons need to travel between intrachip devices.

4. Detect 1s and 0s
Electrons are pushed out through a thin film of magnetic metal like a ski jumper. If the electron’s spin direction matches the magnetization of the film, it will land on a nearby semiconductor, where its charge is detected (say, a “1”). Mismatched electrons are
shunted elsewhere (a “0”).